The presidential election is less than a week away, and the future of the country hangs in the balance.

The policy differences between the two candidates, President Trump and former Vice President Joe Biden, are stark, with disagreements on tax policy, the environment, and the coronavirus pandemic. But one important gap that's often been overlooked is on the minimum wage.

Biden supports raising the federal minimum wage from $7.25/hour to $15/hour, and states it clearly on his website. Trump, on the other hand, has often demurred on the issue and believes it should be up to the states. In the last debate, he said, "I think it should be a state option. Alabama is different than New York. New York is different from Vermont. Every state is different."

The minimum wage has not been raised since 2009, when it was lifted from $5.15/hour to $7.25/hour over a three-year period, and changing it now would require legislation from Congress. Currently, 21 states use the federal standard of $7.25/hour, but a hike all the way to $15/hour would mean higher base pay rates in every state -- California currently offers the highest minimum wage at $13/hour.

Only about 2 million workers make the federal minimum wage or less, but a study from the Brookings Institution found that 53 million Americans work low-wage jobs that pay median annual salaries of about $18,000. A minimum wage hike to $15/hour would have a huge impact on the lives of those individuals, as well as the broader economy.

Let's take a look at why Amazon (NASDAQ:AMZN), Dollar General (NYSE:DG), and Western Union (NYSE:WU) would all be big winners if Joe Biden wins and raises the federal minimum wage all the way to $15/hour. 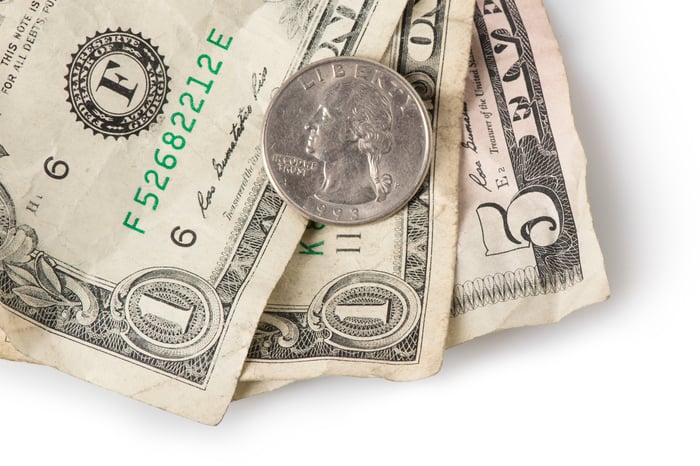 Amazon is no stranger to labor disputes. The company has been on the receiving end of mountains of criticism over harsh working conditions in its warehouses, and more recently has been accused of not taking adequate safety precautions during the coronavirus pandemic. For a long time, Amazon was also vilified for underpaying workers, but the e-commerce giant responded to criticisms from Senator Bernie Sanders and others and raised its minimum wage to $15/hour in 2018.

Amazon CEO Jeff Bezos touted the move in his shareholder letter the following year, and taunted his rivals, saying, "Today I challenge our top retail competitors (you know who you are!) to match our employee benefits and our $15 minimum wage. Do it! Better yet, go to $16 and throw the gauntlet back at us. It's a kind of competition that will benefit everyone."

Bezos's call may appear to be benevolent, but there are selfish motives. One of the tech giant's structural advantages is that its business is not as dependent on labor as a typical retail store, and warehouse jobs tend to pay better than those in retail stores. Walmart, for example, pays better wages in its warehouses than in its stores. Therefore, a $15/hour minimum wage would force many of Amazon's competitors, including Walmart, grocery chains, big box stores, and independent retailers to hike their wages against what may be in the best interests of their businesses. That will leave them with less money to reinvest in their businesses, and ultimately lower profits, widening Amazon's already substantial advantage over them. Amazon may choose to raise its own minimum wage to attract labor, but the company has the luxury of making that choice, rather than being pressured by the government.

A $15 minimum wage, therefore, could hasten the transition from an already reeling brick-and-mortar retail sector to e-commerce, favoring Amazon.

Dollar General has built an empire of discount stores by catering to low-income Americans in mostly rural parts of the country. The company offers small pack sizes and low prices on items ranging from essentials like food and toilet paper to more discretionary products like toys, clothes, and home decor.

In other words, Dollar General's clientele is just the type most likely to benefit from a higher minimum wage and spend more at its stores. In its risk factors, Dollar General says, "Many of our customers have fixed or low incomes and limited discretionary spending dollars. Any factor that could adversely affect their disposable income could decrease our customers' spending or cause them to shift their spending to our lower margin product choices, which could result in materially decreased sales and profitability." Conversely, it should see an increase in spending should its customers make more money, lifting its sales and profitability.

The Economic Policy Institute estimated that the three-year process to raise the minimum wage from $5.15/hour to $7.25/hour added $10.4 billion in annual consumer spending. Considering that Dollar General now operates more than 16,000 stores across the country and will bring in around $30 billion in sales this year, it's likely to benefit from another minimum wage hike.

Global money transfer giant Western union may best be known for its "Everybody needs some money sometime" jingle, but the company's business has come to rely overwhelmingly on migrants and the remittances they send home.

In 2015, then-CEO Hikmet Ersek told The Washington Post that about 60% of the company's customers were migrants sending money back home and the U.S. outbound market was its largest market, with migrant workers sending money back to India as the biggest recipient, followed by Mexico, the Philippines, and China.

More recently, in its last annual report the company said, "Our Consumer-to-Consumer money transfer business relies in large part on migration, which brings workers to countries with greater economic opportunities than those available in their native countries. A significant portion of money transfers are sent by international migrants."

While Western Union has struggled during the global pandemic -- which has weighed on the global economy, especially sectors with high migrant labor rates like hospitality, and has impeded the flow of migrants -- the company would be one of the biggest winners from a higher minimum wage, as it would lift worker pay in both the legal and the shadow economy, boosting remittances home from those workers.

Approximately $150 billion was sent out of the U.S. to other countries in 2017, and that number would almost certainly surge if the minimum wage more than doubled.