DBV Technologies (NASDAQ:DBVT) is a clinical-stage biopharmaceutical company based in France that specializes in developing treatments for food allergies. On Monday, the company announced that the European Medicines Agency (EMA) had validated its Marketing Authorization Application (MAA) for Viaskin, a potential treatment for peanut allergy. As a result of this news, shares of DBV Technologies are skyrocketing today and are up by 43% as of 11:57 a.m. EST, after rising by as much as 82.5% earlier today.

Viaskin is a patch that is supposed to desensitize a patient's immune system by exposing the patient to increased amounts of peanut protein. Now that the EMA has officially validated DBV Technologies' MAA for Viaskin, the formal review process for the potential allergy treatment can begin. It is worth noting that the company also tried to have Viaskin approved by the U.S. Food and Drug Administration (FDA), but its application hit a roadblock. 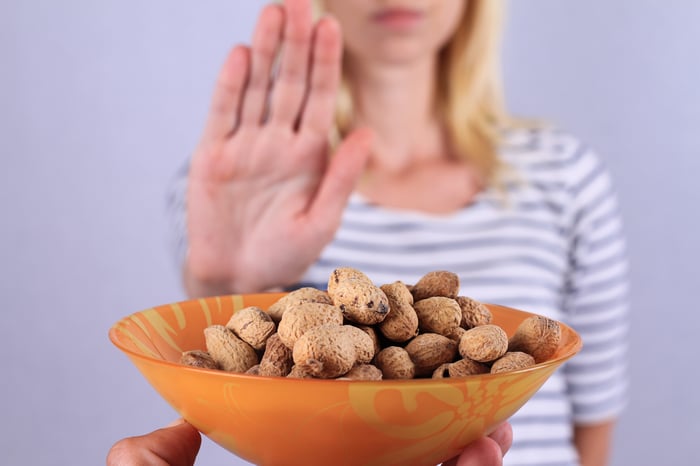 Earlier this year, the FDA expressed concerns regarding the effect of patch adhesion on the efficacy of Viaskin. Although DBV Technologies tried to address the issues raised by the health industry regulator, the FDA still decided to reject its application. The healthcare company is currently in talks with the FDA to discuss the next steps in the process toward regulatory licensure for Viaskin in the U.S.

Peanut allergy is one of the most prevalent food allergies, and if Viaskin goes on to receive approval from the EMA, DBV Technologies could benefit immensely. However, the future of Viaskin is currently uncertain in the U.S., and it faces competition from another peanut allergy treatment called Palforzia that was approved by the FDA in January 2020.

Palforzia, which is also being reviewed by the EMA, is marketed by Aimmune Therapeutics. In other words, even if Viaskin is approved, it will face competition from Palforzia. In light of these two factors, and although today's news is good for DBV Technologies and its shareholders, it is important for investors to temper their expectations.