Could General Electric (NYSE:GE)finally be on the verge of a turnaround? For the first time in a long time, at appears possible.

Such a shift would certainly be welcomed by shareholders. Expectations of current CEO Larry Culp were high when he was hired in late-2018, but he inherited a mess that's been exacerbated by coronavirus headaches. His overhaul has been lackluster thus far.

There's a glimmer of hope shining on the horizon though. GE's power business -- heavy equipment used to generate electricity -- seems to be stabilizing after years of deterioration. Even a modest recovery on this front could lift the company's results in a big way, as it was at one time GE's biggest business. 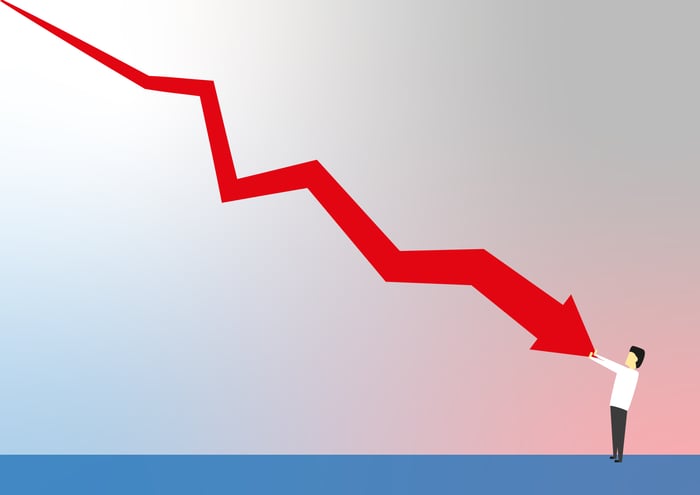 GE Power runs out of gas

Investors who've followed General Electric for the long haul know the story all too well. In 2016, GE's power division produced $26.8 billion worth of sales, making it the company's biggest single unit, accounting (at the time) for roughly one-fifth of General Electric's sales. Power's income of $5 billion that year drove more than one-fourth of GE's 2016 profits.

Things changed dramatically in the meantime. Through the first three quarters of the current year, power has produced $12.2 billion worth of revenue, with $4 billion of it materializing during the three-month stretch ending in September. That puts it on pace for 2020 sales of a little over $16 billion, and perhaps a bit better than a breakeven.

What happened? A combination of factors contributed to the demise of GE's power business, but two stand out.

One of them was (and still is) the advent of alternative renewable energy solutions, and solar in particular. They're now cost effective enough and more socially palatable than fossil fuel produced electricity, undercutting demand for GE's gas turbines and coal-burning power equipment from utility companies. For perspective, more than 70 gigawatts' worth of solar power infrastructure was put into place in 2016, and 2019's installations are closer to 115 gigawatts.

The other impasse was unique to General Electric. In 2018, a design flaw of its then-new gas turbines was uncovered. Namely, some of the newer turbines' fan blades were oxidizing, making them unsuitable for safe and reliable use.

GE Power's President and CEO Russell Stokes assured shareholders and customers in September of that year that a fix was in the works. Of course, for a turbine that takes years to develop, even a simple fix can take months just to begin implementing. There's also the matter of its dented reputation. All told, in 2018 GE sold 60 fewer gas turbines than it did the year before. That coincides with a double-digit dip in revenue decline including a sizable drop in its lucrative service business that keeps General Electric's equipment up and running.

Replacements of the faulty fan blades began shortly thereafter. Reuters reported the fix was simply the return to an older method of casting these blades.

This repair work of course wasn't covered by the media as fervently as the oxidation matter was, but power providers noticed...and started to believe again. General Electric sold 13 fewer turbines in 2019 than it did in 2018, but orders of turbines increased by 52 units last year. The power division's orders and revenue have cooled just a bit this COVID-crimped year, but as the graphic below shows, both revenue and orders are somewhat stabilizing. 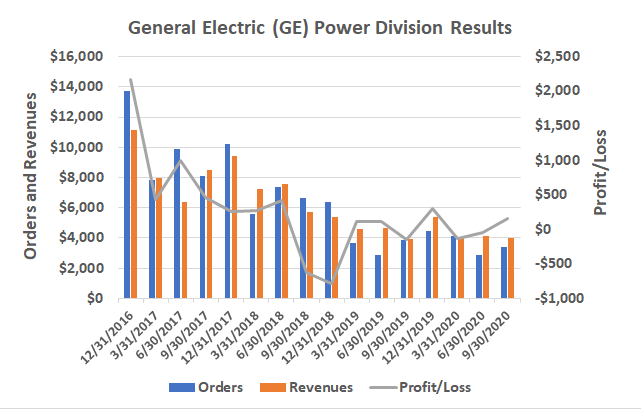 Not shown on the chart is another important shift. Last quarter's services revenue was in line with Q3-2019's levels, and sales specific to its gas power arm were up year over year. Its smaller steam/coal business is the weak point of the overall power unit, but softness on this front was inevitable. General Electric explained in its quarterly filing that "steam equipment revenues also decreased primarily driven by project timing."

It's a start, even if not a thrilling one.

In the meantime the tech remains marketable enough overseas. Australia recently installed new GE-made power turbines, and Vietnam's state-owned electric utility just inked a deal with GE to secure parts and service that will keep its electricity-producing turbines spinning into the foreseeable future.

This largely overlooked dynamic may be why GE's power business is leveling off rather than continuing to unravel. Although the power unit's backlog has dwindled from $85.3 billion as of the end of 2019 to $79.3 billion as of the end of September, consider the backdrop. COVID-19 has presented logistical challenges. One must also consider that nearly 80% of this backlog is linked to services rather than equipment sales. Tepid orders for new turbines in 2018 and 2019 negated the need for new service contracts then. But, rekindled purchases of turbines should in turn rekindle its higher-margin business accordingly, even if slowly.

Point being, GE's power-generating gas turbine business -- and its smaller coal power business-look like they've contracted about as much as they can. It will probably take some time to travel it, but there's finally a plausible, cash-rich growth path ahead. That's a nice change in itself.