Stocks were once again mixed on Wednesday, but in general, the broader market was largely higher. The Dow Jones Industrial Average (DJINDICES:^DJI) lagged behind with small losses, but the S&P 500 (SNPINDEX:^GSPC) and the Nasdaq Composite made up for the Dow's lack of follow-through from Tuesday.

Smart investors look for trends that will help companies that take advantage of them produce immense profits. One such trend that's taken hold with a vengeance in recent years is the rise of the gig economy, and companies that seek to capitalize on freelance work by acting as intermediaries stand to benefit immensely as traditional employment practices give way to financial reality.

A nice gain for gig-economy stocks

Wednesday was a good day for the gig economy. Shares of Upwork (NASDAQ:UPWK), which offers a marketplace for gig workers and potential buyers of services to find each other, jumped 14% on Wednesday. Fiverr International (NYSE:FVRR), which has a similar service geared toward tech-related services, was higher by 18% on the day.

The business models that Upwork and Fiverr have are designed to profit from the rise of the gig economy. Both companies charge fees to participate, taking a portion of what service buyers are willing to pay freelancers as their revenue. 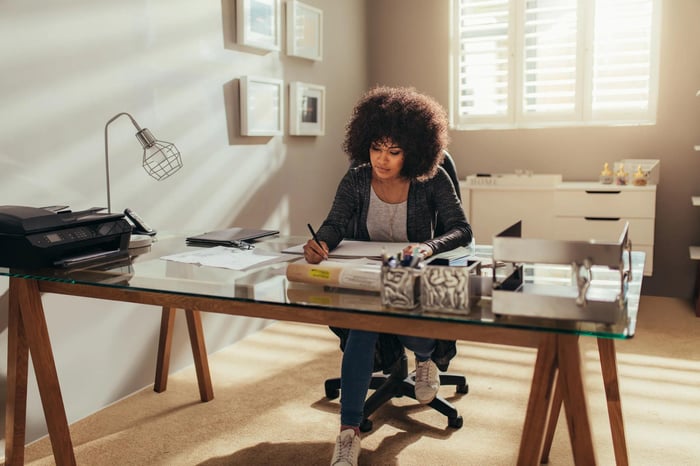 Moreover, there's demand from both sides. Employers don't want to hire full-time employees, as they come with high costs for salary and benefits as well as the overhead expenses necessary to provide a place for them to work. Meanwhile, gig workers increasingly want the flexibility that traditional employment lacks. Even as the early lockdowns of the COVID-19 pandemic have given way to a return to work, the ability to work from home or in other remote locations makes gig work more attractive than it was in the past. Traditional employment has largely lost its job security, taking away one of its key advantages.

Both companies recently gave financial updates to shareholders. Upwork saw revenue rise 24% to a new record, with service fees climbing at a 26% pace. Meanwhile, Fiverr believes that the U.S. gig economy is a $115 billion market, and it has tapped into only a small portion of that market thus far.

What could hurt gig economy stocks?

However, the gig economy still has some hurdles. There's a widespread belief that as soon as the COVID-19 pandemic is over, people will want to return to more traditional forms of work. That's a big part of what sent Upwork, Fiverr, and other gig-focused stocks down sharply on Monday when news of a possible coronavirus vaccine broke.

It's also uncertain to what extent gig-marketplace companies like Fiverr and Upwork can defend themselves from competition. On one hand, employers and workers have incentives to try to cut out the intermediary, especially because the fees that Upwork and Fiverr charge can be excessive in some people's eyes. On the other hand, it isn't necessarily difficult to set up an online marketplace for gig workers and those needing services to connect, opening up Fiverr and Upwork to competitive pressures.

As with many winning trends, the current players in the gig economy might not prove to be the top stocks in the long run. Nevertheless, the transition toward a gig economy is here, and it's not likely to reverse course anytime soon. That makes it an interesting trend for investors to look at as they consider how best to invest in stocks .