At first blush, you might think that Shopify (NYSE:SHOP) had an underwhelming third quarter. After all, the company -- which provides a platform for just about anyone to establish an e-commerce presence -- has seen its stock fall over 10% since announcing results.

Nothing could be further from the truth. Growth stock investors should be reassured knowing that on virtually every metric, Shopify is winning over tons of customers. But there's one underappreciated metric that really points to how well the company is actually doing ... and will continue to do. 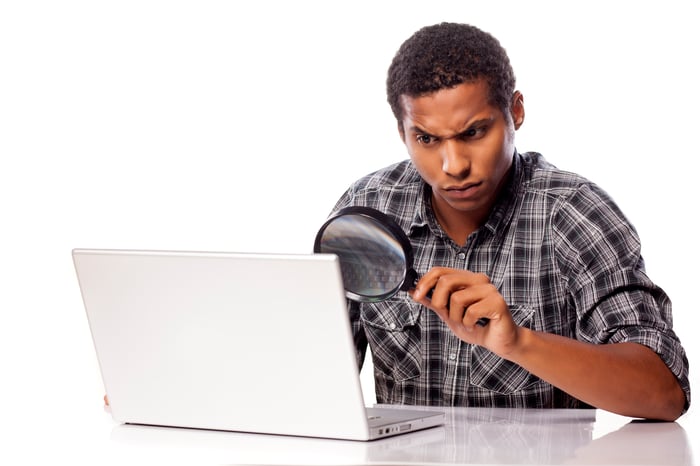 We'll get to that metric in a moment. But let's recap Shopify's third quarter with the headline numbers.

Let's walk through this step by step.

Put all these pieces together, and you have a company that is quickly becoming the most powerful North American e-commerce juggernaut not named Amazon.

When the pandemic hit, Shopify made it easier for merchants to sign up and kick the tires on the platform. It extended the window for free trials to 90 days, up from the standard 14-day trial. This provided enough time for businesses of all sizes to make a transition without incurring any costs. If those customers liked what they saw (and were able to stay in business), they would become paying customers.

Or at least that's the narrative many investors (myself included) created. When the company revealed this tidbit about monthly recurring revenue (MRR), it became clear that narrative was true. 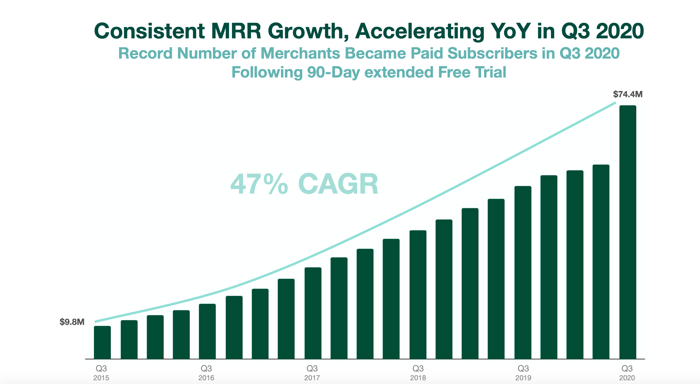 As you can see, MRR growth was slowing coming into the third quarter, but once that 90-day window for trials closed, it exploded to over $74 million. For those keeping track at home, that annualizes to almost $900 million in practically guaranteed revenue without a single sale taking place on the platform.

What's more, the management pointed out on the earnings call that there would have been a record number of sign-ups even without the effect of the 90-day window closing.

Shopify president Harley Finkelstein said, "In Q3, a record number of merchants became paid subscribers to Shopify, even excluding merchants who converted following the end of their 90-day extended free trial. The extended free trial made it easier for new stores to get online fast and make sales, enabling many of these entrepreneurs to generate cash while their physical stores were shut down at the onset of the pandemic."

The moat gets wider

Why does all this matter? Because Shopify has an enormous moat. Consider:

The bottom line: Once merchants enter Shopify's ecosystem, they're likely there for good. It's true many of these businesses will fail, but that's how a functioning economy is supposed to work. With so many merchants joining in such a short time, Shopify just wove an enormous web that promises to deliver even more successful merchants in the years to come.

Yes, Shopify stock has trended down in the past month. But no, you shouldn't worry too much. Let's not forget that the stock has nearly tripled since bottoming out in mid-March. We shouldn't be worrying too much over short-term moves.

The company's MRR growth is a vital indicator that the pipeline for future growth is strong. With Shopify already accounting for over 14% of my real-life holdings, I won't be adding shares, but I surely won't be selling anytime soon, either.