Over the last four years, AES (NYSE:AES) has undergone a turnaround. It went from being an international electrical utility operator with substantial earnings volatility to a renewable energy leader with growing earnings, an impressive project pipeline, and an S&P 500-beating stock with a generous dividend. AES' recent earnings call reveals where the company is headed in the short term. Judging by the company's track record in recent years and its performance through the COVID-19 pandemic, AES may be a utility stock worth paying attention to.

From volatility to stability

One of the key issues that AES faced in years past was its revenue and earnings volatility. This was because, unlike many U.S.-based utilities, AES also builds and operates power plants in the developing world, with currencies that fluctuate against the U.S. dollar, and made energy primarily from sources that can fluctuate significantly in price and availability -- primarily fossil fuels and hydro (or dams).

However, since 2016, AES has been focusing on three areas to achieve a more stable business model: selling the energy it generates via long-term take-or-pay contracts, executing these contracts in dollar-denominated currencies with credit-worthy clients, and stabilizing the costs it incurs to make the energy it sells. 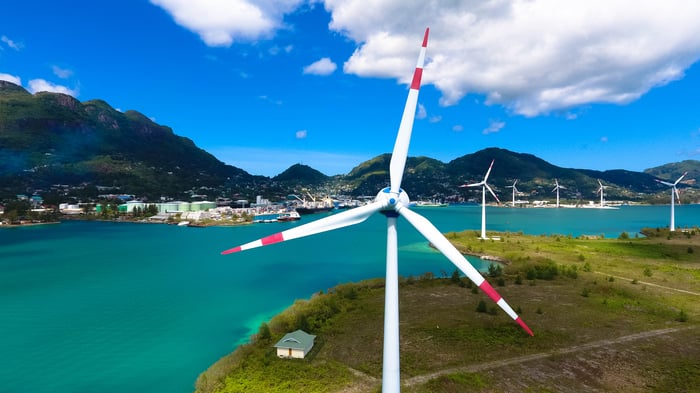 To stabilize its generation costs, the company turned toward renewable energy as its price became more and more competitive with traditional fossil fuels. This is in part because once a plant is built the cost of the energy generated isn't subject to swings in the price of fuel.

As a consequence, during its third-quarter 2020 earnings call, the company announced 6.8 gigawatts (GW) in signed contracts, plus additional projects at varying stages of development, for a total pipeline of 25 GW in renewable energy projects worldwide. To put this into perspective, during its earnings call a year ago, the company set an expectation to "become one of the world's largest renewable developers" by signing up "2-3GW per year" in renewable energy projects. A 6.8 GW backlog and 25 GW in total project pipeline is large by any standard: NextEra Energy (NYSE:NEE), the largest utility in the U.S. and the fourth cleanest utility in the world, predicted a 19.8 GW renewable energy pipeline of expected projects by 2022.

The company is also lowering its greenhouse emissions for another reason. Large investors, such as Norges Bank -- the central bank of Norway, managing of one of the world's largest sovereign wealth funds  -- and others, have indicated their reluctance to continue to invest in companies that are deemed to not be doing enough to address the climate crisis. As a result, AES announced it was selling its coal generation assets, thus lowering the percentage of energy it produces from coal to just under 30%, ahead of schedule and under the threshold set by the Norwegians. Access to debt is key for companies developing large infrastructure projects.

Where the company is headed

During the earnings call the company indicated it expected its 2020 earnings to be at the top end of the ranges of its guidance for adjusted EPS and free cash flow -- somewhere around $1.42 earnings per share, or EPS, or about 4% above its 2019 EPS figure. This level of resiliency is remarkable in a year struck by the worldwide COVID-19 pandemic and a 25% devaluation of the Argentinian peso -- one of the countries where the company still sells some energy in local currency. This is a welcome change for a company that did not fare so well only a few years ago when faced with a drought and a currency devaluation in just one country -- Brazil.

Furthermore, the company reiterated its guidance of growing its adjusted earnings per share an average of 7% to 9% annually. Again, for reference, during its last earnings call, NextEra projected an adjusted EPS growth rate of 6% to 8%  for 2021. 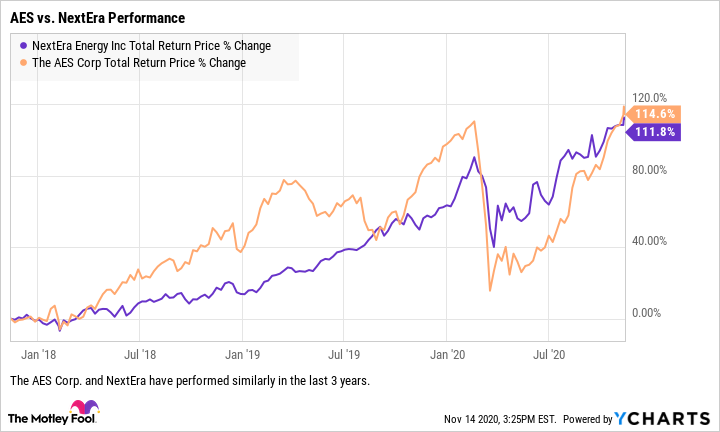 So, is AES the next NextEra? That's impossible to say for sure. While its stock price has outperformed NextEra's for most of the last 3 years, NextEra has a longer track record growing its bottom line and producing consistent results. And AES still has a little ways to go before it catches up to NextEra in terms of improving its credit rating -- and thus, its borrowing costs. Yet more and more, AES is looking like a utility that has executed a successful turnaround and is now a company with lots of room to grow internationally and in the U.S., plus a clear strategy to do so profitably.