Please ensure Javascript is enabled for purposes of website accessibility
Free Article Join Over 1 Million Premium Members And Get More In-Depth Stock Guidance and Research
By Reuben Gregg Brewer - Nov 20, 2020 at 11:30AM

Exxon is trying to do two big things at once, and they are at odds with each other. This issue is unlikely to go away anytime soon.

The first big issue facing ExxonMobil ( XOM 1.12% ) today is the painfully low price of oil. That problem has set up a massive struggle for the global energy giant as it tries to maintain its dividend while continuing to invest in the projects it needs to sustain and grow production. And there's no easy solution.

The rise of the United States as a more material global producer of oil and gas in recent years pushed the world into a situation where supply was exceeding demand. It was a manageable imbalance, with OPEC working to cut supply to make room for expanding U.S. energy production. The global pandemic, however, and the economic shutdowns being used to slow its spread, have upended the situation. A massive decline in demand resulted in a vast oversupply in the energy industry. Oil prices plummeted, and excess production ended up in storage. 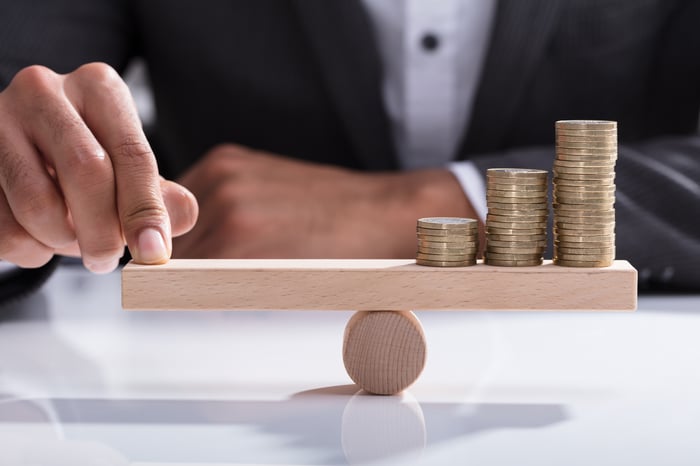 That's the environment in which Exxon and its peers are operating today. And it's not likely to improve over the short term. First demand needs to increase, which will likely require the successful development, production, and distribution of a coronavirus vaccine. And then all of the excess oil sitting in storage needs to be worked off. Until that happens, oil companies like Exxon will likely be facing lingering low energy prices.

This is a terrible situation for the industry, but it's particularly troublesome for Exxon. Prior to the pandemic, the company had embarked on a multi-year investment program, with plans to spend as much as $30 billion a year through 2025. The goal was to reverse the company's declining production numbers. But with energy prices so low, things haven't worked out as planned. Through the first nine months of 2020, for example, the company's capital spending was lower by around 25% year-over-year. The company is working on further cuts for 2021, and expects capital spending to be as low as $16 billion -- roughly half the $30 billion high-end figure it was targeting in its pre-COVID-19 plans.

If capital spending were the only issue there wouldn't be a problem. Exxon has a strong balance sheet, with a debt to equity ratio of roughly 0.4 times. That's not outlandish, and in fact is toward the lower end of its peer group. The company's cost reduction efforts and asset sales would probably be enough to allow the oil and gas giant to muddle through this rough patch in relative stride. However, it also needs to keep investing if it wants to maintain and grow production. It can stretch out its plans and prune its actual spending so it is putting cash to work in the most advantageous projects, but it still needs to spend.

That bumps up against the other big cash drain at Exxon: its dividend. It's a big nut to crack, too, on the spending front. To put a number on that, through the first nine months of 2020 Exxon used roughly $15.2 billion worth of cash on its capital investment activities, and paid out nearly $11.2 billion worth of dividends. Since the company lost $2.3 billion over that span, its business clearly wasn't able to cover its dividends and capital investment. That explains why long-term debt had increased by nearly 80% year-over-year by the end of the third quarter. Exxon is using its balance sheet to help cover the cash shortfall it's facing because of low energy prices. 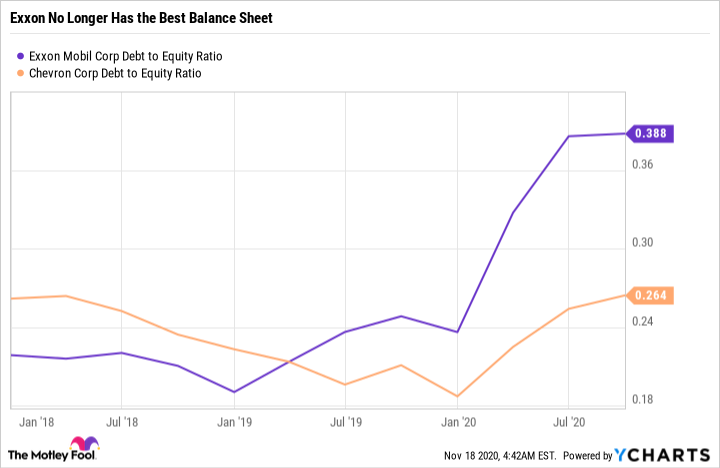 Some investors fear that the company's over-three-decade-long streak of annual dividend increases is nearing an end. That helps explain why the stock's yield is a huge 9%. That's a very real concern, given that the dividend is costly to maintain and Exxon's spending plans really aren't optional, and it would require a material and sustained increase in oil prices to solve this problem. But that doesn't appear likely today, and even after the world moves past COVID-19 the supply/demand imbalance won't resolve itself overnight because of the excess oil sitting in storage.

Walking on a tightrope

At the end of the day, the next five years are going to be tense for ExxonMobil and its shareholders. The Energy giant is going to have a difficult time maintaining both its dividend and its capital spending plans unless oil rebounds, which doesn't seem like a very likely outcome over the near term. The capital spending cuts and asset sales it is making to help balance the math out right now, meanwhile, could end up hampering its plans over the longer term. Indeed, you can only cut so far before you hit bone.

While the company itself is likely to make it through just fine, the next five years are going to be tough, and dividend investors could find that they get left out in the cold. Risk-averse investors might want to rethink this name, since it could quite literally take the next five years to resolve all of the headwinds Exxon is facing today.