There are an estimated 463 million people in the world with diabetes, only half of whom are diagnosed. The disease is a major cause of stroke, kidney failure, blindness, heart attacks, and lower limb amputation. Just in the U.S., the percentage of people with diabetes has increased from less than 1% in 1960 to an estimated 10% in 2020. And the trend isn't improving.

Key to managing the disease for many of these people is taking insulin -- the hormone that helps regulate the amount of glucose in the blood. About 16% of patients with diabetes receive insulin, often in the form of two shots per day. Surprisingly, there aren't many producers of the drug.

Novo Nordisk (NYSE:NVO) and Eli Lilly (NYSE:LLY) are the global leaders in producing insulin, while rival Sanofi (NASDAQ:SNY) started its exit of the diabetes market in the past year. Unlike Sanofi and Lilly, which are broadly diversified pharmaceutical companies, Novo Nordisk has long been associated almost exclusively with treating patients who have diabetes. Although the company flies under the radar for many investors, its financial metrics tell the story of one of the best-managed businesses around. 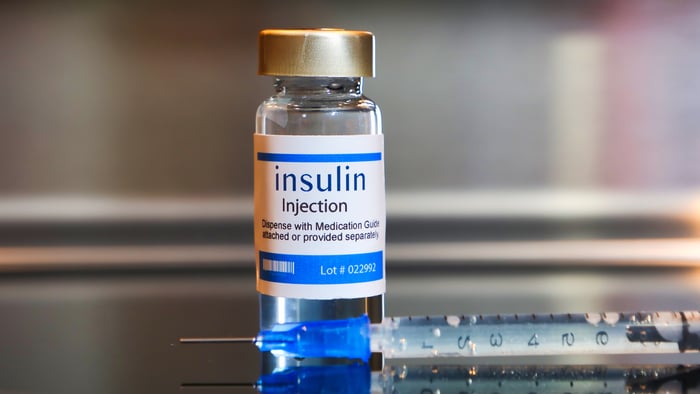 An undeniable leader in the diabetes market

Novo Nordisk has a 44.5% share of the global insulin market and 49.9% of the GLP-1 market. GLP-1s, or Glucagon-like peptide-1s, are drugs used for type 2 diabetes patients that both control blood sugar and have been shown to improve heart health, kidney function, and even aid weight loss. GLP-1s are new. In 2019, the company's drug Rybelsus was the first GLP-1 drug approved in the U.S. On top of the beneficial side effects, the most exciting characteristic of the drug is that it is administered orally.

The three companies that own the insulin market control more than 90% market share between them. That fact, and the lack of generic competition, has led to price hikes over the years that have infuriated critics while handsomely rewarding shareholders. Novo Nordisk shares have gained more than 2,500% since 2000 -- a true wealth-building investment. 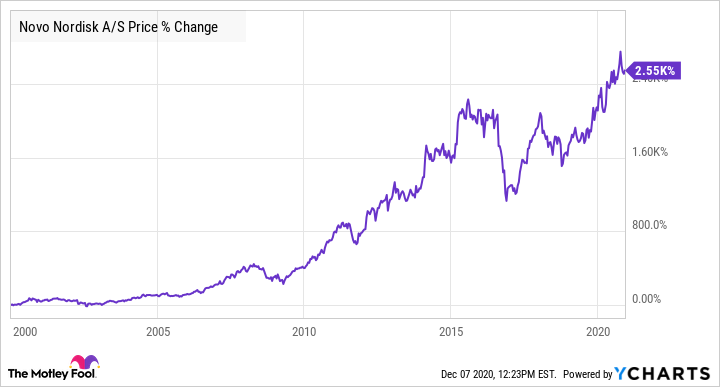 One of the most important metrics

Since the turn of the century, management has steadily increased its return on invested capital (ROIC) -- net income minus the dividend, divided by the total debt plus equity. This metric is crucial to assess how well management is allocating capital to profitable investments. In essence, it tells how profitable the investments are that the company is making. Novo Nordisk's ROIC has been between 65% and 82% over the past five years. For comparison, the next-closest pharmaceutical companies are Biogen and Roche Holdings at about 30%.

This consistent excellence is no doubt supported by a market for life-saving drugs dominated by three players. That said, the performance of both the business and the stock is something that is rarely found. The company did face headwinds in 2016 as sales of its insulin stalled, but the development of Rybelsus filled the gap and rekindled revenue growth. This transition from insulin to GLP-1 may mark the beginning of another decade or two of outperformance.

Why invest in a century-old drug maker?

With so much excitement about a messenger RNA (mRNA) COVID-19 vaccine from companies like BioNTech and Moderna, and the transformational potential of gene editing from CRISPR Therapeutics, Intellia Therapeutics, and Editas Medicines, it may seem boring to buy shares of a drugmaker that has lasted a hundred years focusing primarily on the same types of patients and making only incremental technological updates to its products. But let's remember what investing is about -- allocating your money to companies that can grow it over long periods of time. This is what excites me about Novo Nordisk.

The company's ROIC of greater than 60% means management is annually generating those returns on the capital -- debt plus equity -- that it employs. Not many savvy investors would turn up their noses at returns like that. The ability to shift from insulin to GPT-1 drugs as competition heated up also shows the company is not a one-drug wonder, desperately clinging to the profits of a single franchise. In fact, the June acquisition of Corvidia Therapeutics shows the company is expanding into diseases prevalent among diabetes patients, like kidney and cardiovascular disease. This is a smart -- and safe -- growth strategy.

Although there are risks with buying stock in any single company, Novo Nordisk is about as close as you can get to a "buy it and forget it" investment. The most likely threats would come from advances in mRNA or gene editing that would reprogram the body to better regulate blood sugar. Those advances, if they occur, are likely a generation away. For now, it's hard to find a company with a more rock-solid history of performance and dominant market position. For investors with a long time horizon, shares of Novo Nordisk are always a buy.