Please ensure Javascript is enabled for purposes of website accessibility
Free Article Join Over 1 Million Premium Members And Get More In-Depth Stock Guidance and Research
By Ryan Downie - Dec 15, 2020 at 8:04AM

These stocks have high upside that every investor should keep an eye on.

Initial public offerings (IPOs) are exciting events for investors because they offer whole new opportunities. IPOs are frequently newer businesses that have outgrown the private capital markets due to the rising popularity of their disruptive products and services. It is inherently risky to invest in companies with relatively limited operating histories that are beginning to challenge incumbent leaders that have more resources and stronger brands. Nonetheless, growth-phase disruptors can provide shareholders with monster returns as they ascend to industry-leading positions.

Palantir is a data analytics powerhouse

Palantir ( PLTR -0.95% ) was founded in 2003 by a group that includes PayPal's ( PYPL 0.51% ) Peter Thiel. Palantir is a leader in data analytics that rose to prominence for its role in counter-terrorism and anti-crime activities. The company quickly gained an excellent reputation thanks to its roster of talented employees, high-profile investors, and list of clients including government agencies and industry-leading enterprises. Palantir's notoriety made it one of the most anticipated IPOs in recent years. As early as 2014, the company was valued at $15 billion, placing it among the most valuable private technology businesses. 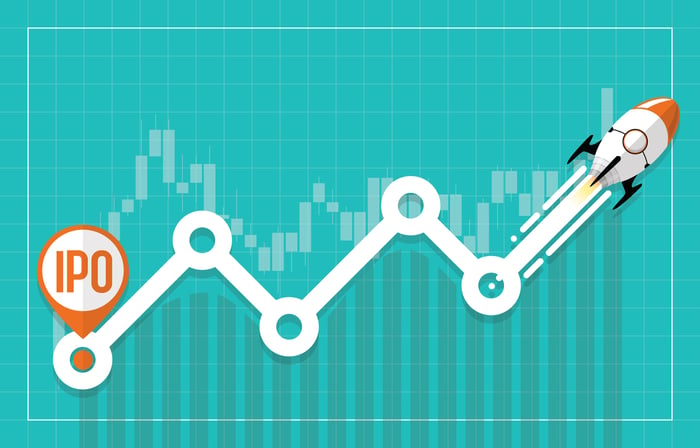 The stock went public in September 2020 through a direct listing rather than a traditional IPO. This means that existing shares were sold on the open market, rather than having new shares created and sold publicly. For individual investors, both are functionally similar events that lead to a new stock available for purchase on an exchange. Palantir shares began trading around $10, but the stock has since soared above $27 per share over a period during which the S&P 500 grew less than 10%.

Investors should be aware of the risks involved in buying shares that have recently tripled in price for a company that has never been profitable. Palantir's management is happy to forego short-term profits to invest in the marketing and corporate infrastructure necessary to continue growing rapidly, but this obviously requires shareholders to continue waiting for a return of capital. If Palantir continues winning major contracts and taking data analytics market share, which is a major growth industry, the company's ceiling is certainly well above its current $47 billion valuation. This stock is one to watch for growth investors.

Avantor ( AVTR -0.37% ) is a specialty chemicals company that serves customers from the biotech, pharmaceutical, medical, and advanced materials industries. The company was founded over 100 years ago, but has experienced numerous evolutions and changes of ownership, and rounded into its current form after acquiring two companies in 2017. Biopharmaceutical, diagnostics, and other life science industries are expected to grow due to aging populations in developed markets and expanding middle classes in emerging markets, and Avantor is in a great position to benefit from those trends as a supplier.

Avantor hit the public markets in May 2019 at $14 per share and has since outpaced the market on its way to $27. Much of the current buzz is around the company's role in supplying materials for COVID-19 vaccine research and development. Avantor might lack the spectacular upsides available in certain tech stocks with room to scale, but it currently trades at a modest forward P/E ratio of only 23, despite consensus estimates calling for annual earnings growth rates above 20% over the next few years. Avantor should be on your watch list as a recent IPO with a reasonable valuation and clear growth catalysts.

CrowdStrike is growing rapidly in cybersecurity

CrowdStrike Holdings ( CRWD -1.19% ) gained notoriety for its work in cyberattack response on behalf of Sony and the Democratic National Committee. The cybersecurity industry is gaining traction among investors because it is going to be an increasingly important part of business and everyday life. Remote work requires data protection, online sales channels need security to function properly and ensure safe transmission of funds, and the increasing number of connected devices requires tech solutions to safeguard privacy. Companies that lead the cybersecurity industry will have very strong growth catalysts over the foreseeable future.

CrowdStrike's June 2019 IPO was set at $34 by underwriters, but shares opened trading at $63.50 in a market hungry for exposure to leading cybersecurity names. After a brief rise, the stock endured seven difficult and volatile months until it began a rapid appreciation in Q2 of 2020. As of Dec. 10, shares have surpassed $178. Much of this appreciation was built on a bull market dragging almost all tech names along, but CrowdStrike's top-line growth continued to impress each earnings season.

Like Palantir, CrowdStrike is an unprofitable company with an aggressive valuation. The security company is focusing on growth rather than profits. Sales are nearly doubling every year, catching the attention of growth investors and Wall Street analysts, which is pulling more buyers into the market and driving the price higher. Buyers must pay for a forward P/E ratio above 500 and price-to-sales above 46, both of which are high, but this is a stock to watch with serious long-term upside.

What Nikola and CrowdStrike Stocks Tell Us About Insider Trades

The Secret to Measuring Value for Companies Like CrowdStrike or Apple

Are Robinhood Investors Missing Out on Popular Fidelity Stocks?