Beyond Meat (NASDAQ:BYND) and Darden Restaurants (NYSE:DRI) have both been affected by the COVID-19 pandemic this year. Beyond Meat's meteoric growth decelerated as the crisis throttled its orders from foodservice customers, while Darden's sales dropped sharply as its restaurants -- which include Olive Garden and Longhorn Steakhouse -- temporarily closed or operated with strict social distancing restrictions.

But both stocks remain up for the year. Beyond's stock soared more than 90%, while Darden's stock advanced about 7%. Will Beyond Meat continue to outperform Darden next year as the pandemic passes? Beyond Meat's "slowdown" wasn't too bad

In the first nine months of 2020, its revenue grew 53% year-over-year to $105.4 million. Its U.S. and international retail sales more than doubled as shoppers stocked up, but its foodservice sales slowed to a crawl in the U.S. and dropped by the double digits internationally.

In other words, shoppers still bought Beyond Meat products at supermarkets, but that growth was partly offset by the closures of restaurants and other on-premise businesses.

Its net loss narrowed last year, but widened year-over-year from $12 million to $27.7 million in the first nine months of 2020, mainly due to COVID-19 costs and higher stock-based compensation expenses. Its adjusted EBITDA, which excludes those expenses and other variable costs, rose 35% year-over-year to $21.3 million.

The bulls expect Beyond Meat's growth to accelerate next year as the pandemic passes, the foodservice business recovers, and the company expands its overseas business. The bears expect mainstream interest in plant-based foods to wane, and for competitors like Impossible Foods to split the niche market.

But for now, analysts don't think Beyond's growth story is over. They expect its revenue to rise 38% this year and 51% next year, with a narrower loss this year and a potential profit in 2021.

Darden's sales fell 8% in fiscal 2020, which ended on May 31, with an 11% decline in its blended same-restaurant sales. It mainly attributed that slowdown to restaurant closures throughout the COVID-19 crisis. 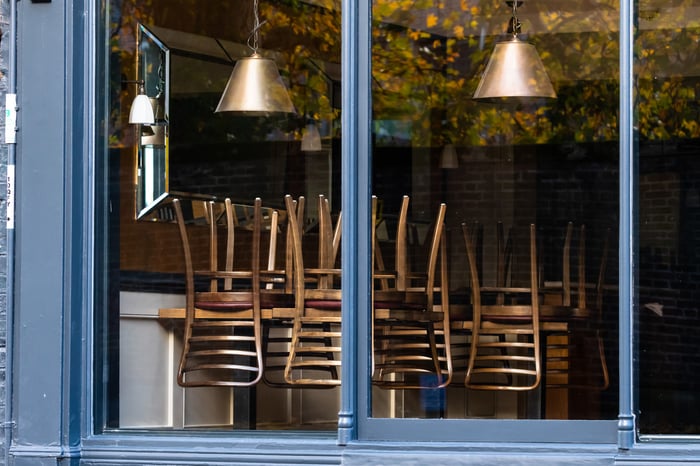 Sales at all of Darden's chains declined, but its core Olive Garden and Longhorn Steakhouse chains fared better than its fine dining (The Capital Grille and Eddie V's) and other chains (Cheddar's Scratch Kitchen, Yard House, Seasons 52, and Bahama Breeze). Its adjusted earnings, which mainly exclude impairments and pension settlement charges, dropped 46%.

Darden tried to soften the blow by transitioning to an off-premise model for pickups and deliveries, but it faced tough competition from other restaurants (including pizza and fast food chains) that were already optimized for takeaways and deliveries. Darden also struggled as the crisis throttled demand for its pricier meals.

Darden reopened over 90% of its dining rooms with limited capacity in late June. But its total sales still fell 24% year-over-year to $3.18 billion in the first half of fiscal 2021, with double-digit declines across all its chains. Its adjusted earnings from continuing operations declined 36%.

Only 75% of Darden's dining rooms remained open by mid-December, as a second wave of infections derailed its fragile recovery. Analysts expect its revenue to decline 9% this year, but for its earnings to rise 27% as its business recovers in the second half.

Next year, they expect its revenue and earnings to rise 24% and 58%, respectively, as the pandemic passes and leaves it with easy year-over-year comparisons. However, investors should be skeptical of those long-term forecasts, since no one is sure when the pandemic will actually end.

Beyond Meat still needs to prove that plant-based meat isn't a fad, but its robust retail sales throughout the crisis indicate there's still plenty of interest from mainstream consumers. As for the competition, there might be plenty of room for Beyond, Impossible, and other niche players to grow without trampling each other.

Darden trades at less than two times next year's sales and 18 times next year's earnings, and pays a decent forward dividend yield of 1.3%. Darden's stock looks cheap, but its core business will remain weak until the pandemic passes.

But even after the crisis ends, the economic aftershocks could make it tough for Darden to regain diners and meet Wall Street's rosy expectations. Darden isn't doomed yet, but I believe Beyond Meat will continue to outperform the aging restaurant giant for the foreseeable future.