Please ensure Javascript is enabled for purposes of website accessibility
Log In Help Join The Motley Fool
Free Article Join Over 1 Million Premium Members And Get More In-Depth Stock Guidance and Research
By Chris Neiger, Danny Vena, and Brian Withers - Jan 16, 2021 at 8:05AM

While bitcoin remains volatile, these companies have solid businesses that are growing fast.

Bitcoin has received a lot of attention from investors, especially over the past year, as the price of the cryptocurrency skyrocketed from around $8,000 at the beginning of 2020 to more than $40,000 as 2021 began.

But recently, the price of bitcoin dropped suddenly, and the slide has once again ignited the debate over whether bitcoin is a viable alternative payment system or just a speculative investment. Whatever side of that argument you may fall on, there are many great companies that are far better long-term investments than bitcoin.

Read on to find out why three Motley Fool contributors believe that Fiverr International (FVRR 6.93%), Square (SQ 7.00%), and PayPal Holdings (PYPL 0.37%) have the potential to beat bitcoin. 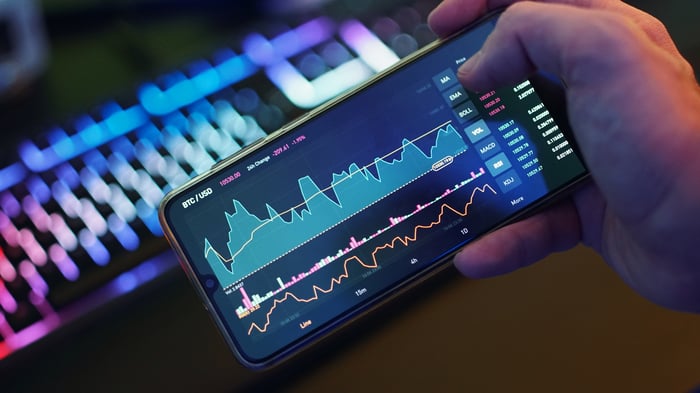 Danny Vena (Fiverr): One of the draws of bitcoin is no doubt the potential for a small investment to pay out big over time. Catching an investment early and riding it to untold riches has a certain appeal, but it rarely works out that way. That's why I believe investors should forget bitcoin and put their money to work in Fiverr International.

It seems that these days, everybody has a side hustle, a way to make a little money on the side. Then there are those who have broken away from the traditional workforce, opting instead for the freedom that comes from self-employment. The challenge for freelancers, however, is finding businesses with needs that match their skillsets. That's where Fiverr comes in.

The company provides one of the world's largest digital sales platforms that helps connect freelancers with these businesses, and does so for as little as $5 -- the reason for its moniker. Sellers (freelancers) post their talents and services (called gigs) in a growing list of 300 categories, allowing for businesses to shop their services. Fiverr acts as the escrow, holding the finds to ensure that both parties are satisfied, charging a 20% commission for its services as matchmaker. The pandemic accelerated the pace of the digital transformation, playing right to Fiverr's strengths.

Its position as gatekeeper and toll collector has been extremely lucrative for Fiverr. The company has generated revenue that's accelerated in each of previous four quarters. In the third quarter, revenue jumped 88% year over year, while Fiverr's net loss improved 95%, knocking on the door of profitability much sooner than investors had anticipated.

Activity on the platform is helping drive its financial results. Active buyers increased 37%, but perhaps more importantly, existing buyers are spending more. In fact, the average spend per buyer has climbed relentlessly, notching gains every single year all the way back to 2012, and has more than tripled during that time frame.

Future growth looks brighter than ever, as each cohort of buyers increases the company's foundation, with many becoming repeat users. In 2019, 58% of revenue came from existing buyers, with the remaining 42% coming from new users. The company is also courting enterprise clients with its Fiverr Business platform, helping match sellers with the big businesses that need their services. This move upmarket will help boost average spending per buyer even further.

The gig economy will only grow from here. Fiverr's management pegs the company's total addressable market at $115 billion and counting. With trailing-12-month revenue of just $100 million, Fiverr has plenty of worlds left to conquer.

Brian Withers (Square): If you are interested in profiting from the bitcoin trend, why not buy into the company that sold $1.6 billion of the cryptocurrency last quarter? Square and its popular Cash App allow users to buy and sell bitcoin, but this fintech has so much more to offer.

Square has two ecosystems: its original business centered around serving sellers, and Cash App, focused on serving individuals. The company started by selling a small square-shaped device that plugs into a mobile device to help sellers and small businesses collect payments. This ecosystem has expanded to support all aspects of running a small business, including payroll, customer engagement, and even setting up e-commerce websites. Last quarter, its seller ecosystem posted $965 million in revenue and $409 million in gross profit, up 5% and 12% year over year, respectively. The coronavirus has hampered growth in the last several quarters, but as vaccines get rolled out globally, small business activity should recover and this ecosystem will return to strong growth.

The Cash App ecosystem has been an incredible growth driver this year. Not only have gross profit gains been in the triple digits year over year, but they have accelerated over the last three quarters, reaching a jaw-dropping 212% growth last quarter. Cash App is popular because of its ability to buy bitcoin, but customers love many of its other features, too. Over 2.5 million customers have used Cash App to buy and sell stocks, and users carried more than $1.8 billion in cash in their accounts, up 180% year over year.

But this fintech is just getting started. With its seller ecosystem's addressable market of more than $100 billion annually and the Cash App market exceeding $60 billion, it's captured less than 3% and 2% of each market, respectively. There's a lot to like about this fintech: accelerating Cash App growth, a seller ecosystem that's set to bounce back when the economy picks up, and a popular bitcoin trading platform. Why just settle for buying bitcoin when you can buy into shares of this tech company with two strong ecosystems serving two massive addressable markets?

A better way to invest in digital payments

Chris Neiger (PayPal): If you're drawn to bitcoin because of its potential to disrupt traditional ways of buying and selling goods, then you may want to consider PayPal's bet on digital payments.

PayPal has long been a household name for online payments, but the company has continued to grow far beyond its original payment platform. For example, the company's Venmo app, which allows peer-to-peer payments, has become an important service for the company over the past few years.

Venmo can now be used to pay for goods and services at physical locations, and, if you're still interested in bitcoin, can be used to buy and sell cryptocurrencies as well.

Aside from Venmo's potential in digital payments, PayPal also recently partnered with CVS Health and Nike to allow PayPal users to make contactless payments with QR codes at physical stores. This move by PayPal blends digital payments with physical locations and is helping the company continue to expand how it generates sales through its platform.

In the most recent quarter, PayPal added an impressive 15.2 million net new active accounts, sales jumped 25%, and the company's earnings skyrocketed 121% from the year-ago quarter. And the company's management estimates that the company's full-year 2020 generally accepted accounting principles (GAAP) earnings will be up 38% year over over.

The U.S. digital payments market will reach an estimated $2 trillion by 2025, and PayPal is already a clear leader in this space. For investors who are looking for a great investment in digital payments, PayPal's customer growth, solid earnings, and expansion into new services make it a more solid bet than guessing whether the price of bitcoin will rise or fall.