Please ensure Javascript is enabled for purposes of website accessibility
Log In Help Join The Motley Fool
Free Article Join Over 1 Million Premium Members And Get More In-Depth Stock Guidance and Research
By Dan Caplinger - Jan 20, 2021 at 11:59AM

The stock market continued to build momentum on Wednesday, sending several stock market benchmarks to levels that would represent all-time closing highs. Many market participants' eyes were on Washington, where the pandemic-subdued Inauguration Day event is scheduled for midday. As of just before 11 a.m. EST, the Dow Jones Industrial Average (^DJI -0.79%) was up 217 points to 31,148, just shy of its highest closing mark. Reaching their highest levels ever, the S&P 500 (^GSPC -1.62%) rose 43 points to 3,841, and the Nasdaq Composite (^IXIC -2.76%) powered higher by 224 points to 13,421.

The stock market has gotten a lot of support from smaller companies lately, but on Wednesday, Netflix (NFLX -3.46%) took the spotlight with its reading on how the streaming-video giant fared to end 2020. Meanwhile, investors in Chinese internet-leader Alibaba Group Holding (BABA -4.08%) were reassured by something that would typically have seemed completely ordinary in other contexts.

Shares of Netflix soared more than 14% on Wednesday morning. The company released its fourth-quarter earnings report late Tuesday afternoon, and investors focused on the numbers they liked the most.

The best news Netflix gave was that it signed up 8.51 million new memberships during the quarter. That brought the total to 203.66 million, and Netflix projected that it will see another 6 million new members in the first quarter of 2021. 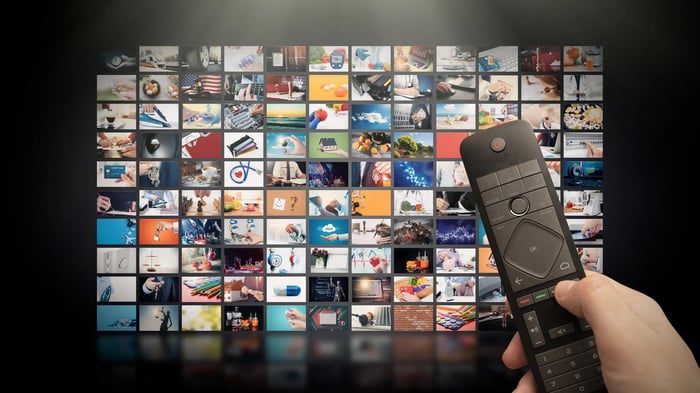 Elsewhere, figures were more mixed. Revenue jumped 21.5% to $6.64 billion. However, net income was down 8% to $542 million, which was consistent with some of the predictions that Netflix had made recently. With the expenses necessary to produce and deliver top-quality content on the rise, maintaining bottom-line growth will prove increasingly difficult for Netflix, at least in the near future.

Interestingly, though, Netflix raised the idea of taking some of its cash flow and returning it to shareholders through stock buybacks. That indicates the confidence that co-CEOs Reed Hastings and Ted Sarandos have in being able to produce enough capital to finance future production and content acquisition while still rewarding investors. After a year that brought 37 million new paid memberships into the fold, that's not an unreasonable hope for the Netflix executives to have.

Meanwhile, shares of Alibaba Group Holding were higher by 5%. All it took for shareholders to feel better about the company was to see co-founder Jack Ma back in action.

Investors had grown increasingly worried that something might have happened to Ma, as he hadn't been seen in public in three months. Concerns about potential friction between the Alibaba co-founder and the Chinese government had led some to start suspecting the worst.

Yet a video of Ma addressing a ceremony honoring teachers reassured investors that nothing sinister had happened. A state-affiliated media site carried footage of Ma's appearance.

What's uncertain is whether tensions between Ma and Chinese officials have truly gone away. Ma has been highly critical of Chinese regulators, complaining that a harsh and restrictive environment has held back innovation. That tension prompted the delay of the initial public offering of Alibaba fintech-unit Ant Group, in which Ma also holds a considerable stake. Nevertheless, at least for now, Alibaba investors are breathing a sigh of relief.