Bumble, the online dating company led by Tinder co-founder Whitney Wolfe Herd, recently filed its IPO paperwork. I recently highlighted Bumble as one of my top IPO picks for 2021, and a deeper dive into its prospectus reveals five clear reasons to be bullish.

1. A female-oriented platform that goes beyond dating

Bumble's namesake app is similar to Match's (MTCH 6.81%) Tinder, but it only lets women make the first move. Women have made 1.7 billion first moves since its launch in 2014, and it hosts approximately 30% more female users than male users.

Bumble has also expanded its platform beyond dating with Bumble BFF, a matching service for platonic friendships, and Bumble Bizz, a mode for professional connections. Those features could further differentiate Bumble from Tinder and transform it into a diversified female-oriented social network. 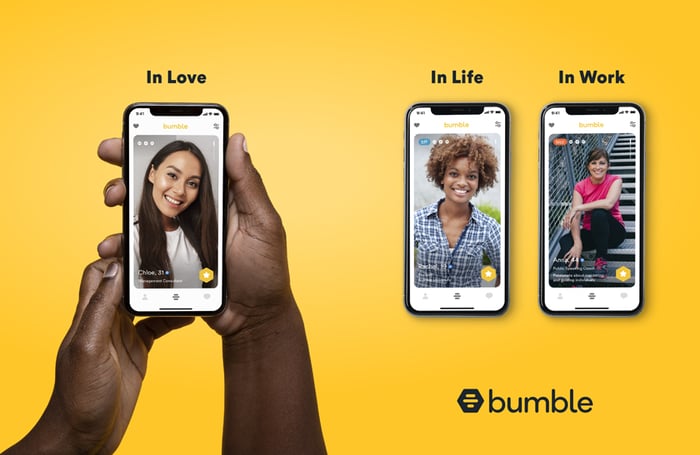 2. It owns another major dating platform

Badoo is popular in Europe and Latin America, while Bumble is more widely used in the U.S., U.K., Canada, and Australia. Together the two apps are present in more than 150 countries. Bumble is currently one of the top five highest-grossing iOS lifestyle apps across 30 countries, according to Sensor Tower, while Badoo is a top-five app in 98 countries.

Bumble ended the third quarter of 2020 with 42.1 million monthly active users (MAUs), including 12.3 MAUs on Bumble and 28.4 million MAUs on Badoo. It didn't disclose its MAU growth rates, but it did reveal its year-over-year growth in paid users, who pay for perks such as unlimited swipes, overseas swipes, and the ability to see who likes you right away.

Bumble's revenue still rose 14% year over year during those nine months, but Badoo's revenue fell 9%. Its average revenue per paying user (ARPPU) also declined across both apps. That slowdown was likely caused by the same pandemic-related headwinds that throttled Tinder's growth throughout 2020, so Bumble's growth could accelerate after the crisis ends.

5. Plenty of room to grow

Bumble's growth decelerated during the pandemic, but it believes its namesake app -- which generates roughly twice as much revenue per paid user as Badoo -- has only reached a "fraction of the total addressable market" in North America.

It also notes it's still in the "early stages" of expanding Bumble globally, and that successful tests in new markets across Europe, Asia, and Latin America bode well for its international growth. The company generated 47% of its total sales from outside of North America last year.

If Bumble can replicate the female-friendly strategies that made it Tinder's top rival in the U.S., U.K., Canada, and Australia in other markets, it could gain millions of new users. Its early-mover advantage will also give it an edge against latecomers like Facebook (META 7.19%), which rolled out its own dating features over the past year.

A promising IPO ... at the right price

Bumble looks like a promising alternative for investors who missed out on Match's multibagger gains over the past five years. However, investors should wait to see if the company offers its shares at a reasonable price.

Bloomberg claims Bumble could seek a valuation of $6 billion to $8 billion, which would value the company at just over 20 times last year's sales. That would be an acceptable price, but anything higher might be too speculative.