A lot of stocks are flying these days, but some of them haven't earned their wings.

If you thought 2020 was a tough one to explain, with the market rising despite a pandemic and global recession, good luck trying to figure out 2021. It's been a wild trading year so far, and we're still only in January.

Some of the market gains are warranted, but I'm not sure if a few of the market darlings will be able to keep the good times going by year-end. I see Blink Charging (BLNK -4.53%), GameStop (GME -3.56%), Tesla Motors, (TSLA -6.42%), and Airbnb (ABNB -1.42%) as high-flying stocks to avoid. They may continue soaring in the coming days, but it wouldn't surprise me if all four of them were trading lower -- and in some cases markedly lower -- a year from now. 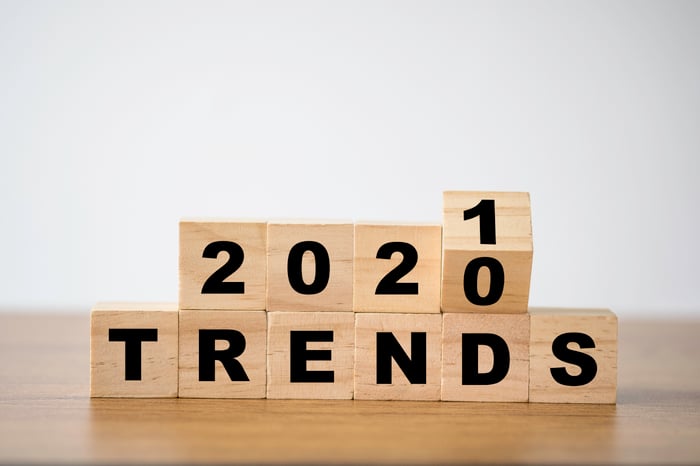 Some will argue that Blink Charging has a long runway with the boom in electric vehicles, but why will Blink Charging be a leader in the future when it's meandering in the present? Tesla owners are blanketed by the network of Supercharger stations, and competition will heat up in major cities for third-party kiosks that may never turn a profit given the pricing dynamics and overhead.

I'm throwing in the towel on near-term prognostications when it comes to GameStop. It's clear that traders are playing it right now like a brand new video game. They will trade it in for something shinier eventually, but realizing that the event will happen is the safer call than timing when the bottom will fall out of the monster rally.

GameStop may continue to trade higher in the coming days and weeks, but this won't be a $10 billion company a year from now. Its operating profit has fallen sharply for five consecutive fiscal years. Sales are just a little more than half of what they were when they peaked eight years ago. Traders have wrestled away the game controller right now, and they will have their fun with the stock. The fundamentals aren't changing. Gamers are buying low-margin consoles and accessories at GameStop, but then they're turning to digital content with rare purchases of physical games. The stock may continue trading higher in a few days or even weeks. In the long run, the actual business matters.

GameStop's business will be weaker a year from now, and there's no doubt that Telsa Motors will be stronger. I like everything about Tesla Motors -- except the price of its stock. Tesla's meteoric ascent finds it as the fifth most valuable company by market cap right now. It's a tough sticker price to justify.

Tesla isn't going to relinquish its pole position in the ascending electric vehicle market. It will keep making its mark, and the revolution is real. The $837 billion market cap is what worries me here. My next car should be a Tesla, but I can't say the same about my next investment.

One of last year's hottest IPO stocks was Airbnb. The hospitality industry disruptor bears watching. It's shaking up the lodging space and arming owners of extra rooms or vacation properties with a new way to profit from their vacancies. However, when Airbnb hit the market at $68 and then just kept going, it should have given any rational investor a reason to pause.

The stock has now nearly tripled, and it's hard to justify Airbnb as a $114 billion company today. Revenue has declined 32% through the first three quarters of 2020, and while this is understandable given the travel-snuffing pandemic, it's not as if Airbnb wasn't already slowing before the COVID-19 crisis. Revenue went growing 43% in 2018 to 32% in 2019.

How confident are you that Airbnb will be back at 2019 levels anytime soon? The vaccination process has been slow to get going, and countries are clamping down with more travel restrictions instead of less in light of the new, more contagious strains that are emerging. When the rubble does clear it may take a couple of years for leisure travel to return to normal, and we may never see corporate travel come back, given the accelerated adoption of digital communication tools over the past year. Airbnb is a great company with a big lead in a promising market, but like Tesla it will take time to grow into its lofty valuation.