There were hopes that could change with Anthem reporting its fourth-quarter results before the market opened on Wednesday. However, the healthcare stock slid nearly 7% in early trading after announcing its results. Here are the highlights from Anthem's Q4 update. 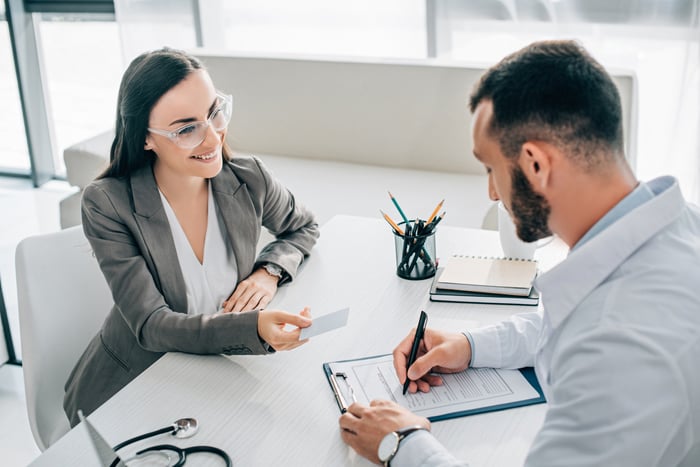 Anthem reported revenue in the fourth quarter of $31.8 billion. This reflected a 16% increase from the prior-year period revenue total of $27.4 billion. It also topped the Wall Street consensus estimate of $30.78 billion.

The company announced net income of $551 million, or $2.19 per share, in the fourth quarter based on generally accepted accounting principles (GAAP). This result was a sharp decline from the same quarter of 2019, when Anthem posted GAAP earnings of $934 million, or $3.62 per share.

On a non-GAAP (adjusted) basis, Anthem's net income in the fourth quarter came in at $637 million, or $2.54 per share. This reflected a significant decline from the prior-year period adjusted net income of $1 billion, or $3.88 per share. It beat the estimate of adjusted earnings of $2.52 per share for analysts surveyed by Refinitiv. However, Anthem's adjusted earnings per share were below the average estimate of $2.57 of analysts surveyed by Zacks. That's why the stock fell on Wednesday.

Anthem's solid revenue growth was driven partially by increased membership. The company reported medical enrollment of around 42.9 million members as of the end of 2020, up 4.7% year over year. This growth was especially fueled by expansion of the company's Medicare Advantage and Medicaid programs.

The company's fastest-growing business, though, was its IngenioRx pharmacy benefits management (PBM) unit. IngenioRx revenue skyrocketed 81.4% to nearly $5.9 billion in the fourth quarter.

Anthem's worsening bottom line stemmed in large part from the COVID-19 pandemic. Although the company's benefit-expense ratio (its cost of insurance coverage divided by premium revenue) fell from the prior-year period, the pandemic caused Anthem to spend a lot more on testing and treatment of its members.

Anthem expects that operating revenue for full-year 2021 will be around $135.1 billion. This includes premium revenue that's anticipated to be between $114.5 billion and $115.5 billion. Wall Street analysts project 2021 revenue of $120 billion.

A couple of wild cards could affect Anthem's performance. One is the COVID-19 pandemic. Another is the potential for business development deals. Anthem's big rival, UnitedHealth Group, recently announced plans to acquire Change Healthcare for $13 billion. The deal builds UnitedHealth Group's data analytics business, an area where Anthem doesn't compete at this point. However, it wouldn't be surprising for Anthem to make some deals of its own over the next year.