The company's latest quarterly report shows why it's on track to become an even better holding for dividend investors.

East Coast and Midwestern railroad giant Norfolk Southern (NSC 1.76%) shared its fourth-quarter and full-year earnings scorecard with investors Wednesday. The company's results mirrored those of its rail freight peers: Revenue declined due to lower volume courtesy of COVID-19, while operating efficiency increased thanks to the company's implementation of the principles of precision scheduled railroading, or PSR.

Norfolk Southern also announced it was increasing its quarterly dividend by 5% to $0.99 a share. The next payout will be the railroad's 154th consecutive quarterly dividend. Management made one additional announcement regarding the dividend that points to an improved total return potential for income investors -- and which we'll discuss following a review of the quarterly numbers. 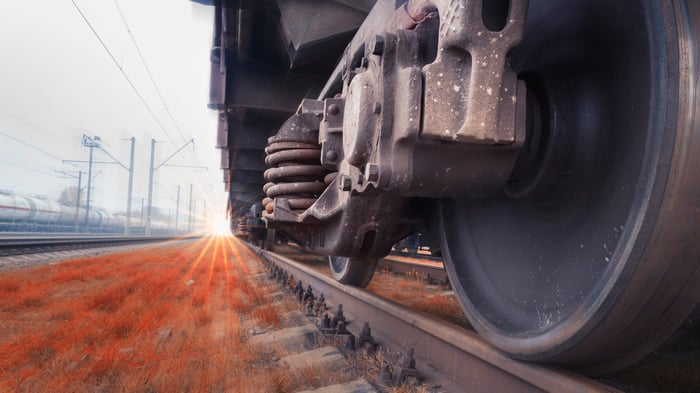 A continuation of muted pandemic performance

Norfolk Southern's railway operating revenue slipped by 4% year over year in Q4 to $2.6 billion. Management attributed that to a 1% drop in volume, as well as decreased fuel surcharge revenue and an unfavorable product mix. Operating expenses diminished by 8% however, primarily led by lower fuel costs and a dip in compensation and benefits expenses.

Easing fuel costs and better control of overhead helped Norfolk Southern eke out a small advance on the bottom line: Net income increased from the prior-year quarter by $5 million, or less than 1%, to $671 million. Diluted earnings per share rose by 3.5% to $2.64, helped by a reduction in share count due to the company's share repurchases over the last 12 months.

Norfolk Southern continued to exhibit tangible progress on its PSR initiatives. Operating ratio (a measure of rail productivity determined by dividing total operating expenses by total revenue) was 61.8% -- a new quarterly record for the company.

Its efficiency improvements are manifesting in better cash flow. While net income declined by 26% in 2020 to $2 billion as rail volumes deteriorated, cash generated from operations fell by just 7%, to $3.6 billion. Due to an effort to streamline capital investment as part of its PSR initiative, Norfolk Southern allocated less money to capital expenditures in 2020 than in 2019. Thus, free cash flow (operating cash flow minus capital expenditures) improved to a company record of $2.1 billion.

Norfolk Southern used part of its generous cash flow to repurchase $1.5 billion worth of stock in 2020, and also paid out $960 million in dividends to shareholders. With the 5% increase the company announced Wednesday, its dividend now yields 1.6% on an annualized basis.

As the rail giant's efficiency and cash generation both improve, management is eyeing further dividend hikes. It announced Wednesday that it's increasing its long-term payout ratio target from 33% to a range of 35%-40% of net income.

The implications for shareholders may appear minor at first. What's the great difference between paying out one-third of net income, and say, two-fifths (i.e. 40%) in the form of dividends? For investors looking at buying Norfolk Southern stock to hold for the long term, a better payout ratio will have a leveraging effect on what's likely to be substantially higher net income over the next few years, due to the company's successes in implementing PSR practices.

Despite anemic revenue, Norfolk Southern's earnings during the pandemic have nearly equaled in net income from 2019 thanks to those efficiency improvements. Given the projections for robust volume growth as the economy recovers, we can expect rising net income in the coming years as the company runs higher traffic through a more efficient operating model. Thus, the company will be starting with bigger pots of earnings and distributing larger fractions of them to shareholders, which will result in handsome growth in quarterly dividend checks.

I wouldn't be surprised to see a meaningful dividend hike late this year. On the company's earnings conference call, CEO James Squires shared the transportation stalwart's current-year outlook, which anticipates that growth in merchandise and intermodal volumes will offset a decline in coal and other commodity shipments in the next several months. Squires disclosed that the company is modeling for a revenue increase of 9% in 2021. A return to top-line growth bodes well for Norfolk Southern's total return equation in 2021, and far beyond.