Please ensure Javascript is enabled for purposes of website accessibility
Log In Help Join The Motley Fool
Free Article Join Over 1 Million Premium Members And Get More In-Depth Stock Guidance and Research
By Adam Levine-Weinberg - Feb 2, 2021 at 9:35AM

Most investors probably haven't heard of Macerich (MAC 0.79%): at least not until recently. However, the owner of top-tier malls gained wider recognition last month as one of several heavily shorted stocks touted on the WallStreetBets Reddit board.

As of mid-January, bearish investors had shorted more than half of Macerich's shares. This made the stock a short-squeeze candidate. With lots of traders looking for the next GameStop (and short-sellers eager to avoid getting caught in the next GameStop), the possibility of a short squeeze became a self-fulfilling prophecy. Macerich stock more than doubled in the span of two weeks, touching a 52-week high of $25.99 last week.

Yet it didn't take long for reality to sink in again. Last week, Macerich's biggest investor sold all of its shares in the mall operator. And on Monday, the company released a weak preliminary earnings report for the fourth quarter. As a result, Macerich stock has surrendered most of its January gains, ending the day at $14.01 on Monday. 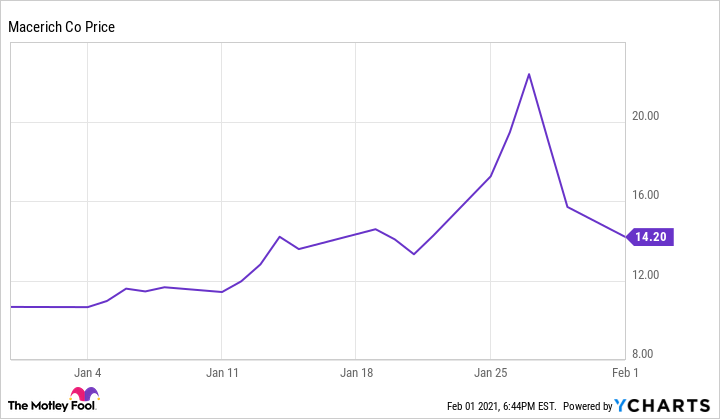 Macerich stock has attracted attention on the WallStreetBets forum in recent weeks, causing the stock to surge. The buying frenzy peaked last Wednesday, when the stock quickly shot up by more than 30% in morning trading.

The Ontario Teachers' Pension Plan capitalized on the Macerich stock short squeeze to exit its position in the company. The pension fund disclosed that it sold all of the nearly 25 million Macerich shares it held on Wednesday, fetching an average price of just over $20. In a single day, Ontario Teachers' went from owning more than 15% of the company to having no position.

The pension fund had been a major investor in Macerich for more than two decades. It continues to own joint-venture stakes in some of the REIT's malls. However, Ontario Teachers' Pension Plan now wants to diversify its global real estate holdings. Given how quickly the short squeeze has faded, the fund's decision to act quickly looks wise -- at least for now.

On Monday, Macerich stock logged a double-digit decline for the third consecutive day. For one thing, the WallStreetBets-fueled momentum for heavily shorted stocks has started to reverse. Moreover, Macerich released preliminary Q4 earnings results on Monday morning, highlighting how it will take time for its business to recover from the COVID-19 pandemic.

Macerich had some good news to report. Most notably, the company collected 91% of billed rent last quarter, up from 89% in the third quarter. Additionally, its average rent per square foot increased 1.3% year over year to $61.87. Macerich also extended some debt maturities, improving its near-term liquidity.

That said, Macerich estimates that same-center net operating income (NOI) plunged 33% last quarter, excluding lease termination income. This caused adjusted funds from operations (FFO) to fall by more than half to $0.45 per share. Both metrics deteriorated modestly compared to the third quarter. Furthermore, analysts had expected Q4 adjusted FFO per share of $0.57, on average.

Temporary factors like rent relief for hard-hit tenants, bad debt expense, and lower common area and ancillary revenue all contributed to Macerich's weak results last quarter. However, Macerich also faces some longer-term challenges. It ended 2020 with an occupancy rate of 89.7%, compared to 94% at the end of 2019 and 95.4% at the end of 2018. Backfilling vacancies will take time, but it's the only way for Macerich to rebuild NOI and FFO to pre-pandemic levels.

Macerich stock's rapid rise and fall over the past few weeks highlights the danger of trying to profit from a short squeeze. Short sellers often pile into particular stocks because the underlying companies face serious challenges. If speculators subsequently buy the stock hoping for a short squeeze, technical factors may well cause the share price to surge, but the gains often don't last long.

As it happens, Macerich is a much better business than most other short-squeeze plays. Macerich owns a portfolio of highly productive malls that sit on valuable real estate in major cities and their suburbs. It may take a couple of years to boost occupancy and traffic to pre-pandemic levels, but most of the REIT's malls should recover fully. Macerich also has numerous opportunities to "densify" its properties by adding hotels, apartments, or other mixed-use buildings on underutilized parking lots at its malls.

Looking ahead, low interest rates could make Macerich's malls even more valuable than they were before the pandemic, due to demand from yield-starved investors. That could eventually support a stock price far above last week's high. Investors who buy Macerich stock and hold it patiently for many years are far more likely to build wealth than traders trying to profit from an ephemeral short squeeze.