The commercial real estate broker just reported its latest results, and here's what we learned.

The stock market was modestly higher on Thursday, with all three major indices up by less than 1% as of 1:50 p.m. EST. Commercial real estate finance company Walker & Dunlop (WD 3.78%) was a big standout, with shares climbing by 13%.

The short explanation is that Walker & Dunlop announced fourth-quarter and 2020 full-year earnings results before the market opened today, and investors are clearly impressed. 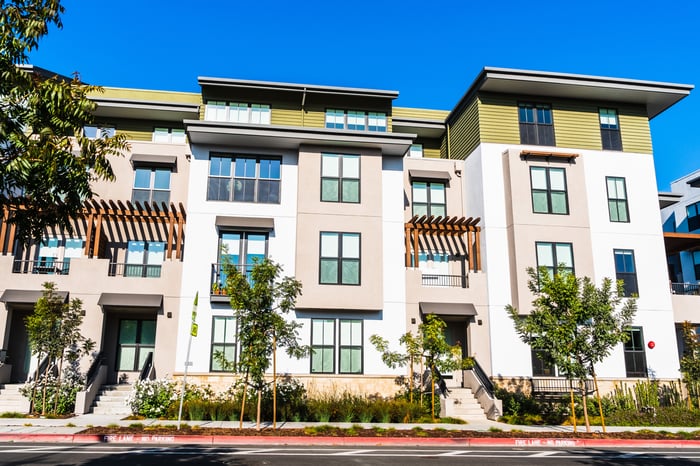 For starters, revenue climbed by 33% in 2020 to $1.08 billion, handily exceeding the $1 billion goal the company set in its 2015 five-year plan. Debt-financing volume shattered the company's $30 billion 2020 expectation as well, coming in at nearly $35 billion and growing 32% over 2019. And the company's mortgage-servicing portfolio is now a massive $107 billion in size, more than doubling in the past five years.

In Q4, Walker & Dunlop earned $2.59 per share, which is a staggering 93% year-over-year growth rate. Along with the earnings release, the company also announced a 39% increase in its quarterly dividend as well as a new $75 million share repurchase plan (up from $50 million in 2020).

Walker & Dunlop met most of its five-year goals set in 2015 despite the COVID-19 pandemic. The company recently released its new "Drive to '25" five-year plan, and it sets the ambitious goals of becoming the number one multifamily lender in the U.S., adding $60 billion in loans to the servicing portfolio, establishing investment banking capabilities, and more.

Walker & Dunlop has been an excellent investment over the past five years, but if the company can successfully meet its 2025 goals, there could be much more upside to come.