Please ensure Javascript is enabled for purposes of website accessibility
Log In Help Join The Motley Fool
Free Article Join Over 1 Million Premium Members And Get More In-Depth Stock Guidance and Research
By Manali Bhade - Feb 5, 2021 at 6:20AM

One robotic surgery company and one cybersecurity specialist are bound to impress in the long run.

TransEnterix (ASXC -8.29%) and CrowdStrike (CRWD -6.53%) have gained over 139% and 251%, respectively, in the last twelve months. However, their share price trajectories could not be more different. While TransEnterix lost almost 60% of its market value in 2020 and rose over 423% since Jan. 1, CrowdStrike has been gradually rising throughout 2020 and so far into 2021.

TransEnterix is focused on reducing surgical variability and improving patient outcomes for laparoscopic procedures with the help of robotic surgery, while CrowdStrike is introducing many meaningful innovations in the ever-evolving cybersecurity space. Thanks to these industrywide trends, retail investors stand to gain some handsome returns from investing in these stocks in the coming years. 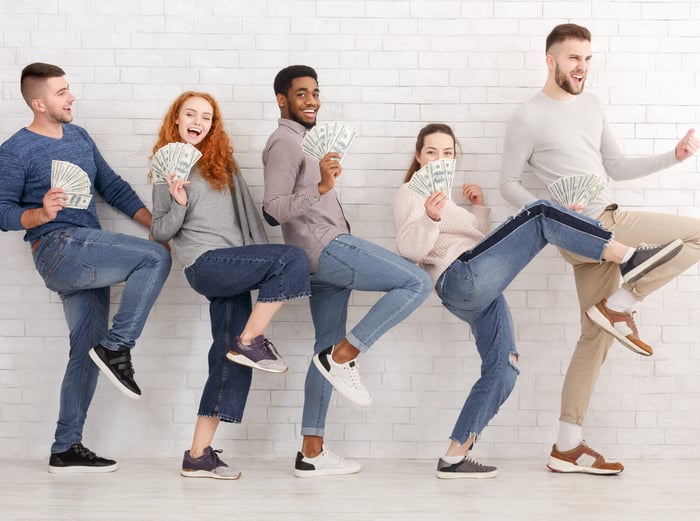 TransEnterix is primarily known for its Senhance Surgical Robotic System, which is the first and only U.S. Food and Drug Administration (FDA)-approved digital laparoscopy platform. To date, more than 100 surgeons have used the Senhance to perform over 4,000 abdominal surgeries across the world. Senhance is a very reliable and well-tested robotic surgery product; minimal adverse events have been reported by doctors and patients.

Currently, surgeons perform 6 million laparoscopic surgeries annually in the U.S. and Europe. However, penetration of robotics in this field is minimal. TransEnterix is eyeing this rapidly expanding greenfield opportunity, which can become even bigger in the post-pandemic world. As risks of COVID-19 infection mount, robotic surgery can help limit human interaction and offer increased safety both for the surgeon and the patient. There is also limited competition to Senhance from other specialized robotic systems in the laparoscopic surgery space.

Although the COVID-19 pandemic has affected case volumes of Senhance-assisted laparoscopic procedures in 2020, the volumes are set to improve in 2021. TransEnterix has received FDA clearance and CE Mark approval for its Intelligent Surgical Unit (ISU), a machine vision system used in conjunction with Senhance. The CE approval allows the use of the Senhance System in Europe. The ISU technology adds artificial intelligence and robotic vision capabilities to the Senhance system, reducing the laparoscopic surgeon's learning curve and the potential for human mistakes. The company is also uniquely positioned to capture a significant chunk of the pediatric laparoscopic procedure market, thanks to having smaller instrumentation as compared to other robotic surgery players.

TransEnterix has also managed to maintain a debt-free balance sheet. The company's pro-forma cash on Jan. 14 was $84.1 million, which includes proceeds from registered direct offering, warrant exercises, and share sales. TransEnterix has projected its cash runway to last until the end of 2022.

There are also many regulatory catalysts anticipated in the first half of 2020 that can further push up share prices. TransEnterix is expecting the FDA's clearance for use of the Senhance system in general surgery indication. The company also plans to file applications seeking FDA approval for its next-generation ISU technology and articulating instruments.

TransEnterix strategically shifted its focus to developing and educating the market to push adoption of the Senhance system instead of near-term revenue opportunities in 2020. Hence, at the cost of a few hardships in 2020, the company has been building a solid platform for future growth. Investors should not ignore risks stemming from the company's reliance on a single product as well as those associated with effective commercialization and potential competition. However, TransEnterix is essentially an early stage commercial company, where future growth prospects are a bigger priority than current financials. Hence, considering the market opportunity and the company's technological competence, TransEnterix seems to offer a favorable risk-reward proposition for healthcare investors in 2021.

CrowdStrike's Falcon platform, which encompasses 16 modules, has emerged as best-in-class in protecting workloads (anything associated with networking, storage, and computing) across a range of devices such as laptops, desktops, Internet of Things devices, servers, and virtual machines. These endpoints can be either on-premise or in the cloud environment.

CrowdStrike also collects security-related data from all these endpoints. The company's Threat Graph Breach Prevention Engine uses artificial intelligence (AI) to analyze the data, and the resulting insights are used to develop more intelligent security solutions for existing and new use cases. Recently, the company entered the identity protection market with its acquisition of Preempt Security. CrowdStrike estimates its 2021 addressable market to be $32.4 billion, significantly up from its estimated $24.6 billion market in 2019.

Both macroeconomic and company-specific trends are in favor of CrowdStrike. The company has benefited from a huge spike in demand for cybersecurity solutions, driven by a push toward digital transformation and remote working as a result of the pandemic. The mission-critical nature of security was again reiterated after the recent "Sunburst hack," a massive cyber-attack against several U.S. government organizations and corporations mainly due to a cybersecurity lapse by a major network monitoring company, SolarWinds . This heightened threat environment has brought increased attention to the company's professional services business, which focuses on incident response management, and this service engagement is leading to new platform deals.

CrowdStrike differentiates itself from legacy security providers such as Broadcom's (AVGO) Symantec and McAfee (MCFE) on three key factors -- single console, cloud-native platform, and Threat Graph capabilities. The company offers a solution built specifically for the cloud, unlike other legacy players that have been improving on the systems built originally only for on-premise use. CrowdStrike customers can manage all security-related activities using a single console, which dramatically reduces complexity as compared to the older way of working with multiple vendors and reconciling data from multiple consoles. Threat Graph collects all security data in one place, allowing the company to holistically understand and then protect the customer's environment.

CrowdStrike has guided for fiscal 2021 revenues in the range of $855 million to $860 million, implying a potential year-over-year growth of 78% to 79%. But most importantly, the company is expecting to become modestly profitable in 2021.

CrowdStrike is currently trading at lofty valuation multiples, with a forward price-to-earnings (P/E) ratio close to 600 and price-to-sales (P/S) above 61. However, considering the solid industry growth trends and efficient operations, CrowdStrike could still prove to be an impressive long-term pick for retail investors, even at these expensive levels.