Please ensure Javascript is enabled for purposes of website accessibility
Log In Help Join The Motley Fool
Free Article Join Over 1 Million Premium Members And Get More In-Depth Stock Guidance and Research
By Jason Hawthorne - Feb 6, 2021 at 7:10AM

The company is disrupting a new industry with an old strategy.

When Amazon (AMZN -7.16%) launched its new online pharmacy, the stocks of industry stalwarts like CVS Health (CVS -5.39%) and Walgreens Boots Alliance (WBA -8.39%) fell precipitously. It wasn't the first major announcement Amazon has made in healthcare. And their efforts haven't all panned out. It's time to put the pieces of the company's healthcare strategy together to decipher who might really be at risk. 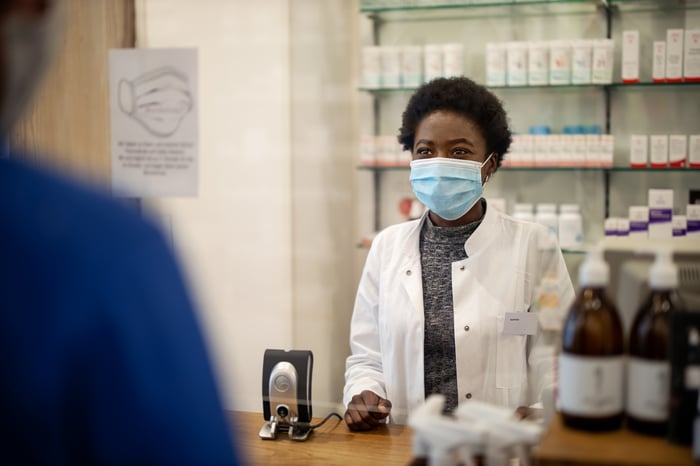 The most notable announcement Amazon has made to date was definitely in January 2018. Haven, Amazon's healthcare venture with partners JPMorgan Chase and Berkshire Hathaway, had a famous CEO and freedom from worrying about profits while serving the companies' combined 1.2 million employees. Without much to show for the effort, Haven announced last month that it would be disbanding. For its part, Amazon continues rolling out services aimed at consumers.

The company has begun opening health centers in close proximity to its fulfillment centers. It's expected that 20 centers will be built in five cities through the first phase of the program. Similarly, the company opened a clinic for its Seattle-based employees designed to leverage technology for text, video, and in-person care. The clinic is bolstered by Health Navigator, a symptom checker and triage tool it purchased in 2019.

The most recent announcement of Amazon Pharmacy is actually Amazon's second attempt to bring the prescriptions business online. The market was deemed too complicated after its first attempt, a 1999 investment in Drugstore.com, failed. This time, the company has a pandemic keeping many Americans out of stores. Deep discounts on generic and branded drugs and free delivery for its more than 150 million Prime members might be enough to take on the pharmacy industry incumbents.

The company is also leveraging its consumer devices to add value for both consumers and clinicians. Amazon Alexa is now Health Insurance Portability and Accountability Act (better known as HIPAA)- compliant, allowing it to integrate with connected devices. For instance, the Omron Heartguide, the first U.S. Food and Drug Administration (FDA)-approved blood pressure monitor in watch form, has an Alexa skill that allows users to track readings and averages, as well as set alerts and call out reminders. The company also released its $99 screenless Halo fitness tracker last year that can monitor voice tone and body fat. It's all part of a health and wellness division the company is building within the Alexa unit. The initial plans are reportedly focused on patients with chronic conditions, like managing diabetes or supporting the elderly, as well as parents with newborns. Of course, the benefits of Alexa aren't confined to the home.

Amazon has partnered with several health systems to make caring for patients easier. One example, Aiva, is an Alexa-powered Echo device that understands medical text and patient information, and allows nurses and patients to interact with each other, as well as with devices in the room. It's currently only available to Amazon Web Services (AWS) cloud customers. Luckily for many patients, Cerner (CERN -0.29%), which controls 26% of the electronic health record market for hospitals, selected AWS as its preferred cloud provider in 2019.

AWS is also finding powerful new applications to benefit healthcare organizations. In December, the company launched Healthlake, a service that aggregates data and standardizes it using machine learning. This allows more efficient searches, analysis, and predictions for entities across the industry, from healthcare systems to drug companies and insurers.

The cloud segment has also used machine learning to help hospitals optimize operations and improve diagnoses. In one example, a Boston-based medical center used Amazon's artificial intelligence to improve patient flow in the hospital by optimizing scheduling and scanning health records for required documents. In another, several Pittsburgh-based organizations partnered with AWS to use machine learning for early breast cancer detection and depression screening. The AWS model outperformed the existing breast cancer detection method by 35%.

Where is all this going?

Despite the seeming web of technological tools across the entire patient journey, there is a common thread that defines Amazon's strategy. Not surprisingly, it goes back to the company's days as an online bookseller. In his 2008 letter to shareholders, CEO Jeff Bezos wrote that everywhere the company looked, it saw "muda," the Japanese term for waste. In a world full of processes, eliminating waste is Amazon's north star.

Building clinics near fulfillment centers eliminates the wasted resources incurred when an employee has to drive across town to see the doctor. Allowing Prime members to get prescriptions delivered to their homes eliminates the need to go pick them up and the potential problems that arise when those medications aren't taken. A nurse walking to a patient's room to find out what they need is wasted effort when they can just ask through an Alexa-enabled device. A hospital using machine learning to improve flow eliminates the downtime in operating rooms and empty beds, allowing them to care for more patients. A doctor using artificial intelligence to provide a more accurate diagnosis avoids the waste of ill-suited treatments and increases the chances of survival from early detection.

Throughout its history, Amazon has found ways to use technology to eliminate waste. From the standpoint of gaining market share through improved customer experience, the healthcare industry's waste is Amazon's opportunity. If history is any lesson, any healthcare company with frustrated customers should be very nervous.