Please ensure Javascript is enabled for purposes of website accessibility
Log In Help Join The Motley Fool
Free Article Join Over 1 Million Premium Members And Get More In-Depth Stock Guidance and Research
By Sushree Mohanty - Feb 17, 2021 at 6:00AM

Each business brings something to the table, but how wise is their decision to combine?

On Dec. 16, 2020, two major Canadian marijuana players, Aphria (APHA) and Tilray (TLRY), announced they would be merging, and in turn, forming the "largest cannabis company in the world" in terms of pro forma revenue.

As the marijuana industry grows, it has invited a lot of mergers and acquisitions (M&A). Perhaps the most notable have been between U.S. beverage companies and Canadian pot companies that have joined forces to expand cannabis product offerings both in the U.S. and Canada. Aphria, for instance, acquired American craft beer maker SweetWater Brewing to make a footprint in the cannabis beverages market.

The news of a combined Aphria-Tilray business has investors excited, on top of general sector enthusiasm. The industry benchmark, the Horizons Marijuana Life Sciences ETF, has soared 95% so far this year. Let's take a closer look at the terms of their agreement and if this merger will in fact live up to its hype for both Aphria and Tilray. 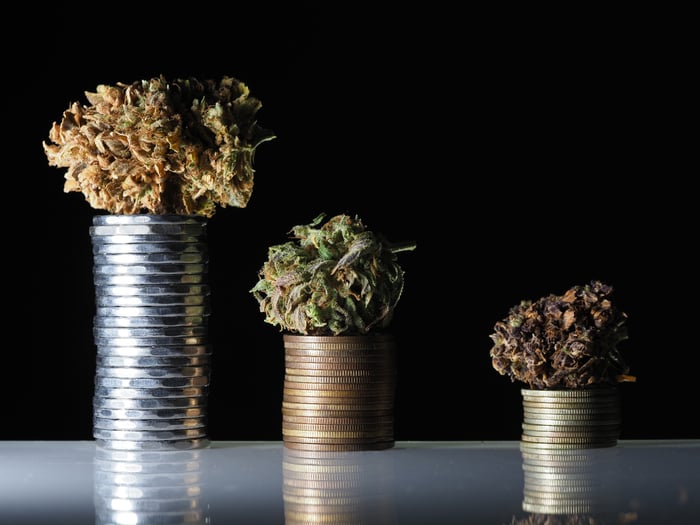 I have always favored Aphria as a cannabis pick, mostly because early on, it decided to focus on its efforts in Canada instead of going on a rampant acquisition spending spree. I also appreciate its excellent leadership team led by CEO Irwin Simon, its effective cost management strategies, and its ability to consistently report positive EBITDA (or earnings before income, tax, depreciation, and amortization). Tilray, on the other hand, has focused more on the medical cannabis market, which has restricted its growth to some extent. But the merger news has put Tilray on the map again. Its market cap has risen from $1.1 billion on Dec. 5 to $4.5 billion as of Feb. 16. Tilray's stock also got a recent boost from the Reddit trading community on optimism surrounding the merger and after the company reported a new distribution agreement in the U.K.

But bigger is not always better. A larger company involves more complications like hidden inefficiencies, merging costs, personnel issues, and overestimating cost synergies. However, in the cannabis industry, which has historically struggled either to obtain capital or to overcome regulatory hurdles, a bigger company might have the resources to solve many of these problems. With combined supply chain and operation efficiencies, the Tilray-Aphria merger aims to generate close to 100 million Canadian dollars of pre-tax annual cost synergies. Cost synergies typically mean a reduction of costs because of the merger that allows them to take advantage of each other's efficiencies (such as competitive innovative products, high-class production facilities, growth strategies, the scale of operations) to generate more sales.

But the companies also claim they would be creating the top cannabis company in the world with revenue of $685 million (CA$874 million), which I think is going to be a tough position to maintain. Aphria reported 33% year-over-year revenue growth in the second quarter of fiscal 2021 ended Nov. 30. Meanwhile, Tilray showed no growth in revenue, reporting CA$68.1 million in the third quarter of 2020, which ended Sept. 30. On the other hand, U.S. cannabis company Curaleaf Holdings (CURLF -1.21%) has already generated total revenue of $357 million in the nine months ended Sept. 30, 2020, which was a whopping jump of 208% compared to the year-ago period. 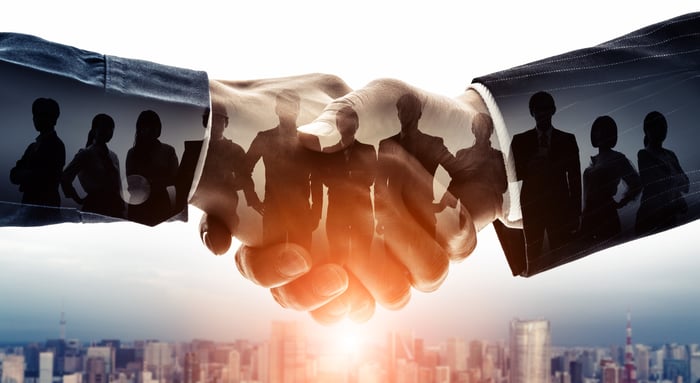 How will the new entity benefit from this merger?

With Tilray's medical presence in the EU, the combined company can strengthen its medical cannabis segment. Tilray has a cultivation license from the government of Portugal to produce medical marijuana products, which it plans to export to the EU market. Tilray's management believes its Portuguese facility, which could cultivate roughly 40 metric tons of dried cannabis, will give it a competitive advantage in the EU and Israeli medical cannabis markets.

The European cannabis market could grow at a compound annual growth rate (CAGR) of 29.6% to be valued at $37 billion by 2027, a lucrative opportunity for the combined entity.

Furthermore, a strong balance sheet and cash reserves will allow both companies to expand their cannabis derivatives market. Cannabis derivatives are additional recreational products that Canada legalized as part of "Cannabis 2.0" legalization in October 2019. Derivatives have become quite a high-margin product because of the variety offered and the popularity among consumers who do not want to consume cannabis in the traditional way of smoking. Aphria's vape products are quite popular; they generated 18% of its total cannabis revenue in its recent Q2.

But Aphria hasn't gone far beyond vapes in the derivatives segment. Meanwhile, Tilray has taken some steps in entering the derivatives segment. In October, along with its wholly-owned subsidiary, High Park Holdings, Tilray launched a new line of cannabis-infused edibles. Aphria's entry into the cannabis beverage segment through SweetWater can also help boost the new companies' revenue, providing good competition to peers in the recreational pot segment.

Both companies are strong in their medical cannabis businesses. So, this merger should allow them to pool resources and bring to market some exciting new derivatives products.

Is it the right time to grab these two stocks?

I am excited to see that Irwin Simon will still lead the new combined company as chairman and CEO. Irwin has proven his expertise as CEO in handling Aphria since he took the reins in 2019. While handling a bigger company might be challenging, let's not forget that Simon founded and led packaged goods company Hain Celestial Group as CEO for 25 years. We will get to know more about this merger when Tilray reports its fourth-quarter fiscal 2020 results today, Feb. 17. 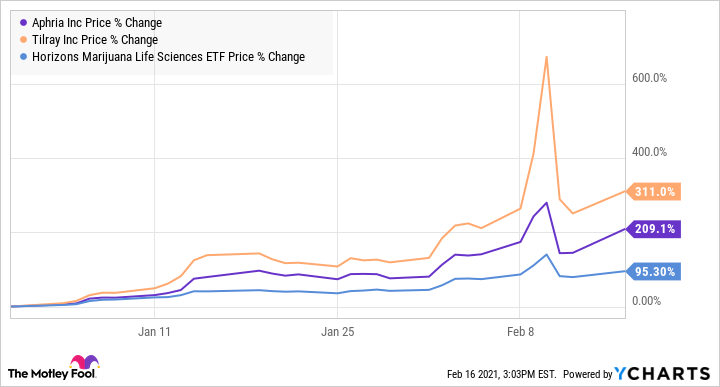 So far this year, Aphria has gained a whopping 209%, while Tilray is soaring high, having gained 311%, despite a sharp drop post-Reddit-driven trading mania.

Investors who already hold these stocks have enjoyed a good gain so far this year, and can continue holding them until the combined entity bears good financial results. Though most of these drastic stock gains revolved around the optimism surrounding the merger, which helped invite the Reddit frenzy.

Do not expect any drastic changes in the short term, as mergers involve a lot of complications. The chances of this merger working out successfully will depend on many factors, and it could take some time to see the rewards of creating a bigger business. But if you are an investor with a long-term investment horizon who believes in the marijuana industry's potential, either of these two cannabis stocks could be the right choice for you.