Please ensure Javascript is enabled for purposes of website accessibility
Log In Help Join The Motley Fool
Free Article Join Over 1 Million Premium Members And Get More In-Depth Stock Guidance and Research
By John Ballard - Feb 19, 2021 at 11:14AM

The online tech titan is dominating retail and is one of the most highly valued companies in the world.

At roughly $3,300 a share, Amazon's (AMZN 2.57%) stock price looks expensive, but you can't judge a stock by its price alone. Another way to think about buying a stock is to think about what you would have to pay to own the whole company (assuming you could).

Amazon's current market capitalization is $1.67 trillion. That is what you would have to pay to buy all of Amazon's shares outstanding at their current stock price. That too looks expensive, but it actually may not be when you factor in the company's earnings potential. That high market cap is a reflection of investor confidence that Amazon will grow revenue to levels in line with its overall value.

We all want to see our stocks go up in value over time. But for investors to make a good return on Amazon stock from these levels, the company will need to generate yearly revenue that is reasonable in relation to its current market cap.

Does Amazon have what it takes to generate multi-trillions a year in revenue down the road? 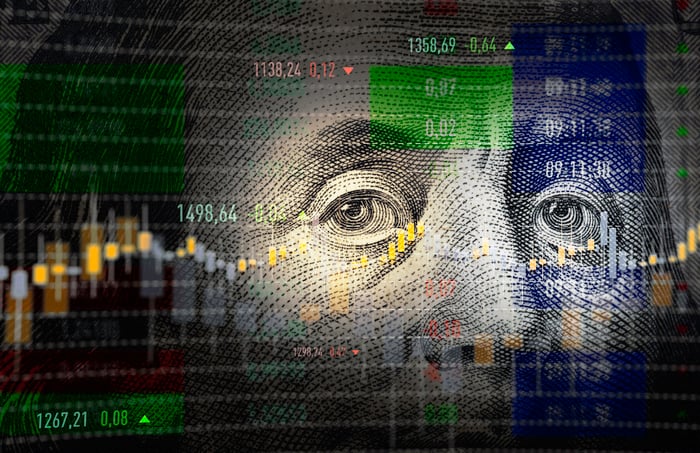 Amazon has delivered extraordinary growth since its founding in the 1990s, and it still has opportunities to keep the momentum going. While Amazon hasn't been successful at everything it's tried (e.g., the Amazon Fire Phone), the e-commerce giant has stretched its tentacles successfully into several markets, including streaming video, grocery delivery, and cloud services, and it's still in the early stages of growth in all these markets.

In 2020, Amazon generated a massive $386 billion in net revenue, with 12% of that coming from the Amazon Web Services cloud business. Most impressive is that Amazon's core retail business is still going strong domestically, posting a year-over-year sales increase of 40% in North America in the fourth quarter, which is not far off the pace of international sales, which increased by 57%.

The company got a huge boost from stay-at-home shoppers during the pandemic. Data from the U.S. Department of Commerce shows that total retail e-commerce sales grew 37% in the third quarter, representing a sharp acceleration from pre-pandemic trends. Even with so many people turning to online shopping last year, e-commerce still only made up about 13.5% of all retail sales in the U.S. during the third quarter. It may take decades before e-commerce becomes a more meaningful percentage, providing Amazon a long runway of growth.

With this much opportunity, Amazon could easily generate more than $1 trillion in net yearly revenue at some point, which makes its current market cap look less expensive.

Management reported on the fourth-quarter conference call that Prime customers, who total more than 150 million, continue to shop with greater frequency and across more categories than before the pandemic. Prime members are also engaging more with digital perks, such as Prime Video and Amazon Music, making them more loyal customers.

Amazon has built a powerful flywheel of growth by blending physical store experiences, such as Whole Foods and Amazon GO stores, with the perks that come with a Prime membership.

The company still has plenty of growth potential with its core retail business, but investors also love Amazon for its leading market share position in cloud infrastructure services.

If you're thinking of buying Amazon stock, you need to be aware that Amazon Web Services (AWS) made up most of Amazon's operating profit last year. AWS is now a $51 billion annual run rate business that is generating healthy margins. More organizations continue to shift their data systems from on-premise servers to the cloud, which sent AWS sales up 28% year over year in the fourth quarter.

Expensive or priced about right?

The increasing profit contribution from AWS is one reason why Amazon's stock price has surged more than 500% over the last five years. But about half of that return also came from a near doubling in the stock's price-to-sales multiple.

Compared to other top e-commerce stocks, such as Etsy and Shopify, the online retail giant offers relatively good value. Amazon is cheaper based on price-to-sales and price-to-earnings ratios, and is No. 2 among the three when valued on free cash flow. 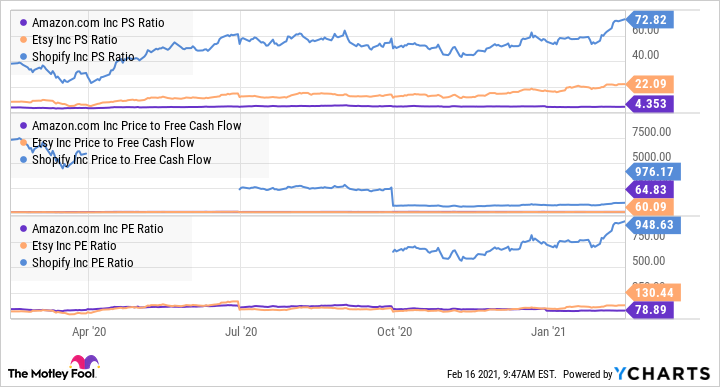 Some investors may wonder if Amazon stock is still a good buy since founder Jeff Bezos will be stepping down as CEO in the third quarter to transition to the role of executive chair. Amazon is a well-oiled machine at this point, so investors shouldn't notice any changes in the company's performance.

Moreover, Bezos will still have an active role in overseeing the company and still owns a stake worth around $200 billion.

With so much opportunity ahead in e-commerce globally, Amazon remains a top growth stock to consider.