Please ensure Javascript is enabled for purposes of website accessibility
Log In Help Join The Motley Fool
Free Article Join Over 1 Million Premium Members And Get More In-Depth Stock Guidance and Research
By Rick Munarriz - Feb 20, 2021 at 8:05AM

You'll be celebrating Disney's Florida resort turning 50 later this year well into 2023. There's a method to the Mickey Mouse madness.

Walt Disney's (DIS -0.71%) most visited theme-park resort is gearing up for a major milestone. Disney World in Florida turns 50 in October, and the House of Mouse is hoping to take as long as it can to blow out the candles. Disney announced on Friday that it will stretch the celebration to a full 18 months. In short, we'll be celebrating Disney World's 50th year of existence later this month until the end of March in 2023.

Disney is no stranger to milking its milestones for as long as possible. It just happens to be a particularly smart move for Disney to take this route right now. In this challenging climate, the further out you go into the future, the brighter the prospects become for things getting back to normal for the theme park operator. 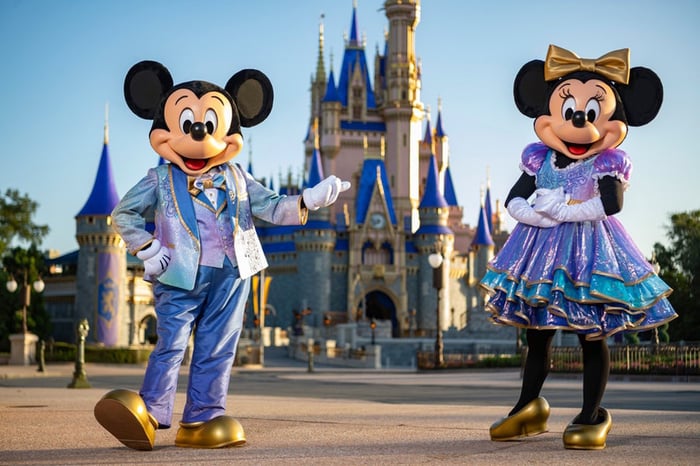 Disney World reopened in July of last year after a thorough social distancing makeover. Guests are spaced out from one another in queues. Plexiglass partitions protect guests at the expense of partially obstructing views. Most shows, parades, character interactions, and nighttime festivities are either suspended or scaled back dramatically to keep crowds from gathering in large groups. Masks are required at all times unless one is eating or drinking while stationary.

It's a buzzkill, but it's better than being Disneyland. Right?

Disney World is also currently allowing just 35% of each theme park's regular capacity in at any given time. It's requiring guests to make reservations in advance to visit a particular park on any given day.

Disney World is also limiting annual-pass sales to renewals at the moment, but it's better than being Disneyland and eliminating the passes entirely. Right?

In an earnings call earlier this month, CEO Bob Chapek said he doesn't see masks going away in 2021. He's hopeful that required face coverings and social distancing measures will be gone by 2022, and that's just another good reason for 546 days of partying.

Time will help bring visitors and the economy back. It may also help get some projects back on track, too.

A lot of the new rides and experiences that Disney World was unveiling four years ago in anticipation of the resort turning 50 either won't be ready in October or have been quietly wiped off the board. No one expects the Tron-themed roller coaster at Disney's Magic Kingdom to be open by October, but it should definitely be rolling at some point during the celebration. A 900-room nature-inspired lodge, as well as several Epcot attractions, including a Mary Poppins ride, have been scrapped for the moment.

Disney is fortunate to be a well-diversified media stock right now. The shares are riding high as Disney+ carries the growth baton that's sending the stock to all-time highs.

Disney World isn't ready for a celebration right now, but it's quite possible that the baton may be snugly in its grasp at some point before the springtime of 2023 for it to be the lead sprinter. It may take time for Disney World to get back to where it was a year ago, but that's why an 18-month party clock is a brilliant timepiece for the world's most successful theme-park operator.