Although it clawed back some of the gains by lunchtime, investors really didn't like Cinedigm's quarterly update.

Shares of digital cinema and streaming company Cinedigm (CIDM 2.29%) fell 30% out of the gate on Feb. 23. By roughly 12 noon EST the stock had regained some ground, but was still lower by a painful 17% or so. The big story was earnings, which were released after the market closed on Feb. 22. Investors gave the quarterly highlight reel bad reviews.

Cinedigm is a company in transition. Its historical business was providing digital movie equipment to movie theaters, which is a business that has been deeply impacted by the coronavirus pandemic. Although the company didn't break out numbers for this business, it noted that declines here were behind a 13.5% year-over-year drop in revenue in the fiscal third quarter. Meanwhile, adjusted EBITDA fell 66% and, on a GAAP basis, the company lost $0.07 per share compared to a loss of $0.05 per share in the same period of the prior fiscal year. 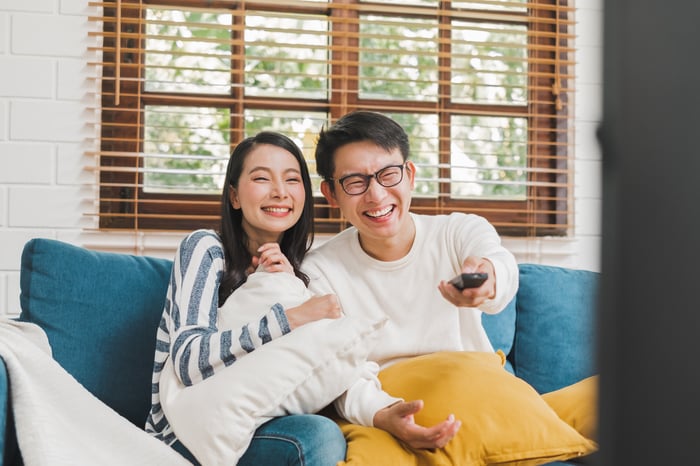 Headlining the quarterly update, however, was news of the company's transition toward online streaming, with a focus on niche content, like its Bob Ross inspired "channel" or one dedicated to horror content called Screambox. This is a fast-growing business, with streaming revenue up 85% year over year. However, the total subscriber base is just 245,000, up more than 200% over the past 12 months thanks to acquisitions and internal growth. That's a pretty small number when you compare it to the streaming industry's heavyweights, and it highlights that Cinedigm's growth is coming off a small base. Although it's nice to see the company adjusting to the times, it still has a long way to go before this transition is anywhere near complete.

One other highlight from the quarter that's worth noting is that Cinedigm's debt was cut in half year over year, partly the result of a conversion of a convertible note into stock. It also sold stock to raise additional cash. Which brings up a fairly important figure -- the average share count, found on the company's statement of operations, increased by more than 200% year over year. That massive increase actually hid the company's quarterly loss to some degree, with the absolute value of its net loss increasing to $9.7 million from the prior year's roughly $2.3 million, an over 300% jump. (A larger absolute loss spread over more shares results in a smaller per share loss.) While it is easy to argue that Cinedigm's makeover is a work in progress, it's not hard to understand why investors might be displeased with the progress at this point.