Please ensure Javascript is enabled for purposes of website accessibility
Log In Help Join The Motley Fool
Free Article Join Over 1 Million Premium Members And Get More In-Depth Stock Guidance and Research
By Brent Nyitray, CFA - Feb 28, 2021 at 10:17AM

In the Robinhood era, it may be hard for some investors to believe that making a trade used to be extremely expensive. Transaction costs like bid/ask spreads and commissions used to be a lot higher. You could be starting out more than 2% in the hole the second your trade was executed.

The drop in commissions and trading costs was a tough pill for the brokerage industry to swallow, but the big exchanges like Intercontinental Exchange (ICE -0.35%) and Nasdaq (NDAQ -1.03%) have benefited from increased trading volumes. The increase in trading volume over time is so large that historical charts are done on a logarithmic scale. This is an instance where a change in an industry hurts one group (in this case, the stock brokers) but can actually help another group make more money (the stock exchanges). 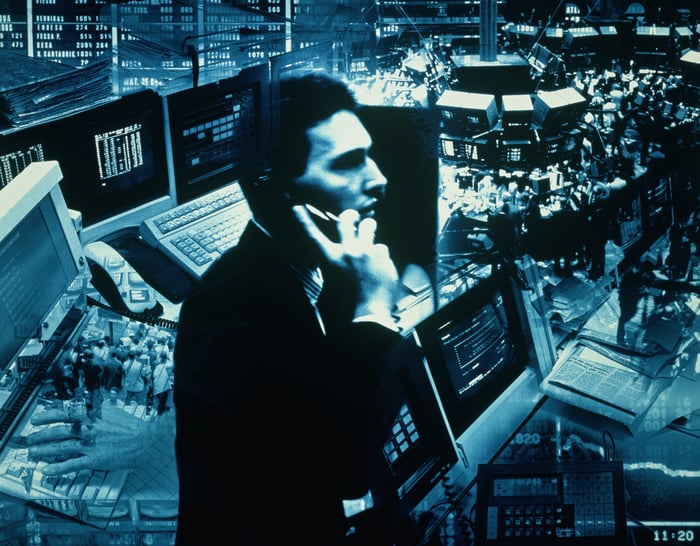 Limited competition in financial services was a key part of New Deal regulation. In order to prevent failures, the government acted to prevent "ruinous competition." This applied not only to brokers, but banks as well.

People who regularly receive AARP solicitations in the mail will remember when banks would offer a free toaster to open up a savings account. This was how banks competed with one another. The interest rate they could pay on a savings account was limited by law. Since everyone paid the same rates, and kept the same hours, customers would have few choices, and go with the bank that had the most local branches. This was the state of affairs until banking deregulation in the 1970s.

For brokerage firms, commissions were fixed. Every broker was required by law to charge the same price to everyone: $49 per trade, no matter the size of the transaction. The small investor who was buying 100 shares of a $25 stock paid the same price as the local pension fund that was buying 10,000 shares at a clip.

May Day meant the cozy state of affairs was over

On May 1, 1975 (known in the industry as May Day), stock trading commissions were deregulated, which meant brokers could charge whatever they wanted. Predictably, commissions began falling like a stone. Charles Schwab (SCHW -0.86%) was the first discount broker, offering cut-rate service along with a cut-rate platform. As commissions fell, hundreds of smaller brokerages went out of business. Commissions continued to fall throughout the 1970s and 1980s.

Even in the mid 1990s, commissions were still sizable. I remember as a trader at a hedge fund paying $0.06 per share to trade a stock listed on the New York Stock Exchange, using a full-service investment bank, and paying $0.04 per share to the smaller boutique firms. If I wanted a dirt cheap trade, I would give the order to a floor broker (called a "two-dollar broker"), which charged $0.02 per share.

This was about to get completely upended when electronic trading was introduced. It was like a bomb going off in the brokerage community.

Electronic trading was the final step

The first big electronic trading platform was Instinet, which allowed institutions to trade anonymously, transact directly with one another, and bypass the big investment-banking trading desks. Commissions were also much cheaper on Instinet, and big institutions fell in love with it.

At the same time, smaller electronic brokers were starting, including E*Trade, now part of Morgan Stanley, and Ameritrade (now known as TD Ameritrade and owned by Charles Schwab). As technology got better, the floor broker and the specialist became smaller and smaller participants in the market.

Today, institutions pay maybe a quarter of a penny per share to trade, and retail investors can trade for free on apps like Robinhood. And bid/ask spreads? They are now fractions of a penny. That same investor buying 100 shares of a $25 stock would pay maybe a $0.001 bid/ask spread and no commission, so the investor is paying a dime. In other words, transaction costs have fallen by 99.8% since May Day in the mid 1970s. This is not great news for the big brokers, but it has been great news for the stock exchanges like Intercontinental Exchange and Nasdaq.