Please ensure Javascript is enabled for purposes of website accessibility
Log In Help Join The Motley Fool
Free Article Join Over 1 Million Premium Members And Get More In-Depth Stock Guidance and Research
By Rhian Hunt - Mar 5, 2021 at 11:27AM

The news comes shortly after Bally's posted strong earnings and an upbeat 2021 outlook.

Bally's says the arrangement lets it use the NBA's symbols in its online sports betting pages and apps and gives it the ability to tap into "official league data." The alliance is Bally's second, with the first being a deal with the NHL publicly announced on Feb. 18, approximately two weeks ago. Betting and fantasy sports for both leagues is being handled by Bally's Bet.Works, Monkey Knife Fight, and SportCaller. 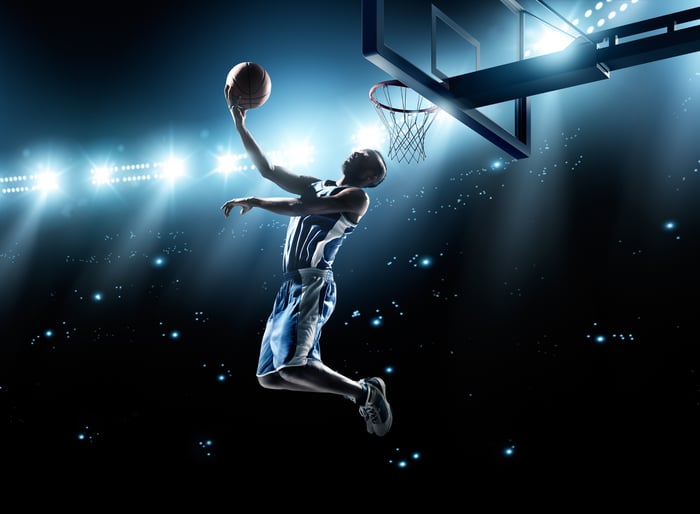 Bally's CEO George Papanier remarked the newly minted alliance with the NBA "is an exceptional opportunity for Bally's, adding to our ongoing momentum with professional sports leagues."

Investors appear to agree, with the company's shares trading up more than 1.6% in morning trading. This stands in stark contrast to sports betting rival DraftKings (DKNG 3.76%), which continues a plunge that began earlier this week with a more than 7% drop in early Friday trading.

DraftKings is falling after a pair of potentially flawed deals. The first, with DISH Network, doesn't enable seamless onscreen TV wagering, but instead requires users to complete their bet using the DraftKings app on a mobile device anyway, potentially gutting any advantage gained through the deal. The second was a partnership yesterday with MMA and combat sports organization UFC. The deal isn't exclusive, and UFC remains available on other digital sportsbooks, but DraftKings paid over $100 million for it regardless.

Why Bally's Stock Crapped Out Today