Please ensure Javascript is enabled for purposes of website accessibility
Log In Help Join The Motley Fool
Free Article Join Over 1 Million Premium Members And Get More In-Depth Stock Guidance and Research
By John Rosevear - Mar 11, 2021 at 10:51AM

A bullish take from Wall Street is giving shares a boost.

Shares of Chinese new-energy vehicle maker Li Auto (LI -2.21%) are trading higher on Thursday since a Wall Street analyst initiated coverage of the company with a bullish note.

At 10:15 a.m. EST, Li's American depositary shares were up about 6.8% from Wednesday's closing price.

In a new note on Thursday morning, Needham analyst Vincent Yu initiated coverage of Li Auto with a buy rating and a price target of $37.

Yu wrote that he's positive on the company's "differentiated" electric vehicles, which have built-in gasoline-powered generators to recharge when no charging stations are available. While fast-charging stations are common in and around major cities in China, they can be hard to find in other areas; Li has had good success selling its Li ONE SUV outside big-city areas. 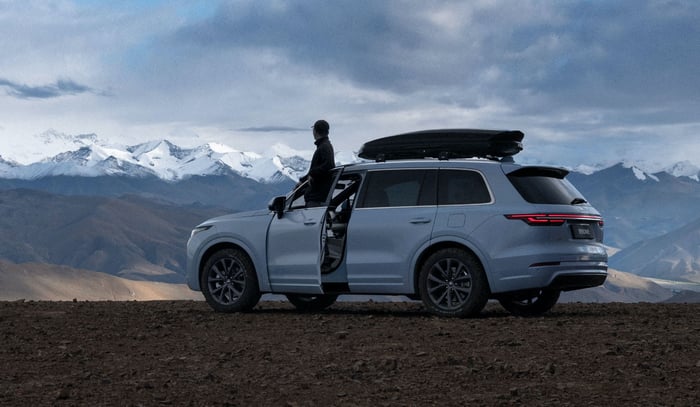 Li Auto's SUV, called the Li ONE, is an electric vehicle with a gasoline-powered "range extender" generator that makes it usable in parts of China where fast chargers are still scarce. Image source: Li Auto.

Yu also noted with approval that Li Auto has shown impressive discipline on cost and margins, and he said that discipline, along with its vehicle strategy, make it a "quality asset" in the fast-growing electric-vehicle space.

Looking further ahead, Yu thinks that Li Auto can be a longer-term play. As he noted, monthly electric-vehicle sales in China have grown by double-digit percentages since May of last year, and the Chinese government's target is to have electric vehicles make up 20% of Chinese passenger-vehicle sales by 2025.