Please ensure Javascript is enabled for purposes of website accessibility
Log In Help Join The Motley Fool
Free Article Join Over 1 Million Premium Members And Get More In-Depth Stock Guidance and Research
By Zhiyuan Sun - Mar 13, 2021 at 6:40AM

For the past five years, Schrodinger (SDGR -0.85%) has been one of the top-performing life sciences technology companies, with its stock almost quadrupling during the period. However, if an investor did not close out their positions and take their profits by the beginning of March, they could have been out of luck. When the company announced its 2021 guidance, its stock dropped 27.2% from its peak in just a week's time.

Amid wild stock price swings, many wonder if they will be catching a falling knife if they buy shares now. Is Schrodinger a safe investment at the moment? Disgruntled shareholders began ditching the stock en masse after the company announced lackluster guidance. Schrodinger expects to generate between $124 million and $142 million in revenue this year via its software and drug discovery programs. That's a substantial increase over the $108.1 million it brought in 2020. However, keep in mind that this is a company with a market cap of $4.43 billion.

Investors are not very happy about its growth, considering they are already paying 45 times sales for a company that's only growing its revenue by around 25% per year. That's pretty costly, considering the average software company only trades for 12 times revenue. 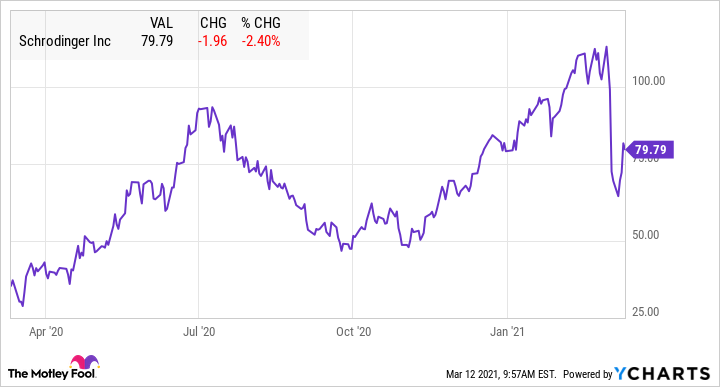 The rate of success with this platform, as you might have guessed, is absurdly low. This is because drugs must be potent, soluble, bioavailable, permeable, pass a safety clearance, act on a specific site in the body, interact with other drugs in a positive way, and be feasible to manufacture. Out of every 1 billion molecules screened by Schrodinger's software, as few as eight advanced to the laboratory testing phase. Nevertheless, all 20 out of the largest 20 pharma companies in the world use Schrodinger's platform. The company also grew its customer count to 1,463 last year, up from 1,266 a year ago.

Capital-wise, Schrodinger is profitable. In 2020, its operating cash flow amounted to $16.76 million, a significant improvement over the negative $26.05 million in operating cash flow it brought in 2019. It also has more than $643.2 million in cash and equivalents on its balance sheet, with no debt whatsoever.

One of the main problems with Schrodinger is that its software is only applicable during the drug discovery phase. The principal investigator tests the drugs on study participants and assumes the research and development expenses after it advances to the clinical stage. Since the failure rate is very high for the combinatorial drug discovery method, Schrodinger isn't left with much bargaining power on its pricing, despite having many clients.

To mitigate this, the company has a much smaller segment that involves collaboration with pharmaceuticals on drug discovery programs. It had 25 such candidates in 2019, with two oral tablets for the treatment of leukemia advancing to regulatory approval. Schrodinger receives compensation in the form of research fees, discovery and clinical milestone payments, and potential future commercial milestones and single-digit percentage royalties.

In addition, Schrodinger has a 2.7% to 50% equity stake in seven development-stage biotech firms that specialize in medical devices and small-molecule therapeutics. Investors should keep a close eye on company's stock in response to its syndicates' activities. If one or more brings a product or drug past the regulatory hurdle, Schrodinger's stock could jump.

Finally, the method of combinatorial chemistry isn't just applicable to drugs and medicines, but also toward the discovery of new materials. Schrodinger is currently looking at organic LED lights, batteries, electrolytes, and polymers as possible areas to expand the applicability of its software.

Is the dip an opportunity?

For these reasons, one can't just look at revenue and earnings alone when evaluating Schrodinger. I believe that the company has a sizable market in modernizing outdated technologies in the pharmaceutical sector and doing drug research without assuming the costly task of running clinical trials. This is a healthcare stock that you should definitely keep on your watchlist.

Why Schrödinger Dived by Almost 12% Today