Please ensure Javascript is enabled for purposes of website accessibility
Log In Help Join The Motley Fool
Free Article Join Over 1 Million Premium Members And Get More In-Depth Stock Guidance and Research
By Jason Hawthorne - Mar 14, 2021 at 7:02AM

Despite tremendous growth, the stock is cheap based on at least one common Wall Street metric.

Many stocks had an amazing year in 2020 by helping the world face the pandemic. Some were unproven biotechs, working on drugs to help defeat the virus. Others were diagnostics companies, developing tests to identify infections. As we approach spring and the world eagerly eyes a summer without social distancing, it is time to separate the companies that will fade into the background as COVID-19 wanes from those whose underlying businesses will fuel continued growth in 2021 and beyond.

Fulgent Genetics (FLGT -2.66%) is one of last year's winners primed for continued growth. The company just reported an amazing year, and its core genetics testing business is ready to pick up the torch when COVID-19 testing declines. The company has added volume much faster than expenses, and that one-two punch could make Fulgent stock a buy for investors who can withstand the volatility. 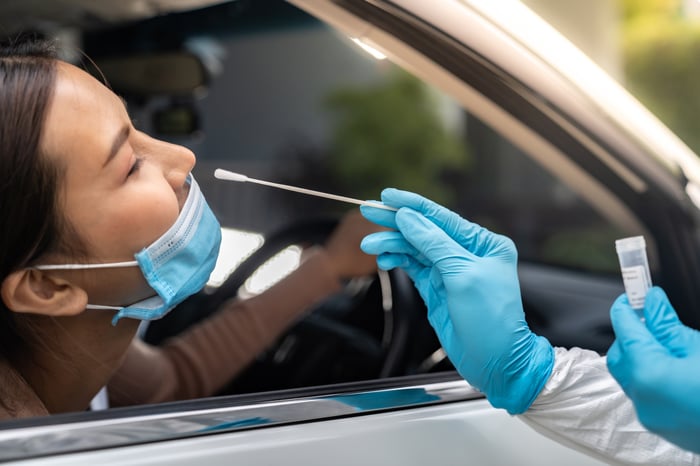 Coming into 2020, Fulgent Genetics was already growing rapidly. Its $32.5 million in sales for 2019 might not have been much, but it was 52% more than in 2018. Even then, management was highlighting its operating leverage -- the ability to turn the bulk of additional sales into profit. Hindsight shows this was true, but nothing could have prepared the company for the ramp-up in volume it would experience in the next 12 months.

2020 revenue of $422 million was 12 times more than the previous year. Fulgent's growth accelerated through the year, with fourth-quarter sales growing 3,400% year over year and testing volume of 230 times 2019 levels. Growth like that is hard to wrap your mind around, but a once-in-a-century pandemic will do that. What may be more impressive is the 90% growth management expects this year. Much of that is thanks to genetic testing, Fulgent's core business with impressive numbers that has been overshadowed due to so much COVID-19 testing.

After dropping 30% in the first two quarters of 2020 compared to 2019, the core business rebounded in the second half of the year, posting 57% and 43% year-over-year growth in the third and fourth quarters, respectively. Both Wall Street and management had a hard time keeping up with the turnaround and the boost in COVID-19 volume after the company's diagnostic test was authorized in May. As recently as August, management had projected $125 million in revenue for the year, only to end up more than doubling it by December.

With so much uncertainty, the stock has traded wildly. At one point in February, shares were up 1,300% from where they began 2020. From there, they proceeded to drop over 50%. However, the short-term gyrations in the stock price could be distracting from the longer-term story.

Since going public, a consistent theme in management's comments has been the company's best-in-class cost structure. Specifically, despite offering more than 19,000 genetic tests, management believes its technology platform and proprietary lab operations allow it to continually decrease costs to customers while improving profitability. It's hard to argue with the numbers. Fulgent performed 4.4 million tests last year compared to only 60,000 the year before. With the increased volume -- and revenue -- both gross margin and operating margin rocketed higher. This means that the company performed far more tests without adding nearly as much expense, just like it said it could.

The discipline led to earnings-per-share of $9.44 last year and a projected $12 this year. Those numbers produce a result you don't often see -- a company with a price-to-earnings ratio (P/E) below its growth rate. Actually, the P/E ratio divided by the 27% projected 2021 earnings growth produces a price-to-earnings-growth ratio (PEG) of 0.3. For context, famed investor Peter Lynch popularized the PEG ratio when he claimed a fair price for a stock was when its PEG ratio was 1.0. That was the 1980s. These days, even stable stocks like Apple, Microsoft, and Alphabet all trade at double Lynch's suggested target. It is clear the market thinks the company's sales and profits will reset lower when there isn't as much need for COVID-19 testing.

The success can be sustained

There are at least two factors that will help Fulgent sustain its recent success. First, its performance in meeting customer needs is exemplary. The state of California recognized the company as the top provider of COVID-19 testing, in part for delivering more than 90% of results within 24 hours, and 97% within 48 hours. It's that type of accomplishment that has led to deals with federal agencies, school systems, sports leagues, cruise lines, and more.

Second is its intent to drastically increase growth investments. CEO Ming Hsieh has talked about a significant increase in headcount related to sales and marketing, expanding internationally, and the possibility of an acquisition. Now that the coffers are full, Hsieh is ready to spend on gaining market share, and shareholders should be excited. The genetic testing market is expected to grow to $23 billion by 2027.

The past year has been wild as the company ramped up testing and both management and Wall Street tried to keep up, sending the stock price up and down like a roller coaster. Looking back, Fulgent validated both its cost structure and its operational excellence, posting big profits and earning recognition from customers. Uncertainty in 2021 and beyond may be keeping the stock cheap using a traditional valuation metric, but for investors who can handle volatility, Fulgent keeps proving it has the recipe to reward shareholders. For those who plan to hold for years, this fast-growing diagnostics company could make a nice portfolio addition.