Please ensure Javascript is enabled for purposes of website accessibility
Log In Help Join The Motley Fool
Free Article Join Over 1 Million Premium Members And Get More In-Depth Stock Guidance and Research
By Keith Speights - Mar 5, 2021 at 6:01AM

The genetic-testing company is firing on all cylinders.

Fulgent Genetics (FLGT -2.66%) stock absolutely skyrocketed throughout January and early February. But after shares rose more than 250%, Fulgent's momentum seemed to fizzle out. That fizzle is likely to return to a sizzle now, though.

The genetic-testing company provided its fourth-quarter update after the market close on Thursday. The healthcare stock soared more than 30% in after-hours trading. Here's how Fulgent Genetics wowed with its Q4 results. 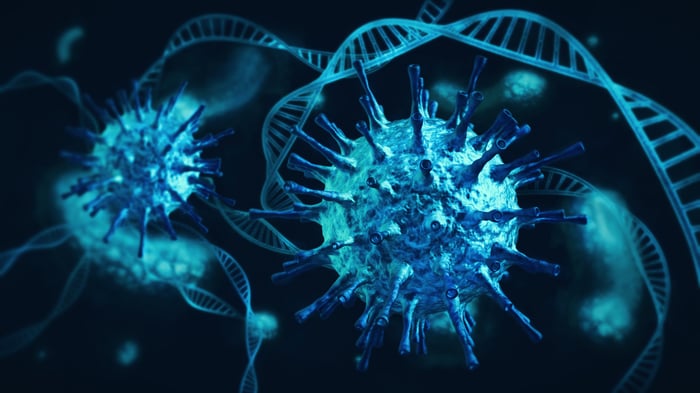 Fulgent generated revenue in the fourth quarter of $295 million, a massive 3,400% leap from the $8.4 million reported in the same quarter of the previous year. This result trounced the average analyst revenue estimate of $199.4 million.

The company reported net income in the fourth quarter of $166.3 million, or $6.16 per share, based on generally accepted accounting principles (GAAP). In the prior-year period, Fulgent posted a GAAP net loss of $296 million, or $0.01 per share.

Fulgent's Q4 adjusted net income totaled $167.5 million, or $6.20 per share. This reflected a huge improvement over its adjusted earnings of $778,000, or $0.04 per share, recorded in the prior-year period. It also blew past the Wall Street consensus adjusted earnings estimate of $4.05 per share.

COVID-19 is pretty much all you need to know about Fulgent's stellar fourth-quarter results. Most of the company's revenue growth came from its COVID-19 testing. However, it wasn't completely a pandemic parade: Fulgent's non-COVID revenue jumped 43% year over year.

The company reported 3.2 million billable tests in the fourth quarter overall. That was roughly 230 times the volume achieved in the prior-year period. Unsurprisingly, it was also the highest volume Fulgent has ever had in a quarter.

Fulgent's top-line growth carried down to the bottom line, as well. However, it's important to note that the company's gross margin rose more than 8 percentage points, compared to the previous quarter, and close to 26 percentage points year over year.

While Fulgent's spending increased a lot, the growth rate was well below its revenue growth. Total operating expenses more than tripled year over year to $17.3 million. That paled in comparison to the company's 35 times revenue increase.

Fulgent Genetics looks for revenue in the first quarter of at least $325 million. For full-year 2021, Fulgent projects revenue of around $800 million -- a 90% year-over-year increase. It estimates that next-generation sequencing (NGS) testing revenue will soar 92% to $70 million.

CEO Ming Hsieh thinks that the company is poised to keep its momentum going even beyond the pandemic. He said in the Q4 earnings press release that Fulgent believes that it has "laid a very strong foundation for continued growth in the years ahead." He particularly pointed to new customers and reimbursement agreements, as well as the company's expanded capacity and product offerings.

Fulgent's shares have been highly volatile so far this year. Part of that volatility was due to a short squeeze. The stock could still be volatile going forward, but it seems likely to be the kind of volatility that will make investors happy.