This investment firm is bullish on the sporting goods company's long-term prospects.

Seller of sports equipment and apparel Dick's Sporting Goods (DKS -14.22%) got a thumbs-up from Williams Trading in the first-ever research note and rating from the firm. Williams rated Dick's as a buy and assigned a $100 price target, which is more than 28% higher than the company's share value at the time the firm weighed in.

In initiating coverage, Williams Trading analyst Sam Poser explained some of the reasoning behind the bullish announcement. He said, "product offerings initially brought new & old consumers to Dick's Sporting Goods and Golf Galaxy during the pandemic" and noted Dick's handling of its business converted many new customers into regular shoppers while retaining existing customers. 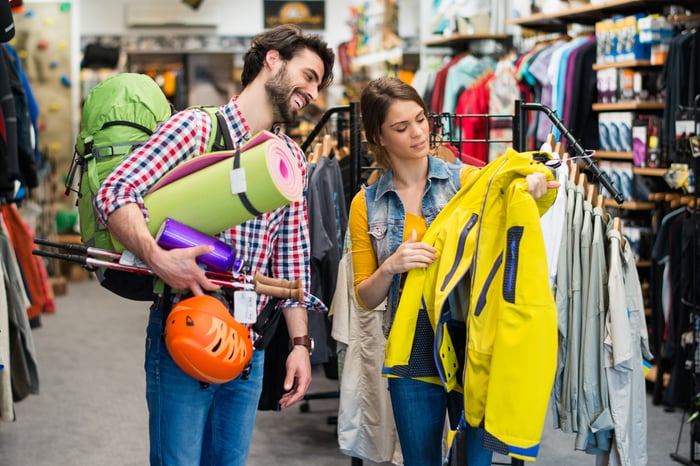 This "strong engagement," his research note said, was "driven by best-in-class omni-channel capabilities, enhanced by an evolution in use of data" along with "improved training at store level."

During Dick's recent earnings call, CFO Lee Belitsky said same-store sales in 2021 are likely to fall between "negative 2% to positive 2%, which, at the midpoint, represents a low double-digit sales increase versus 2019." Starting in the second quarter, the company expects comparable sales, or comps, to "decline in the range of high single-digits to low double-digits" simply because they can't keep pace with 2020's explosive gains over the same period.

Williams Trading, however, believes this guidance to be conservative and thinks Dick's will perform better than its own expectations.

The firm opened its positive coverage of Dick's Sporting Goods one day after the retailer launched its VRST men's clothing brand. The VRST line is Dick's second exclusive brand along with CALIA and is aimed at the "intersection of casual wear and athletic apparel," according to the press release.