Please ensure Javascript is enabled for purposes of website accessibility
Log In Help Join The Motley Fool
Free Article Join Over 1 Million Premium Members And Get More In-Depth Stock Guidance and Research
By Keith Speights - Mar 19, 2021 at 6:01AM

It definitely could have more upside potential.

Many of the other holdings in the ETFs managed by Wood don't receive as much attention. However, she pointed to one of them earlier this month in a CNBC interview, referring to it as one of the "most underappreciated" stocks that she owns.

What is this underappreciated stock -- and could it be an even better buy than Tesla? 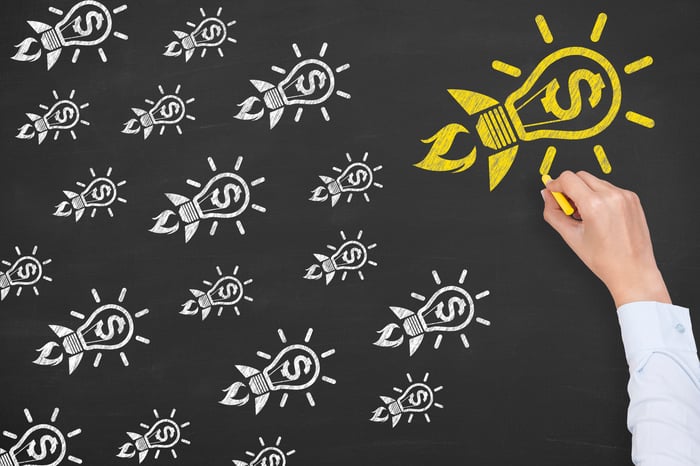 It's in the genes

Wood singled out medical genetics leader Invitae (NVTA -9.47%) as an especially underappreciated stock. The company states that its mission "is to bring comprehensive genetic information into mainstream medicine to improve healthcare for billions of people."

Invitae offers a wide range of genetic testing. Individuals can determine their risks of passing on genetic conditions to children and the most suitable embryos to help ensure a healthy pregnancy can be identified during in vitro fertilization. Healthcare providers can order genetic diagnostics tests for an extensive and growing list of conditions.

Over the last five years, Invitae's trailing-12-month revenue has skyrocketed over 2,400%. That performance trounces Tesla's revenue growth of around 640% during the same period.

Unlike Tesla, however, Invitae isn't profitable yet. But the genetic testing company has a path to profitability over the next few years, especially with the recent acquisitions of ArcherDX and One Codex expanding Invitae's capabilities.

In the past, the high costs of genetic testing served as a limiting factor for growth in the market. But technological innovations in gene sequencing have reduced the costs of testing and opened the door to a massive potential market.

Invitae CEO Sean George told CNBC last week that the scenario for genetic testing is similar to what happened in the computing and networking industry around four decades ago. Lower semiconductor costs back then set the stage for an explosion in the market.

How big could the explosion be in genetic testing? Invitae thinks that its total addressable market tops $150 billion annually. It projects that the genetic testing opportunity in senior adults ages 65 and over alone is around $63 billion. The company estimates that the potential genetic-testing market in adults between the ages of 41 and 65 totals around $60 billion.

Invitae believes that it's at an inflection point in the transformation curve for genetic testing. As the company continues to drive costs lower and expands its menu of tests, it expects testing volumes to increase significantly.

To be sure, Invitae hasn't been as big of a winner as Tesla so far. Over the last five years, the healthcare stock has quintupled in value. During the same period, however, Tesla skyrocketed close to 1,500%.

But could Invitae be a better pick than Tesla over the long run? When asked in a Bloomberg interview in December which stock could fuel the biggest gains for ARK ETFs over the next five years, Wood acknowledged that Tesla is in the running. However, she also stated, "The biggest upside surprises are going to come from the genomics space."

That doesn't mean Invitae is necessarily the genomics stock that will emerge as the major surprise winner of the future. It could be, though.

The company's market cap currently stands at only around $8.5 billion. Invitae could potentially be a 10-bagger if it snags a double-digit share of its addressable market. While Tesla has been remarkably successful, it's a stretch to envision the stock becoming a 10-bagger again.

Invitae just might be a better buy than Tesla right now. Even if it's not, though, there's a really good chance the stock won't remain underappreciated for too much longer.