Please ensure Javascript is enabled for purposes of website accessibility
Log In Help Join The Motley Fool
Free Article Join Over 1 Million Premium Members And Get More In-Depth Stock Guidance and Research
By Evan Niu, CFA - Mar 19, 2021 at 10:00AM

Lightning eMotors and Proterra are partnering to make electric delivery vehicles, some of which will be delivered to the e-commerce behemoth.

Beyond the consumer market, commercial vehicles are one of the most exciting growth frontiers for electric vehicle (EV) companies. Two such start-ups, both of which are going public by merging with special-purpose acquisition companies (SPACs), are now teaming up to address the growing demand to electrify commercial fleets as large organizations seek to address climate change while simultaneously pursuing operating cost savings.

As the largest e-commerce platform in the world that is aggressively integrating last-mile delivery, Amazon (AMZN -2.35%) is a massive customer to pursue, and the company has been partnering with a handful of EV companies in recent years to develop custom electric delivery vans as part of its Climate Pledge. 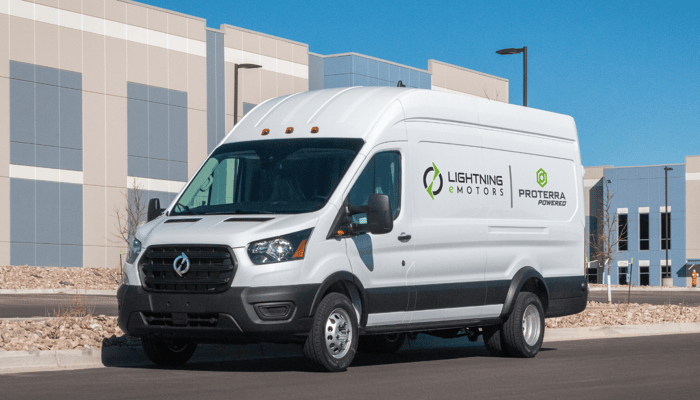 Two SPACs are better than one

Proterra, which is merging with ArcLight Clean Transition (ACTC), just announced a partnership with Lightning eMotors, which is merging with GigCapital3 (GIK). The two EV specialists are joining forces to make the Lightning Electric Transit vehicle, a Class 3 commercial vehicle. Lightning eMotors will build the vehicle, while Proterra will supply the battery pack technology. Proterra is already the leading manufacturer of electric buses in North America, but also has a business segment that offers electrification technology for other types of commercial vehicles.

Lightning eMotors is in the process of ramping annual vehicle production to 3,000 by 2023, with the first deliveries of the Lightning Electric Transit vans to begin later this year. However, it appears that Amazon is already testing out the new electric delivery vans. This specific vehicle, which you may notice is identical to the one shown above but with a different paint job, is currently operating in the San Diego area.

In GigCapital3's investor presentation from December for the merger, Amazon is shown as a key customer that has already placed orders with Lightning eMotors. As Amazon continues to deploy EVs while Lightning eMotors works to prove itself as a viable partner and supplier, Lightning eMotors and Proterra stand to benefit from the tech juggernaut's sustainability initiative.

Amazon is betting big on EVs

Amazon is working with numerous companies as part of its efforts. The company already placed an order to purchase 100,000 electric delivery vehicles from Rivian, one of the most prominent EV start-ups that is preparing to also launch consumer vehicles later this year. Amazon led a $700 million investment in Rivian in 2019, and the first of its custom EVs was unveiled in October. Those vans hit the road in February, starting in Los Angeles.

The burgeoning partnership with Lightning eMotors is much smaller but still very promising. The company says that all of its key customers combined have ordered around 1,500 vehicles, and that the orders already received should generate its forecast revenue of $63 million for 2021 once those orders are fulfilled.

In addition to Rivian and Lightning eMotors, Amazon is also buying vans from Canada-based Lion Electric, which is merging with SPAC Northern Genesis (NGA). Lion Electric has delivered 10 electric trucks to Amazon as part of a test run, and Lion Electric confirmed in January that Amazon has ordered 2,500 vehicles.

Amazon is pursuing an unstoppable shift to EVs that will require a multiprong approach in the decades to come, and these providers are set to capitalize.

Why GigCapital3 Jumped 14.5% This Morning -- Then Gave Most of It Back