Soaring highs and plummeting lows are familiar territory for investors who have been around Shake Shack (NYSE:SHAK) for a while, even before the novel coronavirus pandemic. As optimism builds that the economy will gradually reopen this year, the restaurant chain's stock is soaring close to all-time highs. Having successfully navigated the health crisis and armed with cash to execute on its aggressive expansion plans, Shake Shack could continue to win this year.

But make no mistake, this is an expensive restaurant stock. I think the positives and negatives cancel each other out, and I'm calling this one a "hold" if you own it already and calling for patience if you don't. Here's why.

Two reasons Shake Shack will be a reopening economy winner

Shake Shacks are notoriously busy stores -- at least they were. Located in busy urban centers (most of them concentrated in the northeastern U.S.), the burger, hot dog, and milkshake chain was one of the hardest hit in the industry by the COVID-19 health crisis.

But Shake Shack has weathered the storm and is starting to recapture some of its industry-leading unit sales averages (average revenue per location). During the fourth quarter of 2020, total revenue was up 4% year over year to $157.5 million owing to a 53rd week in 2020 (compared to 52 in 2019) and 311 restaurants in operation (compared to 275 at the end of 2019). Shack-level operating profit margin was also making a comeback, up to 16% in Q4 versus 20% in the same period of 2019.

What's impressive about the numbers is that a new round of lockdowns was put in place in many areas during the final months of the year. Even so, the company is making progress clawing its way back to its busy pre-pandemic store activity. There's a digital twist here, though. Shake Shack has done a lot of work promoting sales via its app for delivery or pickup and reported about 300% year-over-year growth in digital revenue so far in 2021.

And as Shake Shack starts to lap the initial effects of the pandemic a year ago, financials will have an easy bar to clear and should start showing strong year-over-year growth again. That's great news for the stock. 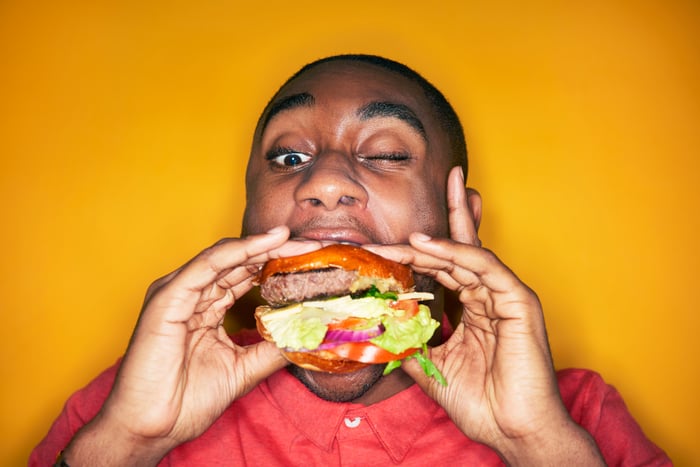 A second reason Shake Shack could continue its run higher is its pipeline for new store openings. Management expects to have 35 to 40 new company-owned stores by the end of 2021, and another 15 to 20 franchised (most of them international). In total, that would represent as much as a 20% increase in the number of stores in operation by the end of this year. Paired with a rally in existing store sales as the economy recovers from effects of the pandemic, this could indeed become a high-flying restaurant chain once more.

Helping it pull off its aggressive expansion is a strong balance sheet with $184 million in cash and equivalents and no debt at the end of the year. Subsequent to the start of the new year, Shake Shack announced it would raise as much as $242 million in fresh cash via convertible debt issuance in March.

One reason shares are headed for a tumble

Armed with an enviable war chest -- especially for a small-ish burger chain -- Shake Shack would appear to be unstoppable. However, shares currently trade for over 8 times trailing 12-month sales, the highest premium it's ever gone for. That metric is even more pricey than it was during the year following the company's initial public offering in 2015, and valuation was silly back then. It's still a steep price tag now that assumes a rapid increase in revenue in the year ahead, and especially considering this chain operates on thin margins. Adjusted EBITDA was just $22.7 million last year, a profit margin of just 4.3%. 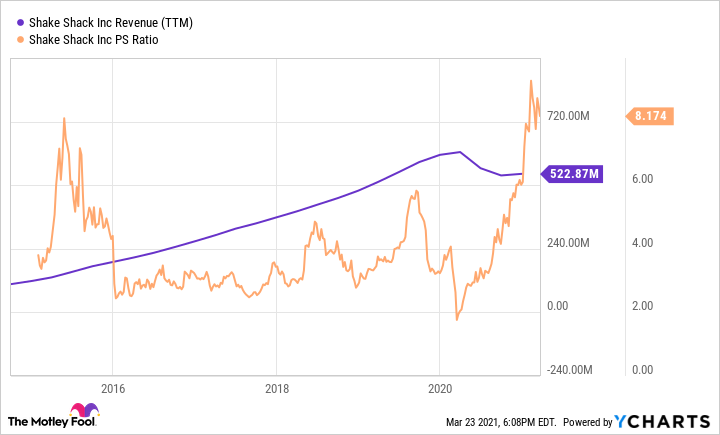 Granted, Shake Shack operates close to breakeven on purpose, using the cash it generates to grow the number of locations it has slinging burgers and icy treats. Nevertheless, valuation may have gotten ahead of itself again, as it frequently has in the past. A correction that brings shares back in line with reality wouldn't be a shocker.

And here's the reality: The economy isn't out of the woods yet, and Shake Shack is starting to expand into markets where its business is brand new -- and those newest Shacks may not do as well as they do on their home turf in the northeastern states.

Thus, I'm recommending investors do some hand sitting right now. I'm not selling my small position, as I think this is still a promising better-burger chain for the long haul, but I'm also not interested in overpaying to add to my position. After the big run-up in price in the last year, patience is likely to be rewarded here.