Please ensure Javascript is enabled for purposes of website accessibility
Log In Help Join The Motley Fool
Free Article Join Over 1 Million Premium Members And Get More In-Depth Stock Guidance and Research
By Billy Duberstein - Mar 28, 2021 at 7:32AM

Which old-school social media stock is the better buy today?

Social media stocks: Love 'em or hate 'em, it's where many eyeballs are going these days. While social media stocks are susceptible to government regulation, thorny privacy and safety issues, and not to mention young upstart challengers, most companies did exceptionally well last year in the pandemic. With the continuing shift to digital advertising, these companies could be in for sustained growth in the years ahead, even when the pandemic subsides.

Social media companies also benefit from powerful network effects, making first-movers hard to displace. So it's not surprising that two "granddads" of social media, Facebook (FB 1.41%) and Twitter (TWTR 3.91%), did well last year. Facebook is up 75% and Twitter is up 140% over the past 12 months, compared with 62% for the S&P 500.

With economies reopening and advertising revenue starting to recover, which is the better stock today? 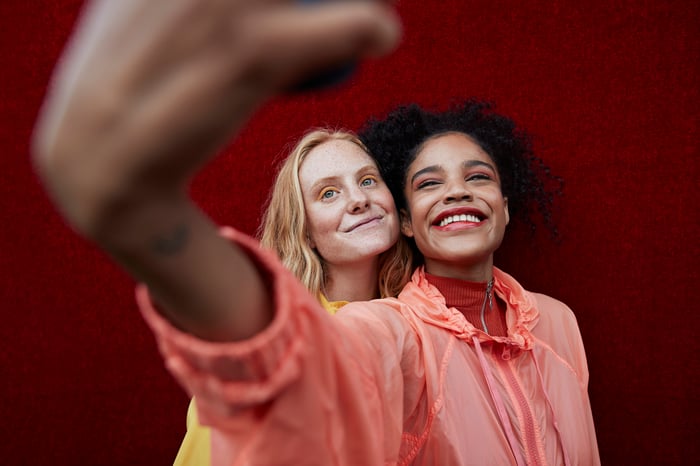 Twitter is up more than Facebook over the past year due to improvements relative to 2019. Still, Facebook clearly has the better overall business as things stand today. During the fourth quarter, here's how the two social networks stacked up on several key metrics.

There's no real question as to which is the better business at this moment: Facebook wins hands-down. Thanks to its unmatched scale, intimate knowledge of customers, highly visual format, and precision targeting capabilities, Facebook is becoming the advertising platform of choice for businesses large and small, and is especially key for small online businesses to reach new customers.

Despite the massive outperformance of the Facebook business, Twitter has been the better stock over the past year. This is likely due to where both stocks started. Facebook is a nearly $800 billion market cap behemoth, while Twitter, even after its big run, only has a market cap of $49 billion.

Twitter's user base also accelerated more than Facebook's, with mDAUs growing 27% in 2020 versus Facebook's 11%. That could lead some to believe Twitter will accelerate its top line, even though it actually lagged Facebook on a revenue growth basis last year.

Twitter has clearly had problems monetizing its platform, but things began to improve throughout 2020. Revenue accelerated throughout the year, exiting Q4 at a 28% revenue growth rate, higher than the 7% it posted for the full year. Within overall revenue, ad revenue growth was an even higher 31%.

With the economy reopening and interest rates going up, things may swing more in favor of more profitable companies in 2021. That bodes well for Facebook, which is still much, much cheaper than Twitter on both a price-to-earnings and price-to-sales basis: 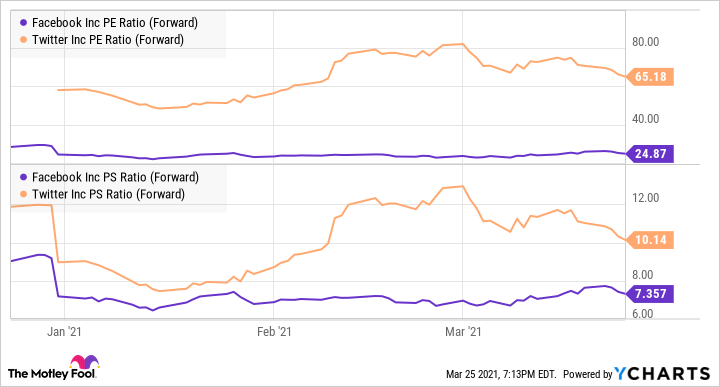 Twitter may also have a hard time generating near-term profits even if its revenue growth holds up, because it's still making some heavy investments. Management forecasts 25% growth "or more" in total expenses in 2021, so Twitter will have to accelerate revenue if it hopes to grow profits at all.

Meanwhile, Facebook should continue to mint profits, which not only affords Facebook the ability to reinvest in its core platform and buy back stock, but also invest in new technologies, setting up its next chapter. For instance, Facebook's Oculus AR platform could be a future growth driver, and the company just unveiled a new wrist-based wearable that could become an AR-based virtual computing platform of the future.

Stay with the safer bet

Whether or not Facebook can make a disruptive breakthrough in augmented reality is still an open question. However, even absent any new business, Facebook's better value and more solid profits stand to hold up better in the rising rate environment than Twitter's hoped-for growth. I'd expect the relative performance of these two companies to reverse in 2021. Today, Facebook's the choice.