Investors are not feeling confident about the growth prospects for the Bowflex maker.

Shares of Nautilus (NLS -6.42%) lost 15% in value last month, according to data provided by S&P Global Market Intelligence.Normally, when companies host an investor-day conference to pitch its long-term growth strategy to analysts, that usually reinforces positive sentiment around a stock, but that wasn't the case with Nautilus last month.

The stock price started to fall around the middle of the month and continued to slide following the company's investor-day presentation on March 18. Apparently, management's outlook calling for revenue to roughly double by fiscal 2026 wasn't enough to please investors, especially with concerns about the potential for more people to leave their at-home fitness equipment gathering dust as people return to their pre-pandemic routines. 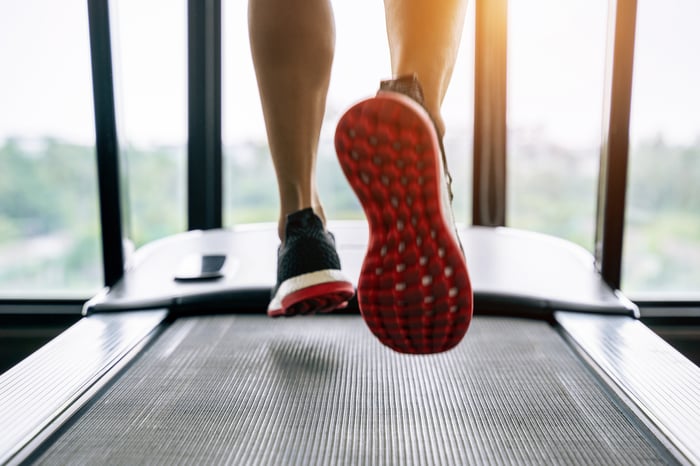 Nautilus has been riding the growth happening across the fitness market during the pandemic. In a year when Nike reported high engagement with its Training Club app, and Apple entered the market with the launch of Fitness+, Nautilus still managed to grow revenue 79% over 2019 -- a sign of how much demand was in the marketplace last year.

Still, investors might be sensing a problem for Nautilus moving forward. In addition to the potential for slowing growth in the near term if more people return to the gym, Nautilus is losing market share to Peloton Interactive (PTON 16.52%) in a wide open market for at-home fitness equipment.

While Peloton saw revenue climb 128% year over year in the most recent quarter, Nautilus reported a lower adjusted growth rate of 108%, excluding the sale of the Octane brand in October 2020. Including the year-ago results of Octane, revenue increased only 82% in the fourth quarter, and this is despite Nautilus having the advantage of growing off a much smaller base of revenue.

Nautilus's forward guidance doesn't give growth investors confidence that it will be able to keep up with the competition, which also includes Lululemon Athletica's fast-growing Mirror platform that the athletic apparel brand acquired last year. Nautilus expects revenue to be up 55% to 75% for the quarter ending in March, which looks weak relative to Peloton's outlook.

Peloton expects revenue to more than double to slightly over $4 billion for its fiscal year ending in June, or roughly five times Nautilus's annual revenue. It looks more problematic for Nautilus that management is forecasting revenue to only reach $1 billion by fiscal 2026. That represents an annualized growth rate of just 10.3% from fiscal 2020's $553 million.

Overall, the lower rate of growth compared to its larger rival, the modest growth outlook over the long term, and the near-term uncertainty on demand following the rollout of vaccines may continue to weigh on the shares this year.