Please ensure Javascript is enabled for purposes of website accessibility
Log In Help Join The Motley Fool
Free Article Join Over 1 Million Premium Members And Get More In-Depth Stock Guidance and Research
By Jason Hawthorne - Apr 11, 2021 at 6:10AM

The pharmacy giant is doubling down on its strengths and paying investors to wait for its transformation.

The pharmacy industry has undergone massive changes in the last few years. The economics of operating a brick-and-mortar business in an increasingly online world along with shifting incentives in the healthcare industry have forced the major brands to come up with a new strategy. One company is betting it can continue being a retail stop in the healthcare journey.

With 21,000 locations in 11 countries, Walgreens Boots Alliance (WBA 2.36%) has been trying to solidify its place as a leader in the new landscape. There are things to be optimistic about. The company has made deals to focus on its stores, and it recently introduced a new CEO with a history of retail success. With the stock down 32% over the past five years, Wall Street seems skeptical about the future. Could a turnaround be on the horizon, or is it time for shareholders to let go? 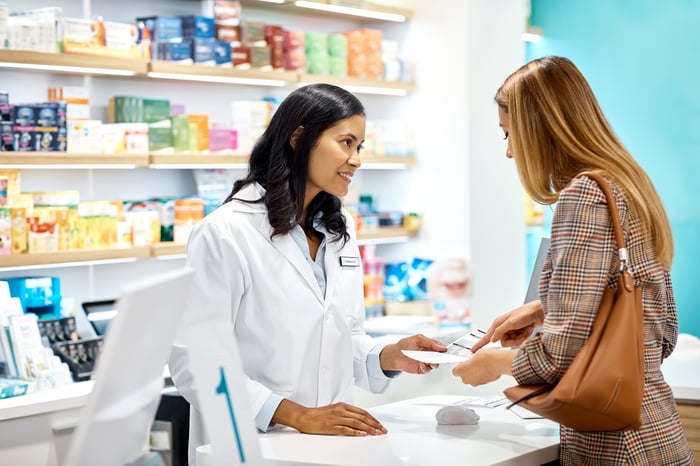 Little has been stable for major pharmacy chains including Walgreens, CVS Health, and Rite Aid for nearly two decades. After watching CVS start its transformation in 2006 with the purchase of Minute Clinic and pharmacy benefits manager Caremark, as well as divvying up regional drugstore chain Eckerd with Rite Aid, Walgreens acquired a 45% stake in multinational pharmacy Alliance Boots in 2012. It bought the rest of the company in 2014. CVS once again took bold action in 2017 in agreeing to buy Aetna, a health insurer, for about $70 billion. That was almost as much as CVS itself was worth at the time.

Without any deals to reshape it, Walgreens' market capitalization, the total value of all outstanding shares, had sunk to $30 billion this past fall. That's close to where it was back in 2012. After it began administering COVID-19 vaccines and agreed to sell wholesaler Alliance Healthcare for $6.5 billion, the stock soared back to pre-pandemic levels and its current $47 billion valuation. Now a new CEO is stepping in from Starbucks to lead the the old-school company into the post-pandemic world.

The company has a three-pronged strategy to keep customers engaged and spending at Walgreens. First, it wants to transform the retail experience. That means offering financial services like credit cards and bank accounts, a new membership program, and embracing online ordering and delivery through Instacart. Second, management wants to leverage technology. One example of this digitalization is the Find Care platform. It's a Walgreens website that allows consumers to start their healthcare journey and find the care they need. Whether it's for mental health or a flu vaccine, the site guides consumers toward getting what they need. Another example is its majority investment in pharmacy automation software provider iA.

The third prong of the strategy is to become a neighborhood health destination. To this end, the company will be opening 500 to 700 full-service in-store doctors' offices. Management is betting the ability to meet so many healthcare needs under one roof will thwart attempts by newer online entrants to cut them out of the healthcare space.

The strategy appears to be gaining traction. In its most recently reported quarter ending Feb. 28, the company posted revenue of $32.8 billion, up 4.6% from the same quarter the year before. That number is on the back of 2% same-store sales growth in the U.S., and in spite of an extremely weak cold and flu season.

Management felt the tailwinds were strong enough to raise the projected full-year earnings growth estimate to mid to high single digits. The growth should give investors confidence in the 3.6% dividend yield. Before the pandemic, Walgreens was only paying out a little more than one-third of earnings as dividends. Any sales growth makes it easier to maintain that payout. Even during the pandemic, the CFO pointed to the company's history of paying a dividend since 1934, making it very clear the policy wouldn't change.

If recent events are any indication, the healthcare industry isn't done changing. Shares of all companies involved in the pharmacy business sank last November when Amazon announced its official entry into the business. The move gives the online retailer a way for customers to compare prices and get their medications delivered without ever leaving home.

Walgreens might be swimming against the online tide, but it is doing so by utilizing its two most valuable assets: its brand and retail footprints. Through its Care Finder platform, it's trying to be a portal to the healthcare experience. Once the journey is started, the company is working to ensure it can meet most of the needs that will arise by offering in-store doctors' offices, using automation to increase the time pharmacists spend performing customer-facing work, and even partnering for online ordering and delivery.

Despite the recent stock run-up, it is still valued near its lowest price-to-sales (P/S) ratio of the past decade. Wall Street may not be confident, but that could give investors an opportunity to buy a solid company in the early stages of a successful turnaround. With a hefty dividend yield, the company is willing to pay shareholders to be patient as its story plays out.