A key factor that's weighed down the tech-heavy index might just have reversed itself.

Some investors have been frustrated about the fact that the Nasdaq has been below its record high levels, even as other major market benchmarks have pushed into uncharted territory over the past week. However, today's gains are taking the index closer to its high-water mark, and one signal from a different part of the financial markets could point toward a sustained upward move for the Nasdaq in the weeks and months to come. 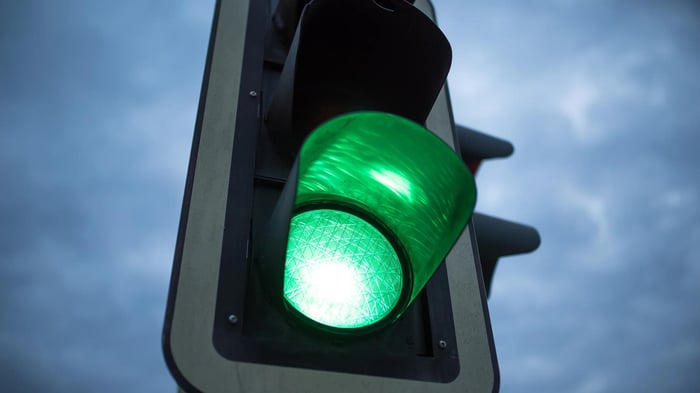 Are interest-rate concerns going away?

The Nasdaq suffered a significant correction in late February and early March, going through a much smaller version of the huge losses it suffered a year earlier at the beginning of the COVID-19 pandemic. At its worst levels, the Nasdaq was down more than 10% from its highs from earlier in 2021.

The culprit at the time was the bond market. Interest rates on long-term bonds had moved up precipitously, with 30-year Treasuries seeing yields jump more than a full percentage point. That caused losses for bondholders, but it also resulted in investors worrying a bit about stocks, in general, and high-growth tech stocks, in particular.

The link between the bond market and the stock market hinged on a couple of things. First, in general, when bond yields are on the rise, it puts pressure on stocks because investors who would usually prefer to invest in bonds but have been forced into the stock market due to low bond yields, suddenly are able to get the income levels they want from fixed-income securities like Treasuries.

Second, many models for valuing stocks use methods that take prevailing interest rates as an input. When interest rates rise, the factor used to discount future earnings gets larger, and the greater discounting depresses the value of those future earnings in terms of current stock value. Many of the high-growth stocks in the Nasdaq have no current earnings and aren't expected to become profitable for years to come, and that makes valuations of years well into the future that much more important for those high-growth stocks.

A big reversal of fortune in the bond market

Thursday brought a big shift in the prevailing sentiment in the bond market. Yields on the 10-year Treasury were down more than a tenth of a percentage point, falling nearly to the 1.5% mark. That might not seem like much, but it's a huge move for the bond market.

Low interest rates support the stock market in several ways. They make it cheaper for companies to get financing through selling bonds, preserving greater profits for shareholders. They also force more investors to buy stocks as a way of generating the income they need from their portfolios.

Perhaps the most interesting thing about today's bond market move is that it comes despite signs of a strong U.S. economy. Retail sales soared during March, and that would ordinarily make investors worried about the Federal Reserve looking to raise interest rates. Instead, market participants seem to believe the Fed will avoid responding with rate hikes, even as the economy strengthens.

If the reason for the drop in high-growth Nasdaq stocks in February was the rise in long-term interest rates, then a rate decline should arguably lead those same stocks back upward. That appears to be what's happening today, and a full-scale reversal of the upward move in bond yields could well send the Nasdaq to record heights and beyond.