Please ensure Javascript is enabled for purposes of website accessibility
Log In Help Join The Motley Fool
Free Article Join Over 1 Million Premium Members And Get More In-Depth Stock Guidance and Research
By Jason Hawthorne - Apr 17, 2021 at 6:20AM

Growth last year was awesome, but there is something to be even more excited about.

Shareholders of Fulgent Genetics (FLGT 1.82%) have been on quite a ride over the past year. The diagnostics company has subjected investors to both euphoria and despair. COVID-19 ushered in an era of testing that propelled shares to huge gains, and the authorization of vaccines convinced Wall Street the boom was behind us.

The numbers looking back have been amazing, but there's one estimate that should give shareholders a lot of optimism about the company's future. 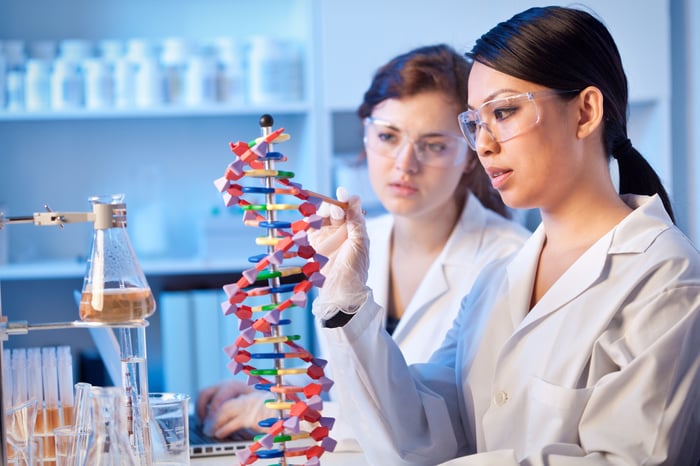 Fulgent's growth is off the charts

As the pandemic took hold and SARS-CoV-2 began to spread, the genetic testing company sprang into action. By mid-May 2020, the company had received authorization from the U.S. Food and Drug Administration (FDA) for its COVID-19 molecular test. The subsequent volume dwarfed everything the company had ever done and revenue followed.

That's not to say the entire business was growing. The company said its core testing business grew in January and February of last year, but volume dropped off as most non-COVID healthcare services were delayed. COVID testing more than made up for the loss. Surprisingly, the non-COVID segment wasn't down for long.

The core business is strong

The arc of non-COVID testing volume in 2020 tells a clear story of resilience about the business. Going further, comparing Fulgent's numbers to genetic testing rival Invitae (NVTA 4.10%) provides a good sense of how well the business performed relative to the industry -- and how 2021 is shaping up.

In the first quarter of 2020, before COVID disrupted the traditional testing operations, both companies were growing quickly. Fulgent reported 75% volume growth while Invitae posted 64%. In the second quarter, both felt the impact. Fulgent's testing volume was flat compared to the first quarter, but Invitae's fell 22%. As the virus waned and some geographies began opening up, both saw a rebound in the third quarter. Billable tests for Fulgent and Invitae were up 57% and 42%, respectively, compared to the prior quarter. For the final quarter of 2020, pent-up demand propelled each to robust year-over-year growth -- 43% for Fulgent and 61% for Invitae. Those are impressive numbers, but there is one that's even more impressive for shareholders of Fulgent Genetics.

Both companies provided guidance for 2021 that show continued expansion. Invitae projects revenue will grow 62% this year to $450 million. However, Fulgent was able to add a little extra fuel to the fire.

Management's estimate of $70 million in revenue for the next-gen sequencing business is 92% more than 2020. That growth could be the most important number for shareholders to pay attention to. The performance is the result of both a fast-growing industry, as well as the company's contract to conduct virus surveillance testing for the U.S. Centers for Disease Control and Prevention (CDC). The deal marrying COVID demand with its core genetic testing is proof that Fulgent has not only weathered the storm of 2020 but has come out stronger.

Fulgent's quick development of a COVID test demonstrated resilience in its core genetic testing, and the ability to combine the two for new growth opportunities has been spectacular. Management now says it can handle 10,000 genetic tests per day. For context, the company performed a little more than 300 per day during the fourth quarter of 2020.

The contract with the CDC isn't the only avenue of new growth. It is also awaiting authorization for a new product that tests for both COVID and influenza and continues to push its at-home testing products. Fulgent also won part of a $2 billion contract with the Department of Homeland Security for COVID testing that it has yet to include in its guidance.

For investors worried about the sustainability of COVID testing, Fulgent Genetics' ability to parlay that demand into new business for its genetic testing should quell some of the fears. Management is showing an ability to innovate for customers that will exist long after COVID testing. That should set the company apart in a fragmented industry and position it as a sought-after partner in 2021 and beyond.