Formally addressing the recent challenges will help to put shareholders at ease again.

In the unlikely event that you haven't heard much about it lately, Johnson & Johnson (JNJ 0.09%) will report its first-quarter earnings before the market opens tomorrow. Investors are bound to be overflowing with questions about the healthcare giant's performance.

Two days after the earnings report, the company will have its annual meeting of shareholders. Whether you're a shareholder or a potential buyer, tuning in will shed light on the future of the company, not just the most recent quarter. In particular, there are a few items that investors should pay close attention to, starting with the company's latest coronavirus vaccine troubles. 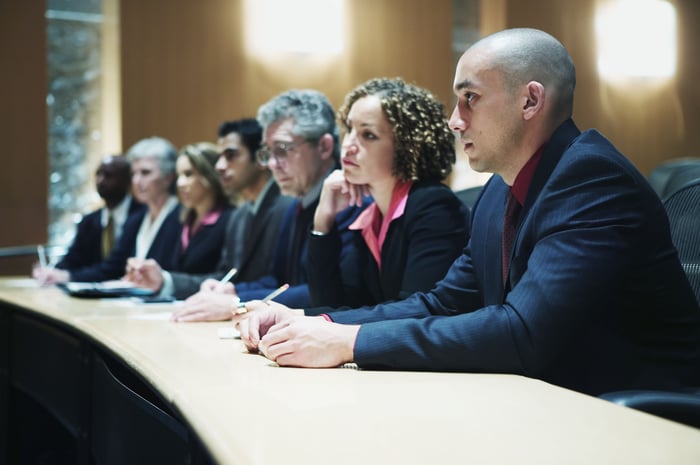 1. When and how will the coronavirus vaccine issues be resolved?

The biggest thing to look for in the earnings report will be any clues about how management is going to handle the latest hitches with the company's vaccine. In late March, manufacturing issues were slated to cause vaccine shipments to drop by 80%. These problems had their origin in a factory run by Emergent BioSolutions, where an accident led to the loss of up to 15 million doses. It's unlikely that such a costly mistake will happen twice, but more clarity on how J&J plans to improve quality control will doubtlessly be on investors' minds.

Then there's the even more recent (and more pressing) problem. After eight recently vaccinated people developed severe blood clotting and one person died, the vaccine's rollout in the U.S. is slamming to a halt at the behest of regulators. Across the Atlantic, the European Commission seems equally displeased at J&J's abrupt announcement that its vaccine deliveries to the E.U. would be delayed until it knew more about the blood clotting issue. So far, the company's response to the problem seems somewhat disorganized, which is very much out of character.

In all likelihood, the one-dose vaccine will return to deployment as soon as regulators understand the scope of the newly revealed risk. According to Janet Woodcock at the Food and Drug Administration, the process could be as quick as "a matter of days." But, investors need to watch the issue carefully, especially with regard to management's plans for a contingency in which the vaccine can't be administered to certain populations due to the clotting hazard. Even a small reduction in its total addressable market could have a significant and negative impact on its expected revenue over the course of a year.

Vaccine woes aside, the company's efficiency will be in focus with the release of its earnings report. While it isn't a cause for alarm, J&J's earnings shrunk by 2.7% in 2020 compared to 2019 even as sales grew by 0.6%. More recently, in the fourth quarter of 2020, earnings plummeted by 56.7% year over year, which might raise a few eyebrows if similarly sized contractions continue into 2021. Some of this drop is attributable to the negative economic impact of the pandemic, but there could be other factors at play. Management is unlikely to address the topic directly, but shareholders may find a few hints nonetheless. 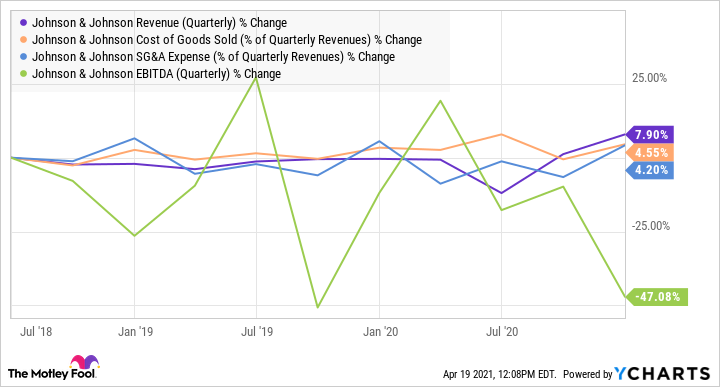 Specifically, investors should keep an eye on the company's cost of goods sold (COGS) as well as its selling, general, and administrative (SG&A) expenses. Both have risen by upwards of 12% over the last three years, but it hasn't stopped J&J's free cash flow from steadily growing in the same period.

In closing, investors and potential buyers should keep in mind that the earnings update is just one bundle of new information. For a multinational corporation of its size, the results of one quarter aren't going to define whether the stock is a good long-term investment. Still, worse-than-expected data could be an excellent opportunity to buy it at a rare discount.