Please ensure Javascript is enabled for purposes of website accessibility
Log In Help Join The Motley Fool
Free Article Join Over 1 Million Premium Members And Get More In-Depth Stock Guidance and Research
By Adam Levine-Weinberg - Apr 20, 2021 at 7:25AM

Macerich (MAC 2.53%) owns some of the best malls in the United States. Its highly productive urban and suburban properties continue to attract desirable tenants, giving them a long-term competitive advantage.

Nevertheless, Macerich entered 2020 with one big weakness: a balance sheet loaded with debt. The COVID-19 pandemic crushed mall traffic and rent collections, exposing this weakness in stark fashion. During 2021, Macerich has been forced to issue a ton of stock -- diluting existing shareholders -- in order to shore up its balance sheet. Let's see what that means for investors going forward.

Macerich's debt load comes back to haunt it

As rent collections plunged last year, Macerich relied on its $1.5 billion revolving credit facility as its main source of liquidity. That approach worked in the short term. However, the facility was set to mature in July 2021, so the mall REIT had to either extend the maturity date or find an alternative source of financing.

As recently as early February, management appeared to be confident that it would be able to renew the line of credit for nearly the same amount. Combined with the roughly $500 million of cash on Macerich's balance sheet at year-end, that would have eliminated any liquidity risk for the REIT.

Unfortunately, Macerich's banks were leery of their exposure to the company, in light of its high leverage and the near-term impact of the pandemic on its cash flow. Moreover, general skepticism about the future of malls made it impractical to line up alternative financing. That forced Macerich to raise new equity in order to reduce its borrowings. 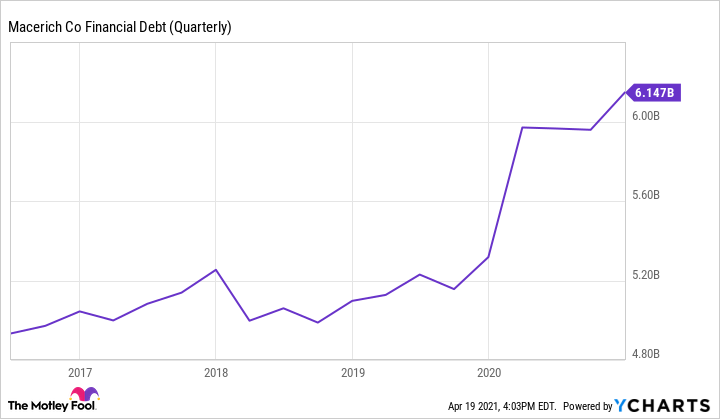 Selling shares to pay down debt

Late last month, Macerich announced that it had sold 36 million shares at a weighted average price of $13.54 per share under an "at-the-market" program, raising $487.3 million. That brought its cash balance to around $950 million, including its share of cash held by joint ventures.

A few days later, Macerich sold a 95% interest in Paradise Valley Mall -- a long-struggling property in Phoenix that has been earmarked for redevelopment for nearly a decade -- netting $95 million.

These moves offset a reduction in Macerich's line of credit to just $700 million when the facility was finally renewed last week. At present, Macerich has drawn $495 million on the new credit facility. That represents a roughly $1 billion reduction in its debt. Following these transactions, the REIT likely has over $200 million of cash on its balance sheet (including its share of joint venture cash), plus $205 million of remaining availability on its new credit facility.

A year ago, Macerich had approximately 152 million shares and equivalents outstanding. However, after issuing about 9 million shares during 2020 as a paid-in-kind dividend and selling roughly 50 million shares last quarter under its at-the-market program, the share count sits at around 211 million. That figure could rise to around 238 million by the end of 2022, assuming Macerich follows through on its plans to issue another $350 million of stock and does so near current prices.

This means that newly issued shares could account for around 36% of Macerich's share count by the end of next year. That dilution will reduce funds from operations (FFO) per share by about a third (after accounting for lower interest expense).

Lower FFO per share will make Macerich stock less valuable. Thus, the pandemic has taught Macerich management -- and shareholders like myself -- a costly lesson about the importance of maintaining a strong balance sheet.

On the other hand, Macerich stock traded at a bargain valuation of around six times adjusted FFO at the beginning of 2020, reflecting investors' concerns about the REIT's balance sheet. By the end of next year, Macerich will have a much stronger balance sheet than it had a year ago. That justifies a significantly higher earnings multiple going forward.

Investors shouldn't expect Macerich stock to rebound to the $50-$60 range where it commonly traded a few years ago. But with FFO likely to surpass $2 per share within a year or two -- despite the recent dilution -- Macerich stock could double or more compared to its recent trading price below $13.