Please ensure Javascript is enabled for purposes of website accessibility
Log In Help Join The Motley Fool
Free Article Join Over 1 Million Premium Members And Get More In-Depth Stock Guidance and Research
By Taylor Carmichael - Apr 27, 2021 at 7:15AM

Multiples have gotten very high in the tech sector. Here are two fast-growing companies that are a lot cheaper.

For investors who aren't optimistic -- or who want to diversify to stay on the safe side -- here are a couple of cheaper names outside the tech sector that nonetheless have impressive growth rates.

Lovesac (LOVE 3.45%), the modular furniture superstar, is trading at three times sales. Meanwhile, revenue jumped 40% in the most recent quarter. And Virtu Financial (VIRT -0.30%) stock is even cheaper, with its price-to-sales ratio of 1.2. Virtu had an amazing 103% revenue growth in its most recent quarter.

Can these comparatively cheaper stocks surprise to the upside? Let's find out. 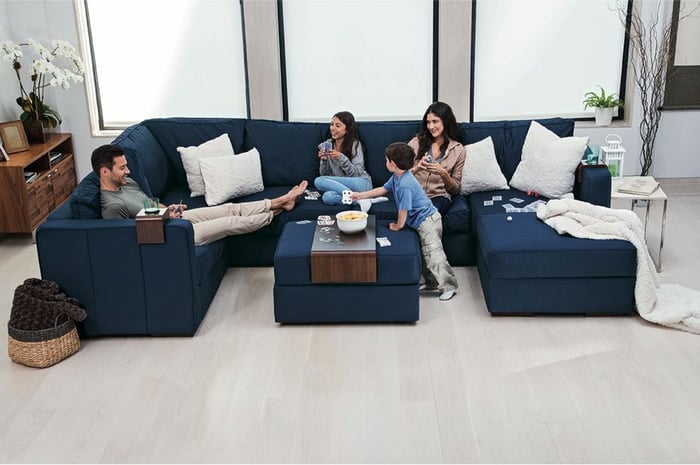 The Sactional sofa is actually a platform technology

One of the nice things about owning a "platform" stock is that it's similar to the razor-and-blades business model. First, you sell the platform, and then customers lock in and make additional purchases that work off the platform. Lovesac's big seller, the Sactional sofa, has that dynamic.

The sofa has two basic pieces: seats and sides. If you're in an apartment you might start with a small loveseat, and then add additional pieces as you move into a house. Customers can buy additional pieces and make the couch bigger. (Or you can divide your couch into two couches.) With a Sactional, you can change your sofa as often as you desire. And the more pieces you own, the more options you have.

Not surprisingly, Lovesac is seeing a lot of repeat customers, which is highly unusual for a furniture company. Thirty-seven percent of transactions are customers buying additional products. This is a useful business model because every customer who is acquired creates more revenue down the road. 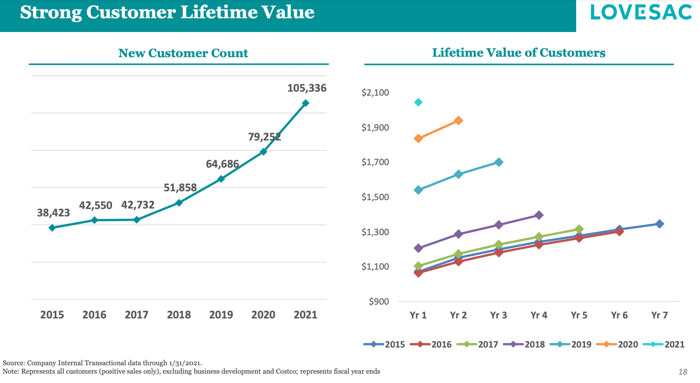 Part of the reason Lovesac is seeing dramatic growth right now is because its modules are smaller and easier to ship. The company reported a dramatic 86% spike in its internet sales last year. And in a highly mobile society, it's wonderful to have sofas that come apart and are easy to move.

This day trader is very safe

Virtu Financial is a market-maker in the stock market. Whenever you buy or sell a stock, it's almost always a market-maker like Virtu on the other side of the trade. Market-makers buy when you're selling, and they sell when you're buying. Every day they offer a price on virtually every stock that trades on the market.

While this might seem incredibly risky to an outsider, it's actually a very safe and profitable business. It's sort of like being the house in a casino. Virtu's super computers track a lot of trades simultaneously, which allows the company to make money on the difference between the buy price and the sell price. And these tiny profits add up to a lot. Last year Virtu made, on an adjusted basis, $9 million in net trading income (NTI) every day. And the company made $2.2 billion in NTI for the whole year. Virtu enjoys 22% profit margins, has over $2 billion in net cash, and grew revenue 103% in the most recent quarter.

Why, then, is the stock so cheap? One reason is that Virtu's revenue is expected to decline over the next couple of quarters. That's because last year the company had an unexpected windfall when the stock market crashed hard because of pandemic-related lockdowns, and then bounced right back. Trading volumes soared. And the more the stock market trades, the more money Virtu makes.

While this conservative estimate is understandable, it's also unreliable. We simply don't know what kind of volatility 2021 has in store for the stock market. There could easily be another crash this year, or a wild spike upwards, or just plain volatility for a period.

While many investors consider volatility to be synonymous with risk, in Virtu's case the opposite is true. The wilder the stock market behaves, the more money Virtu makes. So Virtu is a safe way to protect your dollars amid market volatility.

There's another reason I'm bullish about Virtu's business: free trading. In late 2019, Charles Schwab reduced its trading commissions to $0. Several other brokerages quickly followed. So while some of the trading spike was due to the lockdown (and thus temporary), I also believe that free trades -- along with the increased popularity of fractional trades -- played a significant role in the increase. That free-trade price suggests that elevated trading levels are here to stay. I am a long-term bull on the stock market, and I think it's still the best vehicle for creating wealth known to man. But I also think there will be significant ups and downs along the way. And Virtu will profit from all this increased volatility.

Investors who are worried about a market crash really ought to consider parking some dollars in Virtu. The company offers a 3% dividend, and it's also buying its own shares. I believe both Virtu and Lovesac will both surprise to the upside in 2021.

Why Lovesac Plunged 20% in May