Please ensure Javascript is enabled for purposes of website accessibility
Log In Help Join The Motley Fool
Free Article Join Over 1 Million Premium Members And Get More In-Depth Stock Guidance and Research
By Taylor Carmichael - Apr 29, 2021 at 8:30AM

eXp World has almost $2 billion in annual revenue and it's growing that number by 100%.

eXp World Holdings (EXPI 6.88%) is my favorite stock in the real estate sector and one of my favorite internet companies. I believe this company is going to be the Amazon of real estate sales, like Carvana is in the world of auto retail.

The real estate market is huge. Over $2 trillion worth of buildings and land were bought and sold around the world last year. If we assume a 5% commission rate, then the global market for real estate sales is a $100 billion opportunity. Several companies, including Zillow Group (Z 6.05%) (ZG 6.26%) and Opendoor Technologies (OPEN 8.49%) are seeking to dominate this market and become the Amazon of real estate.

And there's a bifurcation here. On the one hand, Zillow and Opendoor are trying to eliminate the need for brokers in the real estate market. Meanwhile, eXp World is going in the completely opposite direction and is using the internet to empower brokers and help drive their business forward.

Who will prevail? It's perhaps too early to say. But so far, the numbers suggest that eXp World is running away with it. 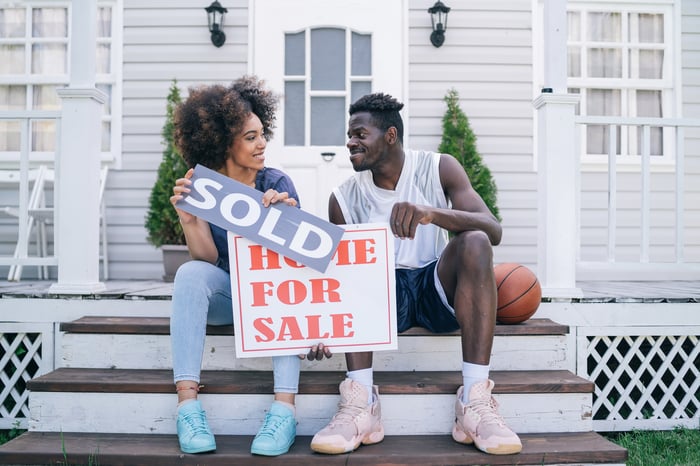 Every year eXp dramatically increases its number of brokers. Each and every one of these brokers is an entrepreneur, responsible for their own business. Housing is a local market with a lot of variables. So by bringing more and more brokers under its banner, eXp is dramatically expanding its worldwide business.

eXp World has virtual offices in the U.S., the U.K., Canada, Australia, South Africa, India, Mexico, Portugal, France, Puerto Rico, Brazil, Italy, and Hong Kong. It's adding Spain, Israel, and Columbia in the second quarter. And this is truly a virtual model. Unlike Amazon, eXp doesn't have to ship anything. It doesn't need distribution or warehouses. By adding brokers in foreign lands, eXp is adding local knowledge to its virtual tools. This has been a dynamite combination, and it has allowed the company to grow quickly.

As founder and CEO Glenn Sanford said on the fourth-quarter conference call: "When I look at the model right now, my thought is domestically we should be growing somewhere around 60% to 70% this year. And ... internationally, we're going to grow really exponentially, because there's a much smaller number of agents, but the value prop is really matching up well in these different countries."

The fourth-quarter numbers for eXp were remarkable, with revenue jumping 122% to over $600 million. The company is also profitable, making $7.7 million for the quarter, up from less than $1 million a year ago. Contrast those numbers with what Zillow or Opendoor produced. Zillow's revenue dropped 16% in Q4. Opendoor's crash was even more dramatic, as sales plunged 80% in the fourth quarter.

Of course, 2020 was the year of COVID-19 and the lockdown, and a lot of companies reported horrible numbers. But that wasn't really the case in the internet sector. Many internet companies thrived last year, as shutdowns sent more and more business that way. You might expect the real estate market to thrive online, and that was the case with eXp. Yet Opendoor and Zillow disappointed.

This suggests there may be some hidden costs to the iBuyer model, and consumers are not flocking to the quick-and-easy option of selling a house without an agent. According to Sanford, that's exactly what's going on. In a Facebook post back in February, he argued that "consumers paid in general 11.5% commissions and expenses to Zillow vs. an average of 5.4% when an agent lists and sells a home." Sanford shared his math on a public spreadsheet.

Of course, many consumers are in a hurry and want a fast price, not necessarily the best price. But the disparity in growth rates certainly suggests that eXp saw a lot of market demand last year, while the iBuyers saw their numbers go in the opposite direction.

And the stock is cheap

eXp World currently trades for three times sales. That's remarkably cheap given its triple-digit percentage revenue growth. Zillow has a price-to-sales ratio of nine. And both of these companies are a lot cheaper than tech stocks like Zoom Video Communications, at 38 times sales, or Snowflake at 56 times sales.

There are reasons that the stock market loves tech stocks so much. Software-as-a-service (SaaS) companies have subscribers, and customers lock in. And so the market has a lot of faith in future revenue streams. In the real estate market, you might buy a house once and not talk to a realtor for 20 or 30 years. Nobody is locked in and future revenue is unpredictable.

On the other hand, eXp World has a fascinating subsidiary, Virbela, which it acquired in 2018. This acquisition has made eXp World a rising leader in providing virtual reality capabilities for workforces and universities. Subscribing to Virbela gives a company a virtual world where employees can meet, host events, and hold classes in a 3D environment. Such an environment is very handy when you have 48,000 real estate agents around the world.

Interest in Virbela has spiked because of COVID-19. "It's probably accelerated by at least 10 years just because of what took place with COVID-19," Sanford said on the third-quarter conference call. He mentioned, "One company that we're currently building out a large campus has over 30,000 employees and [we] expect at least half of them to be using Virbela as their primary way to go to work."

So while eXp World is primarily a virtual realtor right now, the company has a lot of optionality. And it's very exciting to find such a rapidly growing internet company with such a cheap stock price. This under-the-radar name probably won't stay unknown for long.

Should You Buy This Company That Crushed Estimates?