Please ensure Javascript is enabled for purposes of website accessibility
Log In Help Join The Motley Fool
Free Article Join Over 1 Million Premium Members And Get More In-Depth Stock Guidance and Research
By Rich Duprey - May 3, 2021 at 3:38PM

These three stocks are under lock and key because I expect big things from them in the future.

I've fully bought into the Warren Buffett axiom of "the best time to sell a stock is never," but as we also all know, never say never. After all, even the Oracle of Omaha routinely sells stocks he owns.

While breaking the day-trading mindset is obviously the goal of such pithy sayings, holding onto shares for years, decades even, is the preferred time horizon and what I'm planning to do with the stocks in my portfolio.

However, with the three stocks below, I plan on never selling them because they have proven to be successful businesses with staying power and competitive advantages that will keep them well ahead of their rivals far into the future. 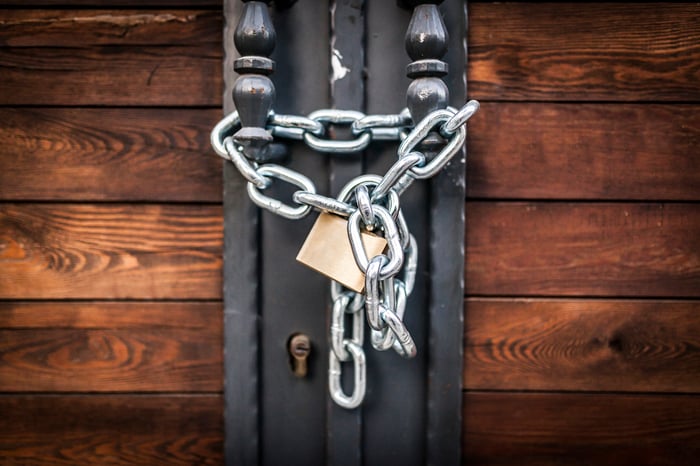 The "rule of threes" is critical for survival: You can survive for three minutes without air, three days without water, and three weeks without food. While Mark Twain once remarked, "Buy land, they're not making it anymore," water is an even more scarce resource, and American States Water (AWR -0.20%) is tasked with mostly providing Southern California with clean water and electricity.

Water generation makes up the lion's share of its business, representing over two-thirds of American States' operating revenue in 2020, but another 25% comes from providing military installations around the country with water as well, and those are under long-term, 50-year contracts. Electricity makes up the rest of its revenue.

That allows American States Water to provide significant stability to investors. While it might not generate especially exciting capital appreciation, it makes up for it with steady dividend growth.

The water utility has paid dividends for over 81 consecutive years and has increased the payouts each year for 66 years. That puts it among an elite group of stocks known as Dividend Kings, which are companies that have raised their dividend payments for 50 years or more. The surety of its payout may be one reason you will never want to sell American States Water stock either.

The strength of Colgate-Palmolive (CL 1.16%) is found in its portfolio of name brand consumer products -- everything from its leading toothpaste and dish washing liquids to Ajax, Murphy Oil, and Tom's of Maine. These are essential consumer and household goods people naturally reach for in good times and bad.

There's comfort in knowing a product will perform time and again, and that legacy extends internationally where Colgate derives some 70% of its revenue and where it also has leading brands in most categories.

Yet many investors turn to Colgate-Palmolive because of its enviable record in paying a dividend. It made its first payout in 1895 and never stopped, and then began increasing the dividend every year beginning in 1963, meaning for nearly 60 years investors could count on a rising stream of income from the consumer products giant.

A stellar track record, a solid financial base, and a global reach are just some of the reasons why Colgate is a fixture in my portfolio.

Due to innovations in the oil and gas industry and massive new fields discovered, the dire predictions of so-called "peak oil" have largely faded from the headlines, but the global pandemic revealed the ways in which industry majors like ExxonMobil (XOM -0.93%) are still vulnerable.

That it took nearly all the world's governments virtually closing down their economies to weaken the oil and gas giant, however, shows just how enduring its business really is. There may be a movement toward greener energy, but fossil fuel demand is going to be a key component of our everyday life for decades to come.

Still, Exxon is going to be a slimmer operation than it was in years past. Cost-cutting measures rule the day in an effort to rein in the significant mountain of debt it has accumulated from its capital intensive exploration and development projects. Low oil prices caused it to shelve most initiatives for the time being, but as economies reopen and demand is reignited, higher pricing will help alleviate the concerns many hold about its ability to meet its obligations.

One of those is its dividend. Unlike other oil majors, Exxon maintained that not cutting it was an imperative. 2020 was the first time in 18 years it did not raise the payout. However, because dividends for the calendar year were higher than the prior year, the company continues to be considered a Dividend Aristocrat as it has been for nearly four decades.

I'm betting ExxonMobil is going to be around a lot longer than most green-tinted companies that are trying to supplant it, and I plan to hang on for the long term.