Please ensure Javascript is enabled for purposes of website accessibility
Log In Help Join The Motley Fool
Free Article Join Over 1 Million Premium Members And Get More In-Depth Stock Guidance and Research
By Rich Duprey - May 3, 2021 at 5:30AM

It's a lot of money, but the cruise line has a lot of bills, too.

The U.S. Centers for Disease Control's decision to allow cruise ships to resume sailing by mid-July comes at just the right time for Royal Caribbean (RCL 1.09%), which just reported a $1.1 billion adjusted loss for the first quarter.

While no one expected the cruise line operator to really do any better, it can only survive so long producing billion-dollar losses quarter after quarter. The real benefit, though, is that the resumption of voyages comes as Royal Caribbean has accumulated a large stash of cash.

With $5.1 billion in the bank (but $20.7 billion in debt to go with it), the cruise ship owner looks like it has the financial means available to finish riding out this storm. 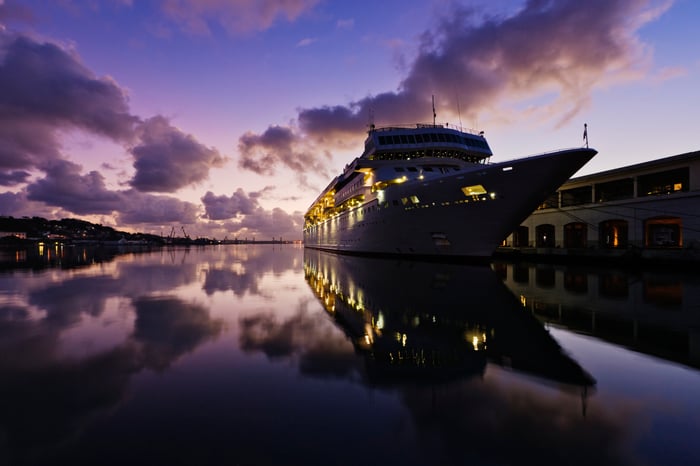 Year-over-year comparisons are pretty useless for the cruise industry since it hasn't been operational since voluntarily suspending business last March.

Yet for some metrics Royal Caribbean can look back to 2019 to see how its current business matches up, and there's good reason to believe it can come back stronger.

Booking activity for the back half of the current year is in line with what management expected. While the numbers of passengers isn't going to be the same, the cruise operator is seeing the pricing on those bookings running at higher rates, even when factoring in the impact for credits on future voyages for passengers whose cruises were cancelled by the pandemic.

Looking further out into the first half of 2022, advanced bookings are running within historical ranges, but at prices higher than they were in 2019. Underscoring the strong latent demand for cruises that still exists, Royal Caribbean says it was able to achieve this without having to expend much in the way of marketing.

That's why its cash horde is so important. Obviously, it didn't amass that amount without cost. As noted, Royal Caribbean took on a substantial amount of debt to reach that level, a total of $12.3 billion since March 2020.

Yet just in the first quarter, it continued to raise cash by issuing $1.5 billion of 5.5% senior unsecured notes due in 2028 and used the proceeds to pay off debt that was maturing this year and next. It also extended by 18 months the maturity date of a $1 billion term loan that was coming due next April, and paid off the principal on the note while extending or amending other debt covenants that leave it in better financial shape until it can start sailing again.

And because the market has remained bullish on the long-term prospects for Royal Caribbean, its stock has soared over the past year, quadrupling in value since the onset of the pandemic last March.

The cruise operator took advantage of that, too, by completing a $1.5 billion equity offering at a price of $91 per share.

It costs money to go nowhere

So where is Royal Caribbean going to spend its billions? Just keeping its ships in port costs money, and it estimated its cash burn rate was running between $250 million and $290 million a month.

Now that it's going back to sailing -- and had begun preparations for sailing from international ports before the CDC granted permission to sail out of U.S. ports -- the costs don't go away, but actually rise.

It expects its capital expenditures to be $1.1 billion for the rest of the year, and having taken possession of a new vessel in the first quarter and expecting to bring in a second one in the fourth (plus two new scheduled deliveries in 2022), it's going to see its expenses rise further, though it says it can't make an estimate right now on the amount.

It also needs to service the debt it took on, though the actions it made on financing help it immensely. It sees $200 million in debt maturities for the remainder of this year and $2.2 billion for all of 2022.

However, taking on passengers again means it can start generating revenue again, which is why Executive VP and CFO Jason Liberty said Royal Caribbean was "eager for the flywheel to start turning again." More sailing opportunities means the cruise operator's cash flow from operations will improve sequentially.

The $5 billion in cash Royal Caribbean has in the bank isn't going to sit there collecting interest, but rather will be deployed to generate a full head of steam. It also won't be used to buy back stock or pay dividends. One of the debt restructurings it did prohibits such uses of its cash until late 2022.

Still, the windfall from its financial maneuvers means Royal Caribbean ought to come out on the other side of this global calamity in fine shape, and investor patience with this leisure stock will be rewarded.