Please ensure Javascript is enabled for purposes of website accessibility
Log In Help Join The Motley Fool
Free Article Join Over 1 Million Premium Members And Get More In-Depth Stock Guidance and Research
By Royston Yang – May 5, 2021 at 10:29AM

The chicken wing chain reported a sparkling set of earnings and announced its expansion into Canada.

Shares of Wingstop (WING -3.35%) jumped 24.6% in April, according to data provided by S&P Global Market Intelligence.

The chicken wing restaurant chain's stock has done well over the past year, but it lost ground in February and early March. Now, however, it is trading close to the all-time high it achieved back in early February. 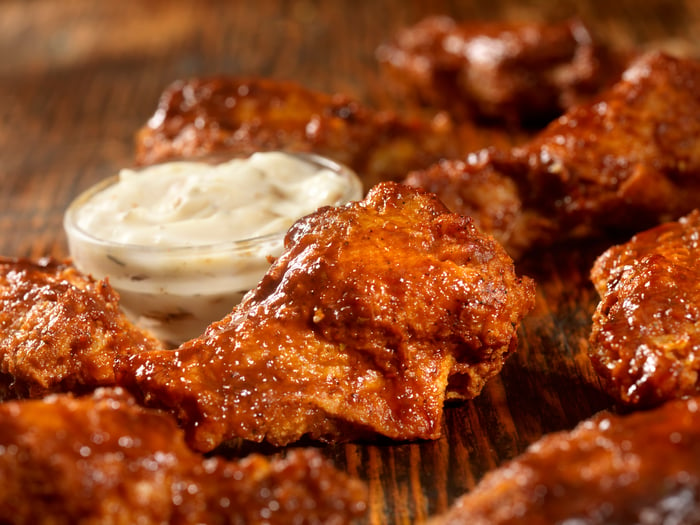 Wingstop continued its recent pattern of strong growth in its fiscal first quarter, which ended March 27. According to the quarterly report the company delivered on April 28, sales jumped by 30% year over year to $558.9 million, while domestic same-store sales increased by 20.7%. Wingstop's pivot to increase its online sales is also bearing fruit: Digital sales made up 63.6% of total sales in Q1, up from 43.3% a year prior. The company opened 41 restaurants in Q1 to end the period with a total of 1,579 worldwide.

Wingstop has achieved consistent growth over the years, and now, it is forging ahead with its global expansion plans. On April 27, it announced an agreement with JPK Capital to open 100 Wingstop locations in Canada over the next 10 years. The first of these stores will be situated in Toronto and is slated to open in 2022. Management's outlook for the rest of 2021 remains sanguine, with guidance for same-store sales growth in the mid-single-digit percentage range.

This latest news about the chain's expansion plans is in line with what Wingstop announced at its 2020 Investor Day. The goal the company stated then was to eventually have more than 6,000 global locations. Currently, 90% of stores are located in the U.S., but over the long term, it hopes to have equal numbers of domestic and international locations.