Please ensure Javascript is enabled for purposes of website accessibility
Log In Help Join The Motley Fool
Free Article Join Over 1 Million Premium Members And Get More In-Depth Stock Guidance and Research
By Dan Caplinger - May 6, 2021 at 4:52PM

Find out which companies delivered strong returns for shareholders.

Thursday was another volatile day on Wall Street, but everything turned out well in the end. Some concerns about growth-oriented stocks led to some declines early in the trading session. Later in the day, however, investors seemed to catch their second wind. That ended up pushing some major market benchmarks into record territory and helped all of them recover from their losses.

With many of the most successful stocks over the past year succumbing to volatility, some of today's biggest winners were surprising. You wouldn't necessarily expect to find Kellogg (K 0.07%) or Iron Mountain (IRM -0.71%) on a list of top performers, but they were among the best stocks in the S&P 500 (^GSPC 0.19%) by the end of the day on Thursday.

Stock markets finished the day with modest gains, and that was enough to send the Dow Jones Industrial Average (^DJI 0.71%) to another closing record high. The S&P 500 fell just short of its high-water mark but finished above 4,200, while the Nasdaq Composite (^IXIC -0.19%) was fortunate to claw its way back into positive territory.

Shares of Kellogg finished the day up more than 7%. That's a pretty big jump for the cereal maker, but investors were pleased with what the food company said in its most recent quarterly earnings report.

Kellogg's numbers from the first quarter of 2021 showed the steady progress the company has seen lately. Revenue climbed 5% on a 4.2% rise in organic net sales. Kellogg said that packaged food demand was extremely high for the period, offsetting relatively weaker performance from its on-the-go and away-from-home products. Adjusted earnings delivered a solid 12% rise year over year, coming in at $1.11 per share. 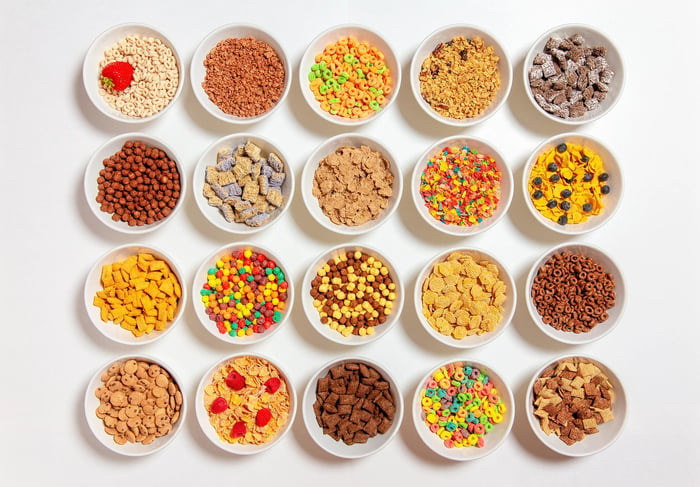 Kellogg has global scope, and the company's European and Asia-Pacific regions delivered double-digit percentage gains. That helped make up for slower growth in the Americas, although operating profit gains were actually highest in the Latin America segment.

Best of all, Kellogg raised its guidance for the full year, now expecting flat organic sales and a modest 1% to 2% rise in currency-adjusted earnings per share. That might not sound like much, but in a tough environment, it was enough to reassure shareholders about the food company's longer-term prospects.

Iron Mountain reported revenue growth of 1% for the first quarter of 2021, as gains in its storage rental segment offset sales declines for its services division. Net income was down 28% year over year, but the more useful adjusted funds from operations that REITs typically use climbed 2% to $0.81 per share.

The interesting thing about Iron Mountain is that it's bringing the digital and physical worlds together with its business. The company has long specialized in storing paperwork that companies are required to retain, but as more document handling gets digitized, Iron Mountain has moved into data centers for digital storage as well.

Shareholders were pleased with Iron Mountain's results, and they also have to be happy about the REIT's dividend yield, which is currently above 6%. Iron Mountain offers a nice combination of cash generation and growth opportunities that could make it a leading contender in a competitive space well into the future.

J.C. Penney's Been a Survivor Before