Please ensure Javascript is enabled for purposes of website accessibility
Log In Help Join The Motley Fool
Free Article Join Over 1 Million Premium Members And Get More In-Depth Stock Guidance and Research
By Rich Duprey - May 7, 2021 at 8:27PM

There's no let up in demand for firearms, which is leading to bigger payouts. Here's why.

Sturm, Ruger (RGR 0.71%) continues to benefit from the record-setting pace of firearms sales being set this year as first-quarter revenue surged 49% year over year and profits rocketed nearly 150% higher.

That translated into the gunmaker's dividend more than doubling from the year-ago period, but don't expect that kind of payout to last. Still, it shows how good things are currently for the firearms industry, and the good times are likely to last for quite a while yet. 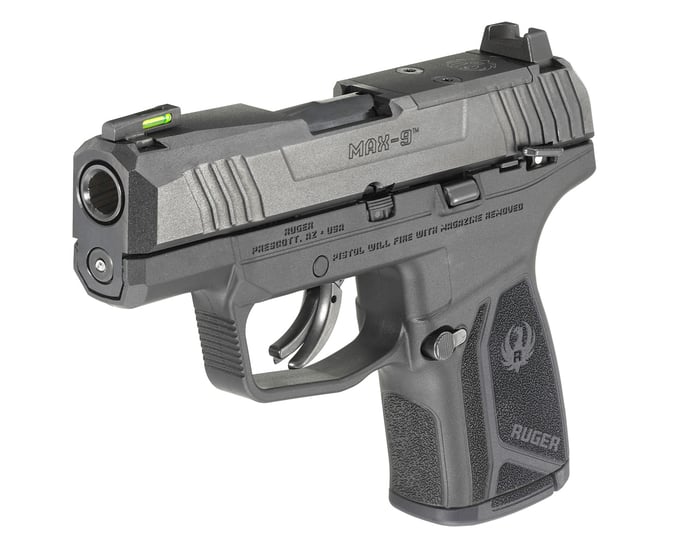 The FBI is on track to break all records this year on the number of background checks it conducts on potential gun buyers, which is translating into manufacturers like Ruger and Smith & Wesson Brands (Nasdaq: SWBI) seeing white-hot sales growth.

Ruger reported net sales of $184.4 million, which easily surpassed estimates of $161.5 million. Although it's not a closely followed stock as just two analysts track the company, the gunmaker was able to easily blow past their forecasts.

Earnings were also an easy beat, with profits of $2.16 per share trouncing Wall Street's expectations of $1.43 per share but also well ahead of last year's $0.87 per-share result.

That led the gunmaker to declare a quarterly dividend of $0.86 per share, well over twice the $0.35 per-share payout it made last year. Although significant, and good news for Ruger and investors, it's not exactly what it seems.

Unlike many companies that pay a fixed dividend every quarter, Ruger's payout is based on a percentage of earnings, or about 40% of net income. So its dividend is different every quarter; while boom times like the firearms industry is currently experiencing are resulting in this big jump, next quarter the dividend could be lower. It may be higher too, but it undoubtedly won't be the same.

The tip of the spear

Ruger saw unit sell-through from independent distributors to retailers rise 9% year over year, though adjusted background checks rose 13%. While the increase is a result of sustained demand the industry is experiencing, it also means inventory has been constrained.

The National Shooting Sports Foundation (NSSF) takes the raw data published by the FBI on the number of checks it performs. Then it adjusts the data to remove things like duplicate checks on gun owners who hold permits to carry a concealed weapon to ensure they're still eligible to have one. That necessarily reduces the total number. 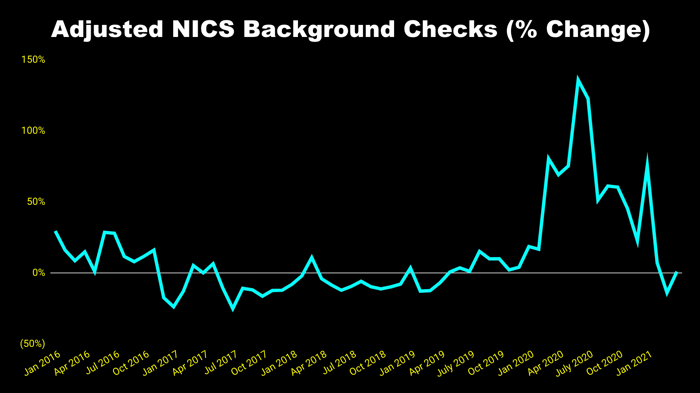 Where the FBI says it has conducted nearly 16 million background checks through its National Instant Criminal Background Check System (NICS), the NSSF says it's really closer to 7.2 million because of the adjustments it makes.

Even so, both figures point to record-high numbers of potential gun buyers. Neither number is a one-to-one ratio of background checks to gun sales since someone might be rejected or buy more than one firearm or none at all. But it's still a close approximation to consumer demand for firearms.

Last year was a record year because of all the rioting and civil unrest that was occurring across the country. Sales might now be motivated more out of fear of greater restrictions on gun ownership, which Biden's executive actions suggest will be coming.

Regardless of the reason, personal safety is a key reason why 40% of all guns purchased last year were by first-time buyers. It's also why Ruger's new Max-9 pistol was such a big seller. Light and compact, it's a good choice for a concealed carry weapon.

New product introductions are a key driver of sales for Ruger and represented 21% of revenue. It plans on marketing more new firearms this year, including reintroducing the Marlin brand of lever-action rifles beginning in the fourth quarter. Ruger acquired Marlin last year following the bankruptcy and liquidation of Remington Outdoor.

The payout clock is ticking

With firearms demand at a fever pitch and Ruger working nonstop to meet demand, there's a good chance the gunmaker's dividend will continue to be at an elevated level. Yet as the three-year drought on gun sales that occurred during President Trump's administration showed, those good times can dry up really fast.

Investors, though, aren't expecting that to happen again anytime soon. Nevertheless, they should enjoy the good times while they last.