Please ensure Javascript is enabled for purposes of website accessibility
Log In Help Join The Motley Fool
Free Article Join Over 1 Million Premium Members And Get More In-Depth Stock Guidance and Research
By Nicholas Rossolillo, Anders Bylund, and Billy Duberstein - May 16, 2021 at 7:00AM

These companies' stocks have bucked the trend and are holding on to their gains.

The last couple months have not been kind to high-growth tech stocks. After rising double- or triple-digit percentages last year, many of them have given back gains and are down big from all-time highs -- some by 50% or more.

Not all tech has fared so badly, though. Three stocks that have actually held strong amid the market's recent bout of volatility are Intuitive Surgical (ISRG -1.69%), Nokia (NOK 0.88%), and Lumen Technologies (LUMN 2.12%). Here's why three Fool.com contributors think they deserve your attention.

A healthcare technologist pioneer and economic reopening play in one

Nicholas Rossolillo (Intuitive Surgical): Shares of Intuitive Surgical are up nearly 60% over the last trailing 12 months. Unlike many tech names, its first-quarter 2021 report was actually a positive catalyst for shares -- helping Intuitive quickly rally following a brief pullback in March.

The reason? This is the leader in robotic-assisted surgery, and there's still massive potential growth for the company as it expands the number of its da Vinci surgery systems around the world. Plus, as many procedures were put on hold last spring and summer during the start of the pandemic, Intuitive is getting ready to lap depressed financial results the next couple of quarters. This could help the stock perform better than many of its tech peers during volatile times.

As for the financial numbers specifically, revenue increased 18% year over year to $1.29 billion, and adjusted net income was up 32% to $427 million -- good for an adjusted net profit margin of 33%. The number of da Vinci machines in operation increased 8% during the period and was at 6,142 worldwide at the end of March. This is an important number to watch since the higher the installed base of robotic surgery systems, the more Intuitive will sell instruments and accessories for ongoing use. Management expects procedure growth to be up 22% to 26% for full-year 2021 (which historically means revenue will rise a similar amount) and for profit margin to rebound from last year. 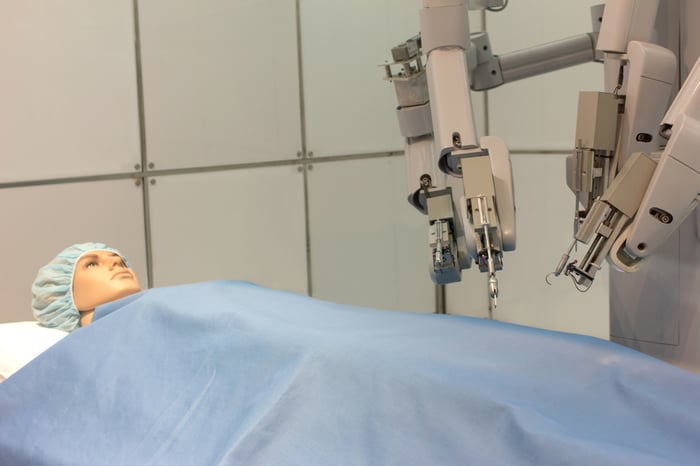 An industry leader in the bargain bin

Anders Bylund (Nokia): Few tech stocks have weathered the recent market storm quite like Finnish telecom infrastructure veteran Nokia. The stock has gained 32% since the New Year, including a 14% jump over the last 30 days. By contrast, the tech-heavy Nasdaq Composite Index is trading flat in 2021 and fell 7% in the last month.

This stock may feel like a joke due to the recent influx of Nokia interest from the Reddit-based WallStreetBets group, but that's just a coincidence. Nokia's real-world business prospects are solid and the stock is actually undervalued, even though it dodged the tech-stock market correction in recent months.

Nokia's solid market position was built on a foundation of 5G network installations. Top-line sales are rising faster than expected, Nokia's profit margin is expanding as we speak thanks to the richer product mix, and the stock is changing hands for less than eight times free cash flow. You don't see that combination of deep-discount stock prices and robust business trends very often, and that makes Nokia a no-brainer buy right now.

Billy Duberstein (Lumen Technologies): Deep-value telecom stock Lumen Technologies has actually increased 8.4% over the past month, even as technology stocks more broadly have been hammered: 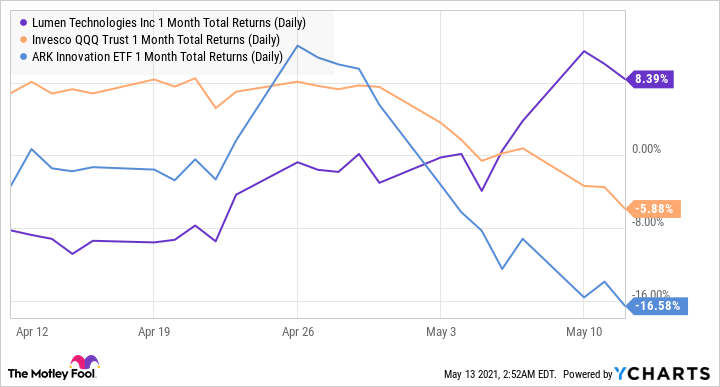 So, what's going on here? Two things. One, in contrast to much of the tech sector, Lumen was a beaten-down value stock heading into the current period, in which value stocks have held up while high-multiple growth stocks have declined on fears over higher interest rates. Second, Lumen recently reported first-quarter earnings. While the overall numbers weren't anything to write home about, there were green shoots in certain segments that could have led to hope for a turnaround in this cheap stock.

In the first quarter, revenue fell 3.8% year over year, but adjusted EBITDA fell only 2% as margin expanded. Given these declines, why did the stock increase? Well, this was the first quarter in which Lumen disclosed new segment reporting, showing a revenue breakdown not only by customer type (enterprise vs. wholesale vs. consumer), but by product as well.

That product breakdown perhaps encouraged investors. Lumen's fiber-based products grew year-over-year across all channels. Although declines in voice-based landline phone services outweighed the fiber gains, most investors realize that landline voice services are in decline. So, to see newer technologies growing may have led some to believe Lumen's declining top line will eventually stabilize and turn around. Meanwhile, the fact that adjusted EBITDA margin is growing means newer services could come with higher margin as well.

In addition, CEO Jeff Storey said on the conference call with analysts that Lumen was now "discussing" the possibility of share buybacks. While nothing was confirmed, and Lumen is still paying down debt, Storey seemed to indicate that once the leverage target of 2.75-3.25 EBITDA is achieved, buybacks are a possibility. Lumen has a fair amount of debt, but its stock only trades for 5.3 times its expected 2021 free cash flow. That's really cheap, so the prospect of buybacks may have enticed some investors as well.

At any rate, the combination of hopeful earnings as well as Lumen's bargain-basement valuation likely kept it afloat, even as other high-multiple tech stocks plummeted in April and May.