Please ensure Javascript is enabled for purposes of website accessibility
Log In Help Join The Motley Fool
Free Article Join Over 1 Million Premium Members And Get More In-Depth Stock Guidance and Research
By Lawrence Rothman, CFA - May 21, 2021 at 10:30AM

These companies draw people in, but only one is worthy of your investment dollars.

That's in the past, of course. Investing is about the future. Each is at a different stage in its development, but which company provides a better return opportunity? 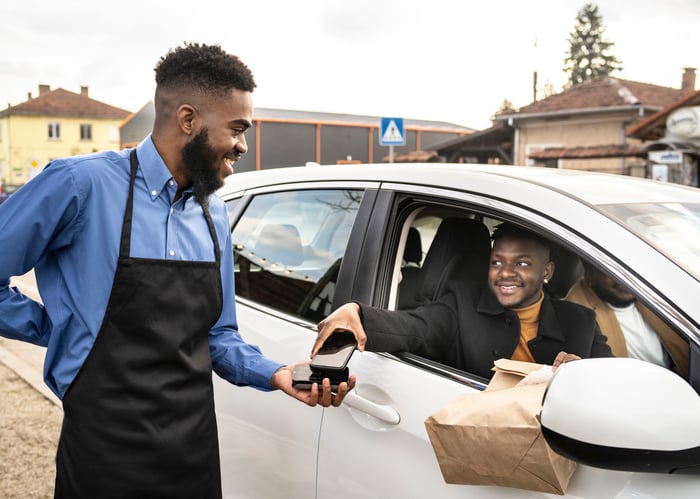 Starbucks is known for selling coffee, although its offerings include other drinks such as tea. Beverages account for three-quarters of revenue, although it also sells some food items. While its restaurants are split about evenly between company-owned and licensed locations, the former accounts for more than 80% of its revenue.

Last year was challenging with revenue falling from $26.5 billion to $23.5 billion. This covered the period that ended on Sept. 27, 2020. However, management estimates that COVID-19 caused sales to fall $5.1 billion versus its expectation. On the bright side, the company used the opportunity to improve its store efficiency, including introducing the Starbucks Pickup format that allows customers to use the mobile app to order and pay before getting to the location.

Management still expects comps to increase by 18% to 23% for the year. But it upped the company's earnings guidance, with the midpoint at $2.70, $0.18 higher than management's previous outlook.

DoorDash enables brick-and-mortar businesses, particularly restaurants, to offer easy and fast delivery. It has 450,000 merchants on its platform that connects to over 20 million people. The company is expanding into new areas, such as DashMarts, which are convenience stores that deliver mostly everyday items.

Judging by its revenue growth, clearly, its service has increased in popularity. DoorDash's revenue was $2.9 billion last year, a tenfold increase compared to 2018. But profitability has proven elusive, with its net loss more than doubling to $461 million during that time.

Recent results were more of the same in the first quarter. Revenue tripled to $1.1 billion, but losses only narrowed to $110 million from $129 million. Management doesn't provide guidance on the bottom line, but it expects adjusted EBITDA to come in at breakeven to $300 million for the year. This compares to $189 million last year.

DoorDash faces formidable competition, including Uber Technologies' UberEats. Additionally, while people have been ordering in during the pandemic, that'll likely decrease as restaurants lessen restrictions and people go out after being cooped up for so long.

On the flip side, Starbucks, after the pandemic hurt last year's results, has seen its top line ramp up. This seems likely to continue as it draws more customers as things return to some semblance of normalcy.

For me, in the battle between these two companies, Starbucks is the clear winner.